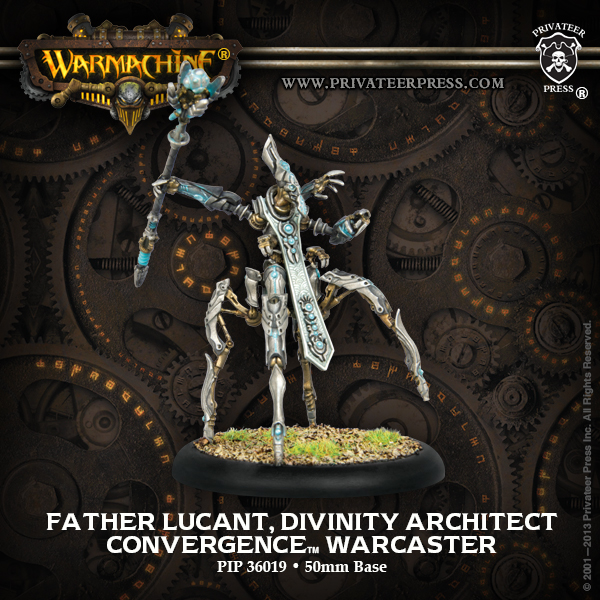 Privateer saved the best for last when releasing Convergence warcasters.  Father Lucant has arrived, and he means business.
Why is Lucant so powerful?  He protects his army on the approach, most especially from shooting, but also from magic and melee.  Once engaged, he helps his army hit harder and more accurately, while eliminating most defensive tech.  Not only that, for a support caster, he can personally put the hammer down in melee, and is in many ways more survivable than the Butcher.
First off, his Feat: +4 armor and automatically pass repair checks.  Affects all friendly faction models in his control area, which is a generous 14″ (16″ with the Corollary).  Defensive feats aren’t always viewed in the best light, but this one can be good enough that it’s basically a time walk.  The important thing is timing it correctly – too early, and you won’t get any benefit from the repair, too late and you may have lost too many models to get the maximum benefit from the armor bonus.  The best way to use it is after surviving an initial early round of shooting.  Good thing he has other ways to protect against shooting…
… like his Field Marshal: battlegroup models (including himself) get Shield Guard.  Wanted to shoot that Enigma Foundry?  Nope.  Wanted to disrupt the Corollary?  Nope.  Wanted to concentrate fire on one heavy to take it off the board before his feat?  Nope.  Can’t be purified off, and Convergence heavies (and Lucant himself) are Steady, so knockdown isn’t a way to get around it.
This theme of “Nope, you can’t shoot me” continues with Deceleration: +2 def and arm against ranged attacks, for every friendly model in his control area.  Stacked with feat turn, this can be dumb.  Angels at 18 / 18 are no joke, and neither are 8 wound Reciprocators at 14 / 26.  Lucant himself can be 16 / 27, no knockdown.   It’s a spell, so it doesn’t help against mage hunters and the like, but it’s not an upkeep, so can’t be purified off.
Well, maybe you wanted to cast spells at him?  In a pinch, he can use Dissolution Bolt to shut down channeling.  Somewhat niche, but as an added effect for a standard cost 2 pow 12 nuke, it’s quite nice.
Ok.. so… melee him?  Watcher says if you advance to within 6″ of him, one of his warjacks can move, then optionally attack.  If it doesn’t attack, watcher doesn’t expire, so this can be used repeatedly as a movement shenanigan.  If it does attack, it gets boosted attack and damage rolls.  Remember, Inverters knock down on any hit, so if you want to charge in with your heavy, be prepared to lose it for free.  Alternatively, if you’re charging in with a unit, make sure that unit has pathfinder, because a Cipher can drop a rough terrain template in places you weren’t expecting.
So he has a delivery system… what does he do once his army gets there?  How does +2 to hit and +2 to damage from Positive Charge sound?  This affects a jack and any faction models within 3″ of it.  You need to plan your positioning for maximum benefit from this, and it definitely helps to have reach models.  Reciprocators at mat 9 / pow 16 are really good.  You’d think mat 11 pow 14 eradicators would be really good too, but positioning is much trickier with them.  If you run a light jack into position beforehand for Lucant to cast and then attack, he’s mat 8 pow 18, with 6 attacks.  And with reach, speed 6, and pathfinder, he’s going to get there.
Good thing you have some tricks up your sleeve to make his job harder, right?  Purification means you’d better hope those defensive techniques don’t rely on animi or upkeep spells, because he’ll just get rid of them.  Arguments about whether this spell is bad for the game aside, it’s a really powerful ability that puts the finishing touch on the complete package Lucant brings to the table.
So does he live up to the hype?  Put it this way, I’ve had some struggles with the other Convergence warcasters, especially on split scenarios.  Lucant?  Undefeated in practice games so far. 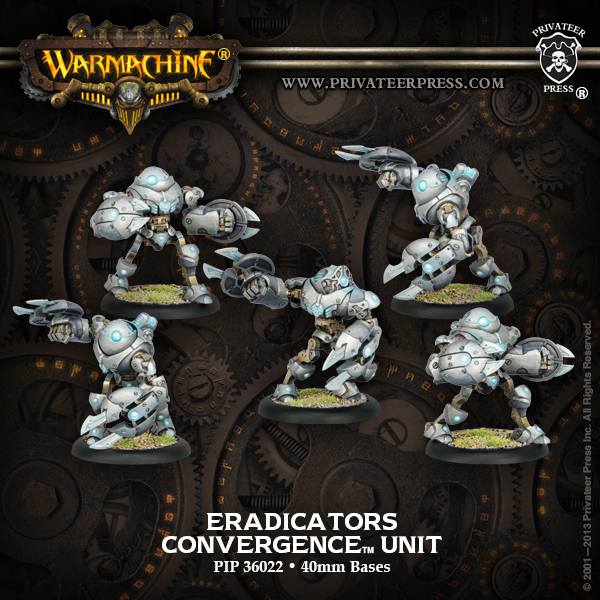