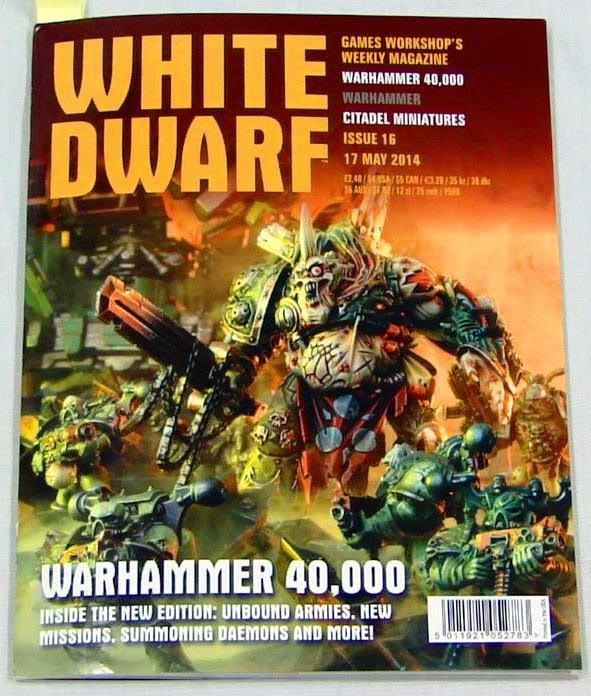 Buckle-up guys,  the latest White Dwarf was packed with a ton of new 7th Edition Spoilers!

Nearly the whole magazine was stuffed with new info and even a quasi battle report for the latest Edition debuting this Saturday May 24th.

This issue was a normal release of about 32 pages, (for $4) and was almost entirely devoted to the new 7th Edition release.

So if you were waiting for a “must buy” White Dwarf issue this may just be it!

Even though nearly every page in this issue is a preview of sorts for the new edition, they still managed to sneak in a few studio articles in the back, and another great organic paint splatter article on Wood Elf Dryads as well. Unfortunately there was zilch on the newly released  Apocalypse Warzone Valedor book (which features the Eldar/Dark Eldar vs Tyranids).  I’m working on a review for this interesting book, but it’s doubtful I will be able to finish even reading the whole book before 7th hits.

At first glance the new datasheets for both sides are solid. So it’s probably a good pickup if you play either faction and/or Apocalypse on the regular.

What I do have though, are the new spoilers for 7th Edition from this issue, and the more I read the more I’m liking this new edition! Here is (mostly) everything that could be gleaned from this issue about the new Edition of 40k. If you missed last weeks spoilers check them out here.

Shooting Attacks (I say “attack” loosely because RAW we can’t seem to find where shooting is even classified 100% as a shooting attack in the BRB).

All of the Vehicles

Boots on the Ground