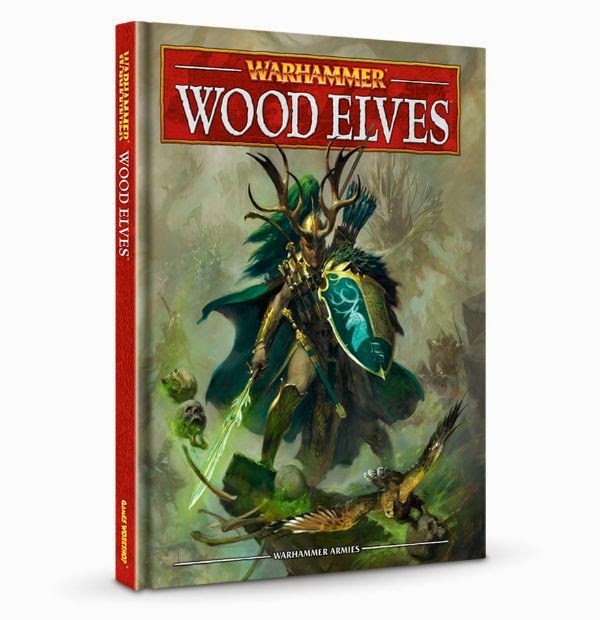 With the Wood Elves Armybook hours away, the rules are finally revealed.  Let’s take a look:

40Warzone is showing off a giant rules synopsis of the new Wood Elves, here is just a small excerpt:

Blessings of the Ancients: Any model with this special rule adds +1 to cast when in a forest

Ambush from the Worldroots: A Wood Elf army can place an additional forest (use a citadel wood) on the battlefield. This is done during deployment and must be placed wholly on your half of the battlefield. This is not mysterious terrain – declare it’s type when you place it. If you cannot fit it, love other pieces of terrain by shortest necessary distance until it’s possible to place. If a forest cannot be placed or the scenario means the Woof Elf army does not have a table half in which to deploy, this forest is not used.

Forest Spirit: Models with this special rule have the Forest Strider special rule and it’s attacks (shooting and combat) are magical. In addition, if the model is not a mount, it has a 6+ ward and Immume to Psychology.

Forest Stalker: Models with this special rule have the Forest Strider special rule. In addition, if at least half it’s models are within a forest:

– All models that have the Forest Stalker special rule fire in one more rank than normal (if the unit chooses to Volley Fire, this will mean that all the models in the front three ranks and half the models in forth and subsequent ranks are able to shoot)

– All models that have the Forest Stalker special rule can make supporting attacks with one extra rank than normal. This is cumulative with other special rules that allow models to fight in extra ranks.

– All models that have the Forest Stalker special rule (but not their mounts) re-roll all To Wound rolls of a 1 in combat.

Most Elven units also have, as expected, Always Strikes first.

Full Wood Elves Rumor Roundup
~So Fantasy readers, what’s your initial reaction? Was it worth the wait?
Subscribe to our newsletter!
Get Tabletop, RPG & Pop Culture news delivered directly to your inbox.
By subscribing you agree to our Terms of Use and Privacy Policy.

Author: Larry Vela
Dad, Gamer, Publisher, Pilot, Texan. All games all the time since junior-high. I started BoLS Interactive in 2006. I’m a lifelong tabletop & RPG gaming enthusiast, and internet publisher working to entertain and inform my readers every day. I've been playing RPGs and Tabletop Games since the 1970s. I'm been playing and covering Warhammer and Warhammer 40K for over 35 years.
Advertisement
Tabletop News Warhammer Fantasy Wood Elves
Advertisement