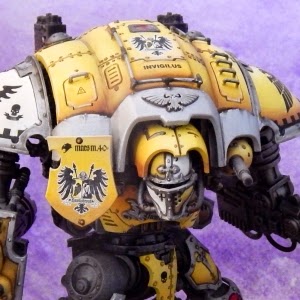 Here are some pictures of a Hawkshroud Imperial Knight Titan, Oathsworn to the Blood Angels.

Magicstorm here to show off my brand new Imperial Knight! I have a large Blood Angels army, which at my last count was over 15,000 points. I wanted my new titans to fit in with their comrades, and decided on House Hawkshroud. You can see the house colors on the titan, as well as a red knee with the Blood Angels symbol. Hawkshroud pilots have a very tight association with their brother of the Imperium and many carry heraldries of the armies that they accompany to battle. This Knights, that follow a path so close to the free blades are called the Oathsworn. You can see old posts on how I painted the knight, and what I did to its brother, at my blog: thepaintforge.com

Have you decided to add an Imperial Knight detachment to your army? If so, what made you determine which house and colors you would paint them?

Author: José Vélez
José is a long-time tabletop miniatures hobbyist and painter with over a decade of experience. He began covering the hobby and painting side of the miniatures industry for BoLS in 2014.
Advertisement
Hobby Imperial Knights Miniatures Painting Warhammer 40k
Advertisement

40K Retro Corner: Realm of Chaos - Lost and the Damned