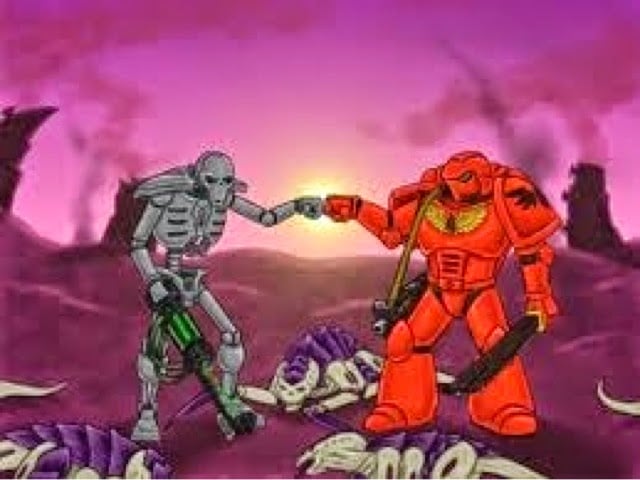 We all remember how annoying Battle Brothers were in 6th edition. Well, with the new changes in 7th edition, a lot of players may be feeling… desperate.
Jifel here, Tyranid veteran and Internet enthusiast. Feel free to check out more Tyranid fun on my personal blog, at Knighthammer 40k.
Desperate Allies have received a massive buff to their rules. Why? Scoring. Desperate Allies are now scoring units that can potentially have Objective secured, and this makes them incredibly versatile. As a matter of fact, if you ignore the fluff, and plan a little bit, you can conceivably bring any two armies without too many consequences. The Desperate Allies rules say that any time a unit is within 6″ of a desperate ally, roll a d6. On a 1, they basically can’t perform any activity as they eye each other warily. Come the Apocalypse is now the exact same rules, but they may not be deployed within 12″ of each other.
Why would you use Desperate Allies?
Well, no army is perfect, and most have something that they clearly struggle with. Dark Eldar have trouble dealing with Flyers, while Orks often struggle to dent high armor values at range. With now almost any army to choose from, each of these armies can cherry pick someone to help them out! But, because of the disadvantages that Desperate Allies include,  you must be very careful when selecting them.
1. They should have a very specific role to fill:
Maybe your Ork tide struggles with Land Raiders. You could ally in a Ravager, a small warrior squad with a blaster in a Raider, and an Archon with blast pistol. This is 300 points for two fast moving units which can unleash 3 lance shots each, if the Raider is close enough. Also, fast scoring units are never a bad thing. The only downside is that your opponent will refer to your army as “DOrks”. Identify what your army is bad at, and identify an army that is good at this!
2. Have a plan to avoid getting too close:
You would like your allies to operate separately to avoid the tension of being within 6″. So, either make your allies fast enough to avoid this problem (like the Dark Eldar detachment above), or make them able to sit tight and not have to move. If DEldar need some anti-air help, then they could easily pack in an Astra Militarum Veteran squad, command squad and two Hydras. This little bubble can just pick a corner with an objective and hold tight while your main force moves around freely. 3. Why are they working together:
Wait, what? I thought this was a competitive article? Yeah, sorry about that. I love winning, but I love the game and it will be more fun if you have at least a semi-plausible reason to include allies. For example, some Dark Eldar are just taking advantage of an Ork invasion to sneak off with a few Space Marine prisoners, as it is far too dangerous to attack them alone… If you read the fluff, almost any alliance is supported in some way. Just take a few minutes to think of a reason, maybe sneak a few conversions in there if you’re daring, like Genestealer claws on your Imperial Guard sergeants.
4. Keep it small!
The fewer Desperate units you have, the less likely that they get close to your main force. Two Dark Eldar skimmers are easy to keep on the sidelines as a raiding party, but a 50 man AM blob will probably get close to your Chaos Space Marine Rhinos at some point.
5. Could other Allies do it better?
This one is mostly for the Imperial Armies. With an Imperial Primary, there’s really no reason to ally xenos as you could just take one of your many battle brothers for the same role. For this reason, I would really only recommend taking a Desperate Ally if you play a xenos army and are encountering a particular need that you just can’t fix otherwise.

A note on Come the Apocalypse:
The only difference between Come the Apocalypse and Desperate Allies is that you may not deploy within 12″. For this reason, I would say that this alliance requires an extra focus on mobility. There’s a decent chance that you will have to place your allies a bit out of position, and this can hurt them if they aren’t fast enough to correct that soon. On the other hand, this can be exploited through reserves. Who cares about deployment when those Allies are two Drop Pods full of Meltaguns? They can easily hit an entirely different part of your opponents line than your Heldrakes. Maybe they’re recent converts to your Red Corsairs army that haven’t given up their Drop Pods yet! Flyers are also good choices, as they don’t deploy. A pair of Night Scythes makes a very valuable addition to a gunline army that struggles with scoring.
In Conclusion:
There are now so many Allied combinations that I can’t possibly list them all. So, I’m interested to hear what you guys think are the top Desperate Allies and come the Apocalypse team up? Personally, I love DEldar and Orks! I’ve also added an Imperial Knight from House Mortimer to my Tyranid army, to great success.
Let’s hear it! Comments, Criticism and Creative answers are all more than welcome! How will the new rules change your alliances?