The DiRT – Everything We Know About Operation:Icestorm 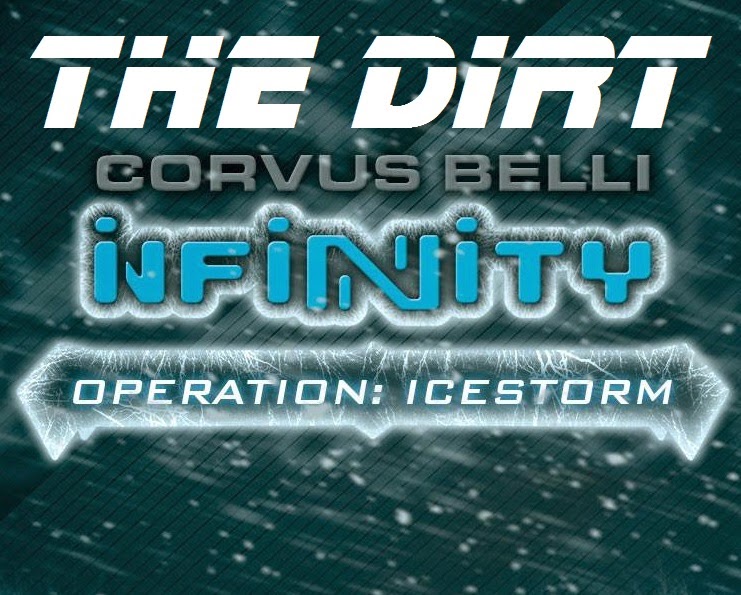 The News – Operation:Icestorm Daily Images
Last week on Corvus Belli’s Facebook page and here at BoLS’s Gamewire, fans of Infinity were treated to a daily dose of images leading up to the announcement of Operation:Icestorm.  If you have not seen the images yet, let me go ahead and post them all here right now.  That way, when you get to the Skinny, we can talk about what we should expect to see from Operation:Icestorm. The Skinny – Deciphering the Transmission
So what is Operation:IceStorm?  Before I answer that, please know that I did not receive a line item list of what’s in the box.  None of what I’m going to reveal is officially Corvus Belli, so I could be wrong.  But my years of making predictions on the RTD (Round Table Discussion for long time Doremicom YouTube followers), I’m pretty confident in what I’m predicting here.
The DIRT
There are some more things that you can see in that image, but I fear that my speculations get even more crazy when I think about it.  There is a half circle coming off of the play area, did CB add templates to the box too?  I’m thinking not, but it could be that there are paper templates that you can cut out of the Quick Starter Rules.  What about the fact that the models are on a huge shadowed area.  While I think there’s some 3d terrain in there (as I mentioned above), could there be more?  I really can’t say.  But even if we stop with what truly believe will be in the box….. there’s a lot to get excited about.

As I said in previously, as I continue to get Infinity pictures I will add them to my articles.  Send your Infinity pics to [email protected]

So that’s the news, the skinny, and The DIRT on Operation:Icestorm.  What models do you think will be in the Operation:IceStorm boxes?  Fusiliers are a pretty safe bet.  There’s one blue shadow with a sword in the air which to me just seems like a PanOceania Knight.  Until Corvus Belli pulls the shadow back and reveals all their Opeartion:IceStorm plans, drop your guesses in the comment section below.  As always find me here, my YouTube Channel, or drop me a line with Infinity photos at my new email address [email protected] .

Author: doremicom
Doremicom has been a tabletop wargamer for over a decade. His area of expertise is Corvus Belli's Infinity: The Miniatures Game. He began writing for BoLS in 2015.
Advertisement
Infinity The Game Tabletop News
Advertisement