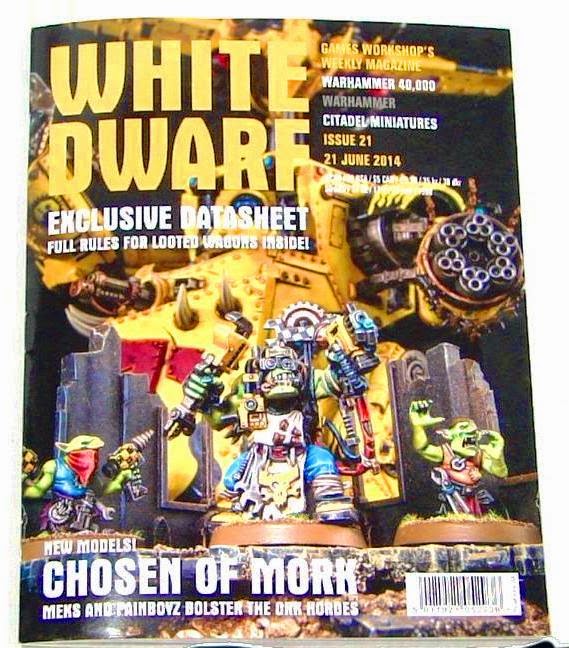 The Orks are coming for sure, as this issue is crammed full of spoilers for the new book, and even hints at the following week’s release (Mega Nobs?) as well.

While we have no “official” confirmation on the new Mega Nobz being released, the latest issue indicates we’ll see the “biggest Ork models ever” next week, so my fingers are crossed that it’s Mega Nob time!

If you haven’t seen the new Mega Nobz yet, checkout the spoiler shots from issue #18.

My biggest question is will they be on 50mm bases, and/or do they come in a three or five pack? Also in this issue was the rules for the new Looted Wagons which looks to be a White Dwarf exclusive and not included in the new codex (which releases June 28th).  At first glance the rules seem to be pretty good as low point cost Deff Rollas could be fun to run around the field, providing the rules stay the same from the last book. This issue also featured a unique battle report that featured Tyranids vs the Orks, and from the looks of the published army lists, they both seemed to be in the unbound format. Either that or there is something that the Orks have in their new book that allows some greater flexibility in their force organization. Paint Splatter was again back, and this was a great one that showed just how to paint all those little details on Ork models that really make them stand out from the rest of the pack so to speak.

Probably one of their best Paint Splatter articles yet just because of the wise spectrum of techniques it covered just in one article.
This Paint Splatter article also states that the next issue’s will cover painting armor, so yet another hint perhaps at an impending Mega Nob release as well.
Get ready for the coming of the Orks this week.