X-Wing:Huge Ships & What Everyone is Missing! 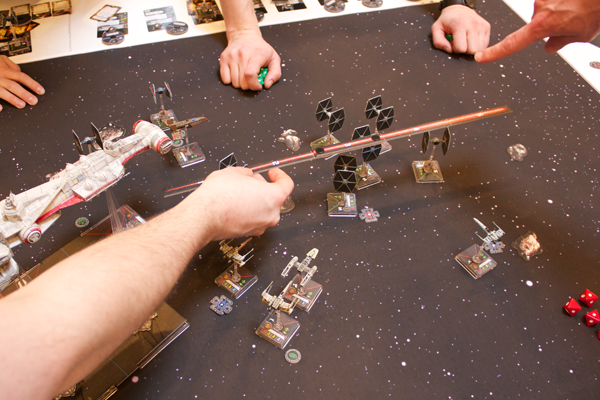 Everyone has been looking at the Rebel Transport and Tantive IV and coming up with fun Epic Play builds and other ship crushing tactics.  But what are we missing?

Having picked up my Epicly Huge Correlian Corvette/Blockade Runner/Tantive IV I was comparing it to the recently released Rebel Transport with a view to its value in “normal” play.

Lets be honest, we are all collectors and chances are, if you play X-Wing you will pick up Huge ship at some point.  With this in mind I was going to do a review of the upgrade cards and the additional pilots in the Transport and whilst I will cover some of the stand out cards/pilots in a later article I mainly wanted to cover one rule that comes with both Hugh ships that I have not yet seen discussed.

So, jumping right to my point.  Why spend the money on a Huge ship that you may only use in epic format once or twice or even not at all if you are a loyal son/daughter of the Empire?

Well obviously FFG had thought the same thing and wanted to give us all even more reason to buy there stuff other than love of the hobby.  As most X-Wing players know Asteroids and their placement are rather fundamental in how a match plays out with people going as far as to under-point there lists to have the advantage of placing the first space rock.  FFG thinks this is quite important as well and added the following rule to both Huge ships.
Using the CR90/GR-75 as an Obstacle

“Players may use the CR90/GR-75 ship as an obstacle instead of as a Rebel ship during a standard game.”

What this does is lets you plonk down a whacking great big space ship in stead of 3 piddly asteroids!
Are you planning on flying a TIE Swarm and want more room to maneuver without dodging annoying little rocks, take a GR-75 and stick it off to one side and enjoy a much more open field of battle.  Planning on hanging back against some long rages opponent while they close with you, take the CR90 and put so you can fly behind it gaining the Obstruction bonus for a few extra turns.
This opens up a new batch of tactics in the deployment phase but only if you rush out now and pick up your huge ship…

Cheers people, hope you enjoyed the block of text and check out my blog for more Wargaming goodness at The Dice Hate Me  ~Kris

So what do you guys think? Is this pay to win or just opening up more variation in play and strategies and would you die hard Imperials consider buying one of the (currently) Rebel only big ships just to take advantage of some of the options this opens up?