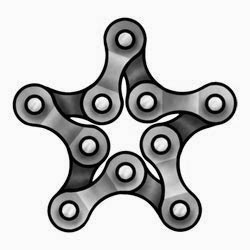 Get ready for a meaty detailed 7th Battle Report between Bikestar (WhiteScars/Wolves) vs Bugs!

I am preparing for the upcoming American Team Championship (ATC)… which is THIS weekend!  My last batrep here versus ScreamerStar there were a few mistakes with the rules on both sides, which is to be expected since 7th edition is still quite new. Hopefully this game we got it all right. Let’s begin!

I am running the BikeStar…

NOTE – I wanted to give Biomancy a test run since if the Rune Priest should get Iron Arm it turns him into uber beast mode plus Life Leech is great for restoring wounds to any of the multi wound characters in the BikeStar. Alas it wasn’t to be. That said Enfeeble came in quite handy a couple times.

NOTE – I forgot to record my opponent’s psychic powers… Sorry! The Tervigon had Paroxysm. One of the Flyrants had Warp Lance and Paroxysm. 3 Primary objectives (each worth 8 points for win or 4 points for a draw):
— Kill Points
— Emperors Will
— Crusade (4 objective markers, two of which can’t be placed in ether deployment zone)

So there are a maximum of 30 point total.

We roll off to choose deployment zones—I got the side to the right. The Crusade objective markers were liberally scattered around the table. I place my Emperor’s Will objective right at the left corner of my deployment – I never try to hold it by the way – my opponent places his behind the Bastion.

I deploy as follows – all three bike squads spread out all the way up and facing right across from my opponent’s castle. BikeStar is furthest to my right and closest to the enemy Knight.

My opponent then infiltrates two Crones and the non Warlord Flyrant up in front of the multi level ruin in his development zone. I then scout move all my bikes straight ahead.

The Battle is Joined!

All four FMCs zoom ahead and position their bases side by side to block off forward movement for the bikes. The Warlord Flyrant lands in a big ruin in the center of the table beside the BikeStar. 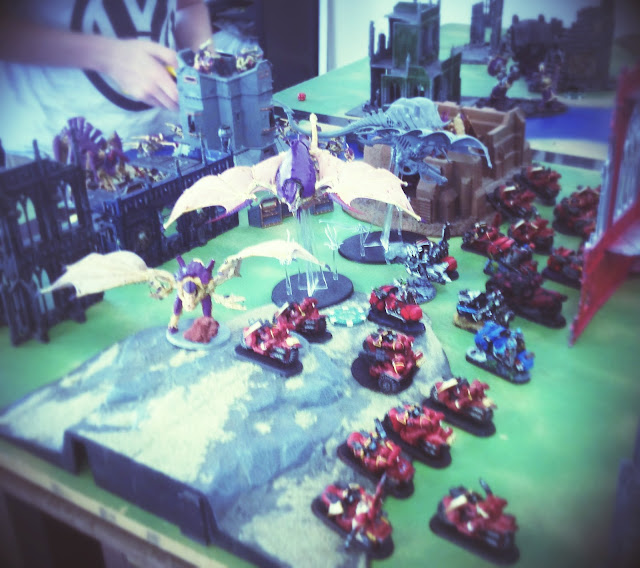 A Flyrant successfully casts Paroxysm on the BikeStar reducing their BS and WS by -2.

Lots and lots of shooting then commences – one bike squad is reduced to a couple bikers (sergeant and one grav gunner) who pass their leadership test. Also the Rune Priest loses one wound.

The Grey Hunters drop pod lands on top of the multi level ruin beside the Bastion and does not scatter. 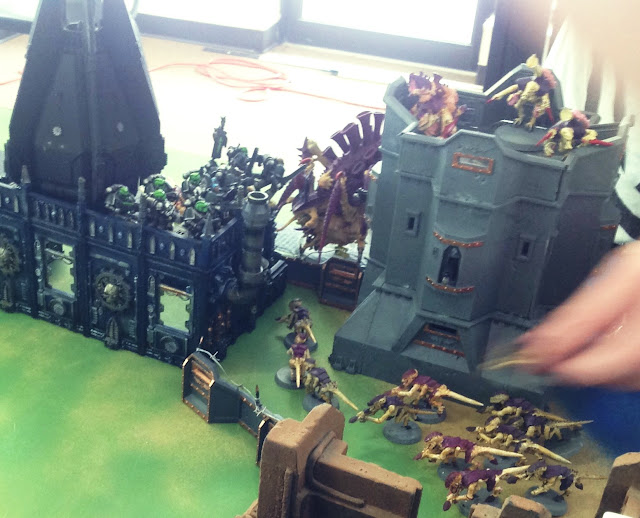 The BikeStar moves up to surround the WarLord Flyrant.

The intact bike squad flanks around forward and to my left moving behind all the FMCs. The remnant bike squad drops back behind terrain in an attempt to hide and stay alive.

Nothing much to note occurred in the psychic phase this turn… Rune Priest failed to cast Enfeeble on the Warlord Flyrant and Smite failed to hit.

The Grey Hunters unload their plasma weapons and bolters into the Tervigon and manage to strip two wounds. The drop pod targets the gants and pops a couple. The intact biker squad targets the Warlord Flyrant but fails to inflict any wounds. BikeStar then unloads into the Warlord Flyrant, strips one wound but it passes it’s grounding check… Drat !!

Rippers fail to arrive from reserve.

The FMCs all zoom again spreading out – Warlord Flyrant and one Crone exit the table, killing the grav gun biker in the remnant bike squad with a Vector Strike but fortunately the other attack failed to inflict a wound (no First Blood). The traitor Knight ambles over beside BikeStar. The Tervigon poops out nine more baby gants out to its right.

The psychic phase goes off again and the remaining Flyrant successfully casts Paroxysm on BikeStar but only reducing their BS and WS by -1 this turn.

The shooting then commences… The Tervigon and gants only manage to take down three of the Grey Hunters. Note the lone biker sergeant is out of enemy line of sight. The rest of the shooting (including the traitor Knight) is focused on BikeStar but comes up empty… Pretty amazing.

The Knight then charges BikeStar – I lose only one command squad biker, the Chapter Master takes a wound then they make the Traitor Knight go BOOM for First Blood !

Lots of 6s to penetrate with the thunderhammer and meltabomb attacks… It can happen. The ensuing gianormous explosion does not scatter and again BikeStar takes no damage. BikeStar then consolidates forward into the ruin.

The big gant brood then charges the Grey Hunters. I lose one more Space Wolf and chop down four of their number.

BikeStar moves into position to multi-assault the Bastion and gants. The full biker squad races around behind the multi level ruin. The lone biker sergeant moves as far as possible away from the main action in order to split up the Tyranid FMCs.

Again the Rune Priest is ineffective in the psychic phase… Oh well.

The full biker unit opts to target the Tervigon instead of the nine freshly shat gants and strip two more wounds.

BikeStar then multi assaults the big gant brood and the Bastion. Bastion goes BOOM… Amazingly one gant survives to keep both the BikeStar and Grey Hunters locked in combat. One Biovore takes two wounds and the implosion crushes the Venomthrope.

Rippers arrive from reserve and deep strike close to a Crusade objective marker.

Both the Warlord Flyrant and Crone return, zooming over the BikeStar but fail to inflict any wounds with their Vector Strikes. The other Crone goes after the lone biker sergeant. The Tervigon shats another 10 gants and poops out whom form a shield around it.

The Tyranids fail to cast Paroxysm on BikeStar… w00t!!!

The lone biker sergeant manages to avoid death yet again and Warp Lance strips one wound from the drop pod.

BikeStar then eliminates the last gant from the original brood and consolidates towards the Tervigon.

The BikeStar moves into point blank range to assault the Tervigon… They will need to find a way to remove the gant screen. Grey Hunters back up into the multi level ruin training their guns on the new gants while the bike squad moves into position to shoot and assault the freshly hatched gant brood. The lone biker sergeant scoots into a ruin on the far side trying his best to hive again.

The Rune Priest successfully casts Enfeeble on the gants screening the Tervigon from BikeStar. His other psychic powers both fail to go off.

The Grey Hunters shoot first removing enough of the gant shield so that BikeStar can assault the Tervigon. The bike squad vaporize the other gant brood.

BikeStar then multi assaults the Tervigon and last of the gants removing them from the table. BikeStar consolidates behind the multi level ruin.

The Flyrant and Crone arrive via Ongoing Reserves. So my opponent has left two Flyrants, two Crones and the Rippers. I’ve got BikeStar (mostly intact), biker squad and the lone biker sergeant.

Rippers move in position to claim one of the Crusade objective markers. Both Flyrants zoom in position to focus fire on the biker squad while the two Crones go after the lone biker.

Nothing to note happened in the psychic phase.

Shooting sees the lone biker sergeant finally snuffs it. The biker squad is also eradicated by overwhelming fire power from the dual Flyrants.

BikeStar moves into position to shoot and assault the Biovores.

The Rune Priest successfully casts Enfeeble on the Warlord Flyrant and suffers a wound from Perils in the Warp.

BikeStar shoots up the Biovores.

It could be the last turn. One Crone lands to grab my Emperor’s Will objective marker – the other one also lands to grab another Crusade objective Marker. The Warlord Flyrant zooms on top of the multi level ruin to target BikeStar. The other Flyrant will shoot them through a window.

Again nothing to note happened in the psychic phase.

Focused fire on BikerStar reduces the unit to just Khan, Chapter Master and the Wolf Lord.

BikeStar moves back into the ruin and fans out around the Emperor’s Will objective marker.

BikeStar then targets the Flyrant and manage to strip another wound bringing the beast down to its last wound.

We roll to see if the game continues – it ends.

I knew it would be a tough game. To be honest even though I did try to seize – so I could possibly gun down a couple of FMCs – going second worked out well since I could always react to my opponent’s movement.

The Grey Hunters were clutch tying up the large gant brood long enough for BikeStar to hit the Tyranid line and also inflicting a couple wounds on the Tervigon on the drop. The Grey Hunters also cleared out a gap in the gant screen via shooting so BikeStar could multi assault the Bastion and Tervigon – taking them both down on the charge.

I’m starting to really like Biomancy as the go-to psychic lore for BikeStar. I didn’t roll up any of the really good psychic powers but twice Enfeeble was very helpful. Iron Arm, Endurance and Life Leech are all really good for BikeStar.

I baited the Knight with BikeStar and that worked out well. I have faced lists with multiple Knights back in 6th edition when D was a whole lot nastier so I wasn’t too worried about the one… BikeStar can kill most anything on the ground. BikeStar eliminated almost every enemy ground unit this game except for the Rippers. I had some hot dice versus the Knight at full strength with BikeStar but even if it had managed to survive the first round of melee I could have Hit and Run out.

It’s really hard for Bikestar to deal with flyers and FMCs while they are up in the air so I ignore them as much as possible. Tyranid FMCs are not a threat to BikeStar in melee – I love the new rules for challenges as it really helped to better balance this aspect of the game.

The lone biker sergeant drew a lot of heat off the rest of my army for several turns and managed to last a lot longer than I expected. His role as a distraction was fulfilled.

I played to the mission knowing I’d have to get across the table as quickly as possible. I never play to hold my own Emperor’s Will objective marker as that goes against the main strength of the army.

In the end it was close but BikeStar tipped the scales in my favor. I hope you enjoyed the battle everybody! 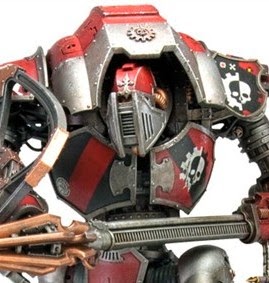