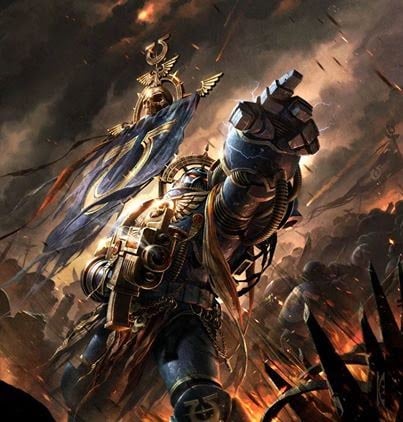 With the release of the new Stormclaw two player starter, I wonder if our beloved 40k doesn’t need more new player entry points.

Miniature games are a huge undertaking for any new player. In my experience players typically have the best transition into strict miniatures games ( 40K, War Machine/Hordes, Flames of War) through gateway games like Fantasy Flight’s X-Wing or board games that utilize miniature game mechanics like Descent or Tannhauser. That isn’t to say that I don’t get more than a fair share of customers who see the terrain, see the pieces and are attracted into the genre solely by the visual aspect.Yet, despite Games Workshop’s stunning miniature line, I find myself skewed towards offering the competitors to newer players. This comes down to a couple different factors, and can be compared to the new Stormclaw box set for validity.

It’s also important to note that when I speak of new players, I’m not speaking about players switching from another miniatures game, but players that are coming from the aforementioned “gateway” games or coming into the hobby completely cold.

It’s All In the Price Baby

We veterans of war-gaming have taught our wallets to understand the swift backhands it gets from GW products, and over time some of our wallets have learned to love the abuse. Yet, GW’s price point isn’t new gamer friendly, or even transitional gamer friendly. A player coming from X-Wing is used to spending $14.95 per ship, but only needs 5 ships max for their lists.  Then to come into a world where you’re buying 4-5 boxes of miniatures at $59.95, codexes at $49.90 and then the giant rule-book for $79.90, is a whole other tier of spending for players. Even after explaining that the start up cost is high and eventually has a huge drop off, the initial investment into GW games usually has players searching for a cheaper alternative. New players don’t care about the amazing customization that comes with GW kits,  the quality of the plastics or anything of that sort because they either don’t have a frame of reference or the start up cost is enough to glaze their eyes over. Players tend toward games like Dropzone Commander, which prices it’s rule-book at $20 and uses it as their loss leader. GW has no loss leader, or at least nothing that’s inherently obvious to new players.
Now let’s talk about the Stormclaw box set, which is priced at $125 or the revised Dark Vengeance set which is priced at $110. Both sets are a fantastic deal for the amount of miniatures you’re getting and a solid foothold into the world of Warhammer 40K. It’s unreasonable to think that a new player is going to spend at minimum $110 to buy the starter set for a game, or is now charged with wrangling a friend into the investment with them. Meanwhile, in Privateer Press Fun World, players can purchase faction starters–known as Battle Boxes–for $49.95 which is much more realistic price for new players.  It’s ultimately the  about same price point if the player split the Stormclaw set, but it feels more convenient to new players. They now have the freedom to choose what faction they want, and aren’t tied to either paying for another faction they don’t need or hogtying a friend into the game with them. A player driven into War Machine by the aesthetics of the Convergence army, can purchase a stake into the army that interests them. They aren’t forced into playing Chaos Space Marines because, ” Well, I bought this starter and it came with the starter, so now I play them or pay more money for the army I actually want.”
Granted, players always have the option of piece-mealing armies by the box or blister. It’s unreasonable to me, though,  to think a new player is equipped to  make those decisions. What’s a character model? Are these models with guns better than those models with hammers? They need the stat sheets and to interpret the stat sheets they need the rule book, which brings us back to a initial investment of around $130. Weird, the same price of the starter box. So yes, the starter box is a better jumping off point for new players, but at it’s current price point and make-up isn’t an attractive or convenient option for those players.

GW’s current stance on new players hinges on brand recognition and nothing else. It would take nothing to offer abridged versions of the rule-book, faction specific starters or visible loss leaders. It comes down to the fact that GW owns the miniature market. Every new guitar player wants to own a Fender. Why?  Because it’s the brand that everybody knows and slapped on tacky merchandise sold in Wal-Marts and Hot Topics across the US. It’s the same principle for GW: “When the term “miniature games” is synonymous with our company, why should we have to worry about new players?” You don’t GW, retail owners and shop workers have that task.  We thank you, for allowing us the task of picking up your pieces, cobbling them together and trying and explain your “veteran” only club to new players. Take a cue from other companies GW, focus on making your game more “noob” friendly.
What do you think? Let me know your experiences as a new player and how they stack up with my assessment in the comments below. If you want to see more angry rants from me, click here.