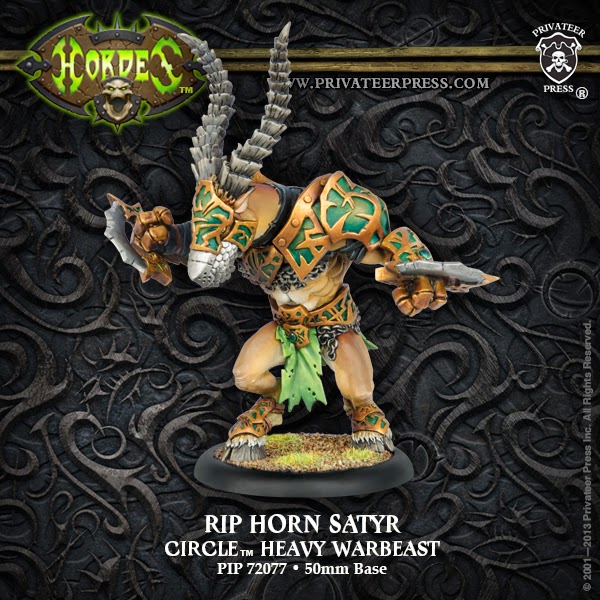 After a long wait, the new plastic Satyr kit has finally arrived, and with it, the means to build the Rip Horn Satyr previewed in Gargantuans. Was it worth the anticipation?

A quick glimpse of the Rip Horn Satyr reveals that it is a melee-focused heavy warbeast with some utility for gaining good board positioning through its animus, Irresistible Force. Starting with its stat line, it’s a SPD 6, MAT 6, DEF 12, ARM 19 heavy with 26 health boxes distributed fairly evenly among aspects with a slight advantage on the Body side. It has three melee attacks, two of them Open Fists, at P+S 16. In addition to this, it has Aggressive for free runs and charges, Hard Head for making slams and head-butt power attacks P+S 16, and Chain Attack: Grab & Smash, allowing the Rip Horn to make one of several different power attacks if it successfully hits with both of its Bladed Gauntlet attacks. Its animus, Irresistible Force, grants the Rip Horn Bulldoze, which will push enemy models that it moves into during its activation 2″ away from the Rip Horn.

All things told, the Rip Horn is a fairly simple package. It brings a little bit of utility with Irresistible Force, but the Rip Horn seems largely about picking something big and scary and punching it into slurry. Since it has Aggressive, Chain Attack: Grab & Smash and Hard Head, the Rip Horn is capable of putting out a huge volume of attacks. Normal order of operations would be to charge the Rip Horn’s target and start with both Bladed Gauntlet attacks, follow up with a head-butt via Grab & Smash, make its Horn attack, then continue buying attacks on the knocked down target with its remaining four Fury. Against some of the more modestly armored heavies out there like Ironclads, Vanquishers, or Titan Gladiators, the Rip Horn is capable of putting a tremendous amount of damage into them with just average rolling and without buffs.

If damage output is a problem, the Rip Horn can always use Grab & Smash to two-handed throw its target into the arms of another source of high-damage.

While MAT 6, P+S 16 on all of its many attacks is not particularly exciting, the ubiquitous Gorax light warbeast more than makes up for this via the Primal animus, granting the Rip Horn +2 to melee attack and damage rolls at the cost of automatically frenzying during the following turn. This gives the Rip Horn the capability to threaten more heavily-armored or high-DEF targets that MAT 6, P+S 16 might otherwise struggle with. Other potential options here might include Kromac’s Unnatural Aggression for boosted attack rolls, effectively weighing the odds more heavily of being able to trigger and execute Grab & Smash, Kaya the Moonhunter’s Forced Evolution for increased STR and DEF for a damage buff, or Curse of Shadows from either Cassius or Mohsar to debuff the target’s ARM.

Defensively, the Rip Horn is pretty solid, at base ARM 19 and 26 Health boxes, the Rip Horn can take it on the nose pretty well for a Circle Orboros living warbeast. If you can buff his ARM via Roots of the Earth or Inviolable Resolve, it will make the Rip Horn even more difficult to dislodge.

The Rip Horn’s animus, Irresistible Force, can potentially pair quite well with Chain Attack: Grab & Smash and Aggressive from a utility standpoint. If a hardened heavy warbeast, like an ARM-buffed Titan Sentry or ‘Ol Rowdy, is occupying a scoring zone, you can charge it for free via Aggressive, use Bulldoze to push it back two inches, lead with the Horns attack on the charge, attack with both Bladed Fists while boosting attack rolls to ensure you hit, then boost the attack on a two-handed throw to move the target outside of a scoring zone, hopefully into a pile of enemy infantry. While this will often lead to trading the Rip Horn on the following turn, it can be an effective means to score a point in scenario play if you really need it. I believe that both are still viable options and that neither supplants the other in all cases; it largely comes down to what your list needs more. Being able to achieve SPD 8 with MAT 7 makes the Feral Warpwolf a solid trampling warbeast, which is certainly an advantage it has over the Rip Horn, while Irresistible Force and Grab & Smash grant the Rip Horn a certain measure of board control that the Feral Warpwolf lacks.

Stay tuned for Bell of Lost Souls for more Hordes and Warmachine coverage! 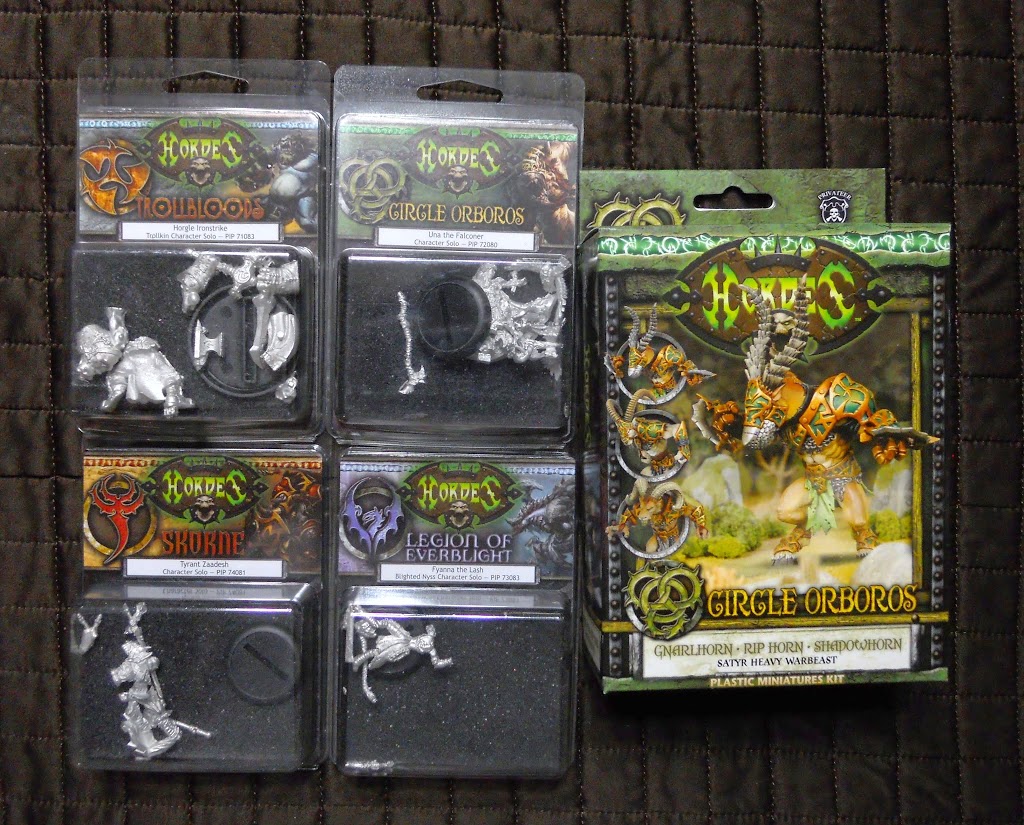