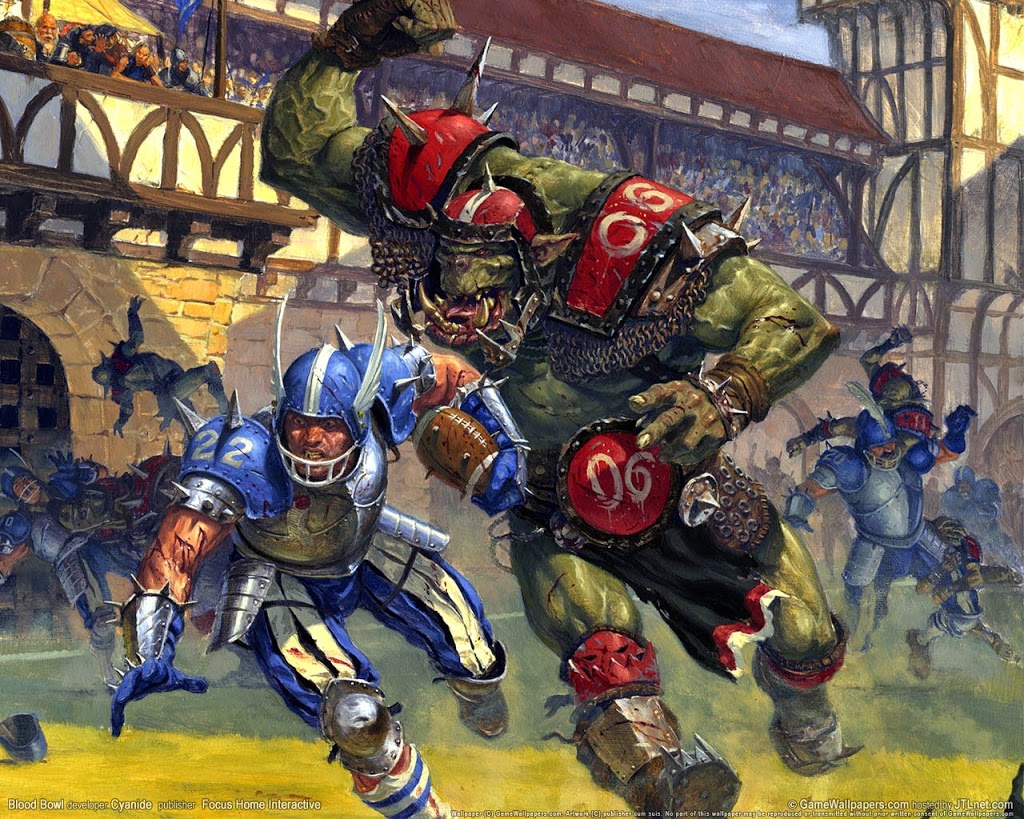 NoName1 here with, for once, a post *not* about my beloved 40K. Today, I’m here to talk about one of the least talked about offshoots of 40k/WFB: Blood Bowl!

It’s a shame it’s not talked about more, really – it’s a small scale Skirmish game, the rules are free, and there’s endless opportunity for custom modelling.

I went with my WFB first love, Lizardmen! And I scoured E-bay for some used/beat up old models that I could really have fun with.

For those who don’t know, Blood Bowl is – in essence – a particularly violent Football (American Football) played with custom WFB miniatures as one of 20 or so teams. There are rules for different cups at whole seasons in the free (did I mention FREE?) 6th Edition “Living Rulebook” that are an absolute blast to play with friends on the small scale. A “field” can be as simple as a 2′ square (ish) “pitch” of green felt with lines drawn on it, you could carry the field, several teams, and rulebook on a bike with hardly any effort.

There are official Teams available (including the third-party “Elf Ball” knockoffs), and a number of custom teams out there, but they tend to be fairly expensive, and I decided to take the long frustrating route of making my own custom team from scratch.

Without further ado, here’s my rough start for my models (be warned – the picture quality is right on par with the current state of the models…) I got lucky with this one, my team’s lynchpin, the Kroxigor. I had a hell of a time finding a single model under $20 (which was pretty steep for a single BB team member) but I finally found this one, and I’m really glad I took the time – this model is a better scale, much cooler pose, and is positively classic looking. The new ones are better models, but they almost all have a kind of “KROX SMASH!!” look to them. Very pleased with this one, and can’t wait to put paint on the model! I used a Saurus Shield on the shoulder, where I’m going to paint on this guy’s player number Saurus! These bruisers are my Linemen, modded mostly from an old Saurus Command kit (now these models aren’t even available). Again, I used some shields (Skink this time) as shoulder pads, where I’ll put their player numbers (looks a little janky on the shield guy, we’ll see how that turns out…) The team so far, as of the middle of last week. And then, my Skinks! They’re small enough that I’m not sure where their player numbers are going to go, but I’ll figure something out. These beauties are also out of production (OOP) models from a Skink Command regiment. And here’s the whole team, pre-painting. You may notice most of them have some form of weapon in their hands, but I made an effort to have at least one hand free on each model. The only things left are those that would likely destroy the model if I tried to remove them. We’ll call them good-luck charms, but I expect the dice gods will curse me with many fumbles for playing a largely one-handed team. Last picture, can’t wait to get some paint on them!

And that’s my progress so far. Anyone else have any experience with, or fond memories of, your own Blood Bowl exploits? Share pictures if you’ve got ’em!

Author: Noah Hallett
Noah is a tabletop wargamer with a decade of experience. His specialty is Warhammer 40,000. He began writing for BoLS in 2014.
Advertisement
BloodBowl Hobby Miniatures Painting
Advertisement