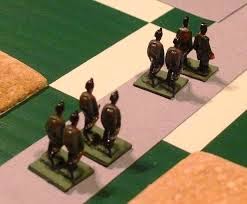 Greetings and salutations, BoLS Faithful, and welcome to another Terrible Tuesday.  While your host hasn’t quite kicked the ol’ hobby apathy…

…it could be said I’ve taken the first, healthy steps on the Wargaming Road of Recovery.  I understand it might lead toward balance and moderation in the pursuit of hobby satisfaction.

“What are these healthy steps?” I hear maybe two of you asking.  I’m glad you brought it up!  I spent a few evenings and most of the day Sunday organizing my hobby space, going through all the boxes and taking inventory of what I have.  I need to make some decisions on what to keep and what to discard.

I’m almost ashamed to admit… but I borrowed my wife’s label maker and went to town identifying all the different levels of crap.  Consequently, I’m sitting here with the MacBook in a comfortable space, surrounded by a legacy of metal, plastic, and resin.  No doubt I’ll turn it into a topic as some point in the near future, but currently that’s not where the Empty Digital Headache is leading me.

What I want to talk about instead is simple:  right now 40K 7th Edition is the game everyone loved first and loved best, but it’s just lost a bit of sheen.  It may be your first love but c’mon!  With all the  little disappointments and the rising cost of dates, you’ve come to realize Infinity dresses better and WarmaHordes does a bit of light spanking on the side.  You don’t even have to hint – it’s right there in the contract.

For my money, Infinity plays like a tactical first person shooter.  I’ve only recently taken the dive, but what finally did it for me was a gut-level understanding of just how great it is to play a game on a board really dense with terrain.

Please don’t tell me you can do that with 40K; the point is, we don’t.  What I’m talking about here is really dense line-of-sight blocking terrain!

You don’t need me to spell it out.  Much of the terrain we all play on was either produced by Games Workshop – meaning Cities of Death buildings and ruins – and it’s all so much swiss cheese.  In fact, the rules and the terrain are so loose most people just assume it’s a given line of sight can be drawn “somewhere in that mess.”  Know what I think the phrase most often heard in modern 40K is?  “Go ahead and take a cover save.”

Wouldn’t it be cool to play a game in a city block a la Stalingrad?  Tall buildings, dense rubble, short ranged, ugly firefights, and brutal close combat inside buildings?  Bike squads would own the straightaways, until they are ambushed by Jump Troops hiding behind a choke point.  Artillery would pound the city from outside.  Xenos may skirt the edges of the city scape but will eventually have to make a play for the vital objectives at its center… and you can only Turbo Boost in a straight line!  Sure, your army composition may have to change.  Tried and true units may not be as effective.

There’s a paradigm we all need to acknowledge, then do away with.  It’s the idea of the “All-Comers List.”  It’s what we take to the game store on a *enter day here* to take on whomever is available.  For many, it’s just the latest step in practicing for whatever tournament happens to be around the corner, tweaking and tuning a list to perfection.

We spend so much time practicing the game instead of spending time playing it.  I hope that distinction isn’t lost on you.  If it is, you’re probably doing something right!

If you came up like me, the idea of ‘tailoring your army‘ for a particular opponent was considered bad form… …but can’t we finally acknowledge the game has changed?  There are match ups now which are not only bad but completely unfun to play against.  Here, ‘unfun’ means the opposite of ‘fun’ as in, “Why the hell am I playing this game again?”

Or:  “Did I really just drive up here to spend two hours acknowledging the superiority of CronAir or SeerStar or whatever net build happens to be popular?”

It’s time to take a page out of WarmaHordes and bring multiple lists.  Make two, see what your opponent has brought for the evening, and take the one that has a fighting chance.

Yeah, I just put that in bold.  I think it’s a simple way of bringing some control back to a quickly escaping meta without trying to put artificial limits on CADS and Allies and Formations and whatnot.

To me, this idea makes so much sense there’s no point drafting an argument to sell you.  Talk about it with your gaming group, see what everyone thinks. It doesn’t have to be my ideas, or any offered up in the comment’s section, below.  In my humble opinion, if getting the guys, gals, Unicorns, and children together to talk over some new ways of organizing Warhammer 40K games doesn’t lead to excitement and an infusion of new ideas…

…then you and yours might just be a bit over the hill.  Ask yourself then why’re you’re so afraid of change.

Yeah, I didn’t talk about Warhammer Fantasy.  Frankly, it might as well not even exist in my little corner of the world.  I’ll keep my Beastmen and Tomb Kings and hope for a miracle.  Who knows, maybe Nagash keeps that spell right at the front of his creepy book.

I’d love to hear some ideas about Fantasy.  Further, how could what’s could about other games inform the way we all play 40K?  Not that those other games aren’t freakin’ great, ’cause they are.  It’s a really great time to be a hobbyist… but that conversation is for another day.

Until next week, thoughts?  Comments?  Rock, paper, and scissors hugs and gropings?