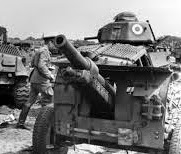 It’s a era I’ve only been playing in recent months and after a recent tournament have really enjoyed it compared to late/mid war. Here’s a few reasons why

The setting
It’s right at the start if the war, and this means two big things when I look at the game, the first is crazy vehicles. The various nations are experimenting with ideas so you get behemoths like soviet land battleships (t-35) to crazy little hotchkiss French tank. And it makes it interesting you get these odd units which were all rejected for a reason, but often have a place on the table. The second part of the setting is the truly global nature of the conflict, with books already covering Europe, Africa, Russia against Japan and Finland – and soon to cover Barbarossa – but this is the other interesting part you really do get a whole mix of nations and their special rules which you don’t see at other times – kiwis who can move an objective 12 inches was distinctly amusing. It’s a very different feel when you’re gaming in early war, you don’t have things which work well, or are good at only one thing. It’s a real refreshing break from late war. The Lists
This is the other thing which I like the lists which you see in early war. Up until the release of ‘rising sun’ the overriding concern for any army would be how to beat an army with either ‘Char B’ or ‘Matilda’ tanks – that’s because these tanks are all top armour 2 and front armour 6+, and with almost no integral infantry anti tank weapons (like bazookas and PIATs) infantry have no chance to hurt them in assault, and with most anti tank guns being 7/8 max – they are hard to hurt from shooting too! But the other concern now for players are the Fearless Veteran lists by Japan and Finland – both are hard to shift with limited but effective ways to deal with tanks! So what are the popular lists? Well looking at some events the most popular appears to be the German Leichte Panzerkompanie, you get a mix of panzer 1’s and 2’s plus a few 3’s for heavy tanks – perhaps backed up by some flak 88’s. This list is strong due to these veteran tanks, and lots of them, you’ve got about a dozen chassis on the table – infantry struggle against you and it’s only the heavy tanks you really need to worry about hurting with your Flak 88’s.
Other popular lists include the Finnish infantry lists (Jääkärikomppania for example) these are lots of veteran infantry with some hard AT4 pioneers and a smattering of anti tank weapons – I think they also are appealing as the same models can be used in every period! Alongside this the Finn’s and Japanese are hard armies to break, with huge platoons or lots of platoons they really need to be beaten by winning on objectives. I think they’re harder to master than the tank armies but when played well are a real pain to fight against.
And of course British lists backed up by Matilda’s – though I’m definitely not sold on my opponent who had 6 if them and three carriers for their army! Though this is not the fabled British Armoured Regiment which Battlefront nerfed. The British tanks are great vs other tanks, but their lack of HE rounds really hurts when fighting against infantry – the top armour two of the matilda makes up for this, but having a platoon of pioneers etc lying in wait will help against them due to the small platoon size. Well I hope this may have interested a few of you in this period, I’m fairly certain come the release of ‘Barbarossa’ later this year the ‘meta’ will change – but for now it’s a great setting to play in.