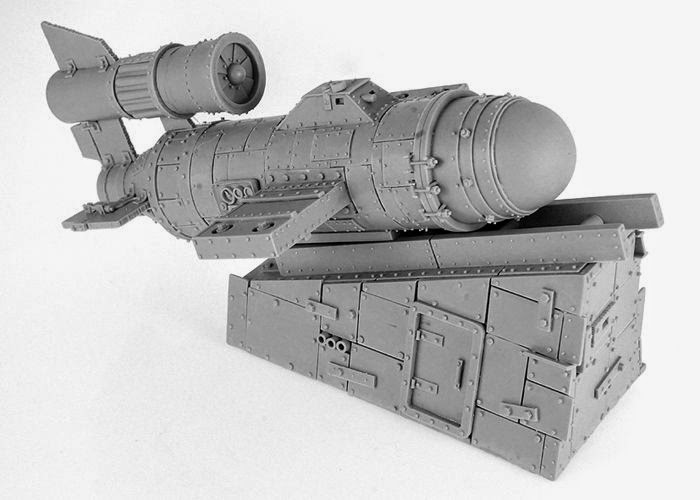 Today we look an oldie but a goodie – Maxmini’s Wunderrocket.  Let’s get started!

The Wunderrocket is one of Maxmini’s earlier releases.  As such I was not sure of the quality I woul be receiving.  However, this thing was near perfect.  The lines between the plating was crisp with out any resin seeping in to absure detail.  The model also fit together really well.  Wing and cockpit were a nice tight fit with next to no cleaning up.  The rear rocket need a little bit of trimming to fit but it was very minimal and took no time at all. As you can see from the picture this model has some great detail.  Once my favorite little details is the pad lock holding the cockpit shut.  My son kept asking me why there was a lock on it on the outside and I told him so the grot that’s piloting it can’t get out.  Ah, the life of a grot, short, brutal and with an exciting end usually. You can see the door into the lauch pad here with some other nice details.

There is actually an alternative cockpit as well that makes it look more like a regular missile rather than a grot piloted rocket. As you can see the rocket easily come off the launch pad.  My plan all along is to use it as a Pulsa Rokket in Apocalypse games of 40k.  The Pulsa Rokket has some great rules that are really orky in nature.  If I was rich I would buy another one and have one modeled as the rokket after it hits since the Pulsa Rokket remains in play.  It would be great to have a larger crater with bits of the rokket scattered about.  That’s something I will just have to convert myself though.

Yes, I know the Pulsa Rokket are no longer current or legal.  However, with a little tweaking it would not be hard to get it back in line with the rest of the game.  Apoc games are aimed at maximum fun so I don’t think it would be a stretch to have this included.  I know the guys I play with wouldn’t have a care in the world about me using it after we tweaked the points and rules to an agreeable point.

~ Heck, you could just use it as a grot-piloted Dakkajet with some good ole dakka bolted on!