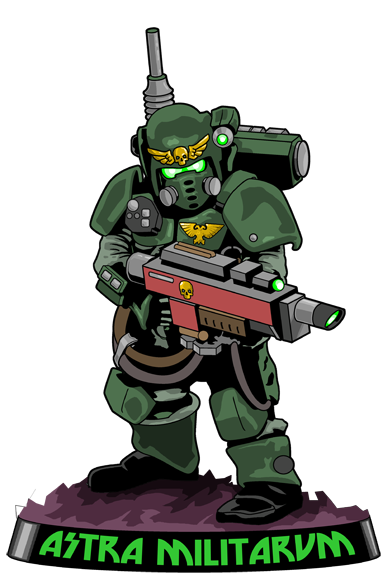 Greetings ladies and gentlemen, my name is Learn2Eel and today I will be reviewing the second core component and defining unit of Infantry Platoons, the Infantry Squad.

Before we begin though, I would like to direct you all to a sentence published on the third page of the Astra Militarum Codex in the introductory paragraph, specifically the second half of that sentence. It reads as follows; “but remember, victory in the Emperor’s name justifies any sacrifice, for a dutiful death is its own reward”. These brave men and women that fight to defend humanity from the threat of traitors and xenos die in their billions every day; attachment to each soldier is futile, for they grind out their victories through numbers and determination alone. With that in mind, I hope you find my advice useful and enjoy the article!

This is the second of five Infantry Platoon articles. Infantry Squad
Overview
Though these soldiers are definitely not the lowest class of warrior enlisted by the Imperium, they are nonetheless among its most numerous and ill equipped – it is the belief of their superiors that victory is worth any price, even the death of billions at a time. It is probable that more Guardsmen and Guardswomen die in one year than the sum of all living or dead Space Marines, a grim truth that highlights the cold brutality of sending countless souls to their end all in the name of a husk atop a throne of gold. How this translates to the tabletop war-game is predictable in that they are among the cheapest and most numerous units in the game with the highest potential unit size and unparalleled quantity of models through the platoon rules, outmatching even Orks and Tyranids for sheer numbers. It becomes quickly apparent though that your regular Guardsmen are not just mere pathetic fodder like many other cheap horde unit types but instead have a wide variety of upgrades, transport options and even become a deadly threat at medium range due to the incredible support abilities various characters in the codex can easily bestow upon them.

Fifty Guardsmen firing with just lasguns backed by the “First Rank Fire, Second Rank Fire” Order can potentially put out a ridiculous 140 Strength 3 shots at 12″, averaging 70 hits, 23 wounds against Space Marines and a further 8 casualties from failed armour saves (rounding down for all fractions) – cover and re-rolls need not apply! The basic profile of a Guardsman is less than inspiring but when multiplied between ten and fifty times over it will quickly come to surprise you with just how valuable it is, especially in light of a glaring lack of a certain wargear selection for armies like Chaos Daemons and Tyranids. Threes across the board with a decent Leadership 7, poor 5+ armour save and one attack per model mark them as the “human” archetype unit that various others such as Termagants and even the previous version of Eldar Guardians are based on. Each Guardsman has a lasgun, a pitiful Strength 3 AP- gun with a 24″ range and the Rapid Fire type that is near useless by itself but quickly becomes worrisome for elite or low Toughness units when used in great numbers – the doctrine of all Astra Militarum commanders is to win through bodies after all! Similarly, one Strength 3 attack per model is pretty poor but when fifty of those can fight with added re-rolls to hit from a friendly Ministorum Priest then that unit can quickly cut through even dedicated melee units just by soaking up so many wounds in each round of combat.

Attrition is the name of the game with Infantry Squads and they arguably do it better than anyone else, especially with a decent 5+ armour save and Toughness 3 on such a cheap model making them far better equipped than Ork Gretchin or Tyranid Termagant. This is especially true once you notice that even your basic Guardsman has frag grenades and thus will strike at Initiative when charging through cover, something even elite melee units like Genestealers or Screamers lack entirely. The Imperium has the best tools, no? If it wasn’t obvious already, an Infantry Squad comprises of only ten models and thus my earlier talk of fifty-strong squads might seem confusing; I am referring of course to the unique Combined Squads special rule exclusive to Infantry Squads. This is what distinguishes Infantry Squads from Veterans by allowing you to field an efficient horde unit that can be useful at both range and in combat unlike most horde units from other codices, packing heavy weapons and special weapons with easily obtained buffs among a literal storm of lasguns. That the decision to make a Combined Squad can be made before Warlord Traits are rolled rather than being restricted to the army list creation phase allows you to split a Combined Squad up if it would suit an objective-oriented game or allow you to better survive the limited but heavily concentrated firepower a list brings, such as from a Baneblade or Hellhammer. Ultimately though such occurrences are generally rare and there is usually little downside to making a Combined Squad as it is more difficult for opponents to take First Blood based on how much larger a unit is, and I would especially recommend keeping them together seeing as characters like Commissars and Ministorum Priests are limited and can’t be spread around too freely. It is a unit that takes and holds objectives like no other in the codex while still maintaining Objective Secured, providing firepower in almost frightening quantities that can be boosted to ridiculous levels through a combination of Orders and psychic blessings. However you decide to build this unit though – whether as a “blob” or as multiple smaller units – they mark themselves as one of the more points-efficient fodder units in the game and certainly embody the Astra Militarum fighting philosophy of drowning an opponent in bodies.

How to Equip Them
The good news here is that there is no single “right” way to equip Infantry Squads as all are the weapon options are very useful with a respective transport or forming up a combined unit. A unit in a Chimera can be given a flamer for clearing out objectives or a meltagun and krak grenades as a cheap light anti-tank unit. This also applies to a Valkyrie but it bears mentioning that you can use a static wall of Chimeras packed with Infantry Squads and use heavy weapon teams to provide a lot of cheap long ranged firepower protected by AV12 front armour. As for blobs, this really depends on whether you want your combined unit to be an objective holder or objective taker.

The former wants either autocannon or lascannon heavy weapon teams (autocannons without Prescience, lascannons with Prescience) and maybe a few plasma guns to be a huge and nasty unit when combined with Orders and relevant psychic blessings. The latter wants at least half the squad to take krak grenades so that it won’t be rendered useless by a wall of vehicles and from there either some meltaguns or flamers depending on which kind of shooting is less easily found elsewhere in your army list. This kind of unit also loves to have power weapons or power fists on its Sergeants to have lots of “challenge monkeys” for a more important attached character that can also “hide” from monstrous creatures or squads and smash them to bits. Vox Casters are a nice upgrade for any type of non-mechanized unit given their low Leadership 7, though arguably adding a Leadership 9 Commissar to a unit reduces the need for these. Best Uses
When it comes right down to it Veterans are a mere two handfuls of points more than a standard Guardsmen squad, packing an improved Ballistic Skill and numerous additional options such as being able to field up to three special weapons per unit. If you want squads packed into Chimeras or as lone squads of ten models then Veterans will be superior in almost any situation you can think of for the points, so playing to an Infantry Squad’s strengths is key to their success. This revolves around the Combined Squad rule as it allows your regular Guardsmen to perform a role Veterans cannot, and that is as a massive concentrated horde that minimizes the amount of character spread and support required as opposed to multiple units. Thirty to fifty models is my general barometer for an average Guardsmen blob seeing as twenty is negligible at best while the higher numbers will at least be able to survive some punishment.

A durable Objective Secured unit is hard to come by for the Astra Militarum and a Combined Squad is the only unit even remotely close to that if only through the sheer amount of wounds it packs in. While many players will often outfit such units with multiple heavy weapon teams and longer ranged special weapons to fit into a gunline build designed purely to annihilate enemies through its unrivaled quantity of firepower, I feel that mobile Objective Secured on a “survivable” platform is only accessible with a Combined Squad. For this reason you may want to skip on the Heavy Weapon Teams and prioritize flamers or meltaguns so that you don’t have to compromise on mobility, though I do feel that a huge squad of Conscripts are better in this type of role as they don’t waste the potential to take and protect Heavy Weapon Teams. If you do use a Combined Squad then make sure to attach at least one (Lord) Commissar or Ministorum Priest so that the unit is immune to Leadership manipulation and failing morale or pinning checks; a Combined Squad is also an optimal target for every single Order due to the number of models affected.

And that my friends brings us to the end of this long (sarcasm) and arduous journey trawling through these assorted ideas and ramblings. Whereas a Guardsman or Guardswoman’s life is short but not sweet, it is my sincere wish that every paragraph, sentence and word contributed to your development as an Astra Militarum player. If you have any suggestions or feedback for me then by all means leave a comment below and I will do my best to reply as soon as possible. Thank you all and I hope you have a lovely day!

NOVA Open is Done, and It Was a Lot of Fun!