The Nephilim Bloodseer – He Can See Your Blood! 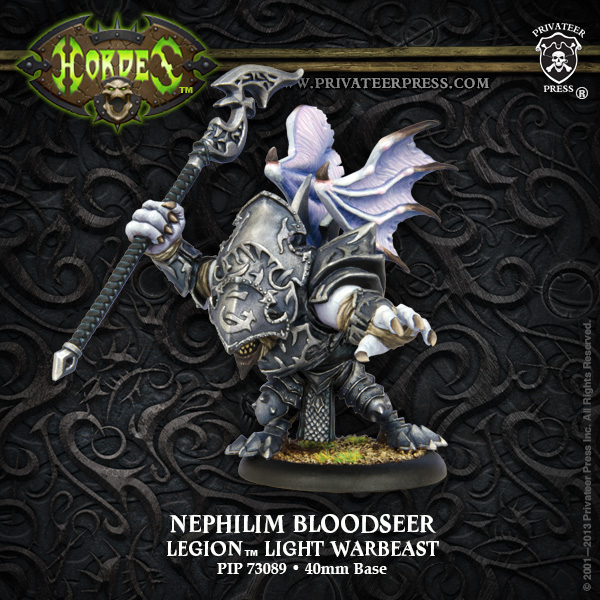 The Nephilim bloodseer is finally here.  While he has been waiting in the wings for quite some time now he can finally be fielded. Time to take a look!

Medium warbeasts have some niche rolls to fill.  They don’t hit hard enough to kill heavies and they don’t usually have enough boxes to tank infantry charges. Let us take a closer look at this winged creature.

First off the kit is pretty cool.  It is still legionesque with that draconic feel.  But, this guy is bulkier compared to the other nephalim in the medium beast category.   You really know what he is with that crazy helmet piece he is sporting.  Cool model that I hope to get painted up after my cephalyx are done.
Stats:
The bloodseer is a weird concoction of stats.  Average speed, below average mat, and high armor for a medium makes him tricky.   A rather decent target for tenacity or spiny grow can make him hard to take out from range.  A measly reach weapon will mostly be used to kill 1 wound infantry.  This guy is not going to be putting dents into a stormwall any time soon.
Animus:
Witch Blight is a self-targeted utility animus.  It increases the cost of spells cast within 5” of him.  You cannot upkeep spells within 5” of a witch blight model.   I like it.  It could make flashing blade casters pretty sad…<cough 3 butcher cough>.  If your opponent is slinging a bunch of upkeeps around; you could charge this guy into a juicy spot and make them recast or go without.   Damiano would not be too happy to recast death march and sure foot turn 3.
Abilities:
Here is really where you might consider clearing the points up in your list for this guy.  He is magic ranger with a new ability called telemetry!  Magic attack rolls get +2 while this model is within 5”.  Dream turn :  Bloodseer activates, animus, charges into range of 2 units with upkeeps on them, and your hex hunters can actually hit something above defense 10 pretty reliably.
Primal magic lets the bloodseer of friendly faction non character beasts within his command.  I originally missed the character restriction.  I was dreaming of belphagor death cloud with multiple bloodseers.  Alas tis not to be.  It still has its uses though.  Auto hit with harrier animus, put out another wraithbane from naga on that third ravagore, massacre from soldier, slaughterhouse to kill greygore or other annoying tough model, and the obvious tenacity.
Well he has wings so of course he has flight.
Warlocks and the Bloodseer:
-I don’t think either Abby gets much out of him.  I rather have a solider if I am taking any mediums with her.
-Bethayne would definitely benefit from Telemetry. Not having to boost the attack roll for burst eruption of spines is a big deal.
– Kallus is proably better off having more infantry for his feat.
– The Lylyths are interesting. All of the Lylths wouldn’t mind having more help handing out tenacity.  Lylth 2 could use him to hand out another wraithbane from the naga.  Lylth 3 could actually hit something from a blood booned frost hammer.
-Rhyas is like Lylyth, she could use assistance handing out tenacity.  If you are think for some left field stuff, with 2 blood seers and a solider you could hand out a bunch of massacres.  Combine that with the feat and your pumping a bunch of free attacks from even base 1 attack infantry on the charge.  Could easily get deep in the line with a some weapon masters.
– Saeryn doesn’t usually target the enemy except for a breath stealer here and there.  I think she could get more out of other beasts.
–  Thagrosh 1 I think can do some dirty things with the bloodseer. A spiny growth +death shrouded bloodseer is effectively Arm22 vs melee.  Telemetry could also mean you don’t have to boost mutagenesis giving an interesting assassination potential.  Thagrosh 2 probably wants more melee oriented beasts.
-Vayl2 is still only getting 2 boosted oblits and vayl 1 is probably casting incite so they don’t need the bloodseer that much.
-Hexhunters, blackfrost shard, and the Nyss sorceress all get better with the bloodseer in the list.  The sorceress spray goes up to magic 9 which is pretty darn good.  I would even be tempted to run 2 of her in a Bethayne list with a bloodseer. Overall the bloodseer is a tanky support piece at the end of the day.  It has a pretty neat toolbox that can definitely make it worth fielding.  While every warlock might not get a direct buff from the bloodseer, it can still be useful to any list taking magic wielding infantry.

Hey BOLS, do you see a bloodseer making it into your legion list? Do you like the sculpt? Please post your comments. I am going to Clash for a Cure on 9/12 and hope to see you there. If you want to troll my twitter it is @revenanttx

Author: Revenant
Revenant is a veteran tabletop wargamer with over 10 years of experience. His specialty is Privateer Press' Warmachine & Hordes gamesystem. He began writing for BoLS in 2009.
Advertisement
Legion of Everblight Tactics Warmachine-Hordes
Advertisement 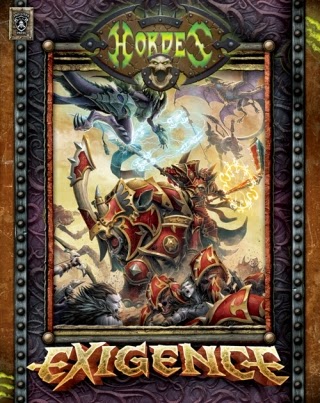