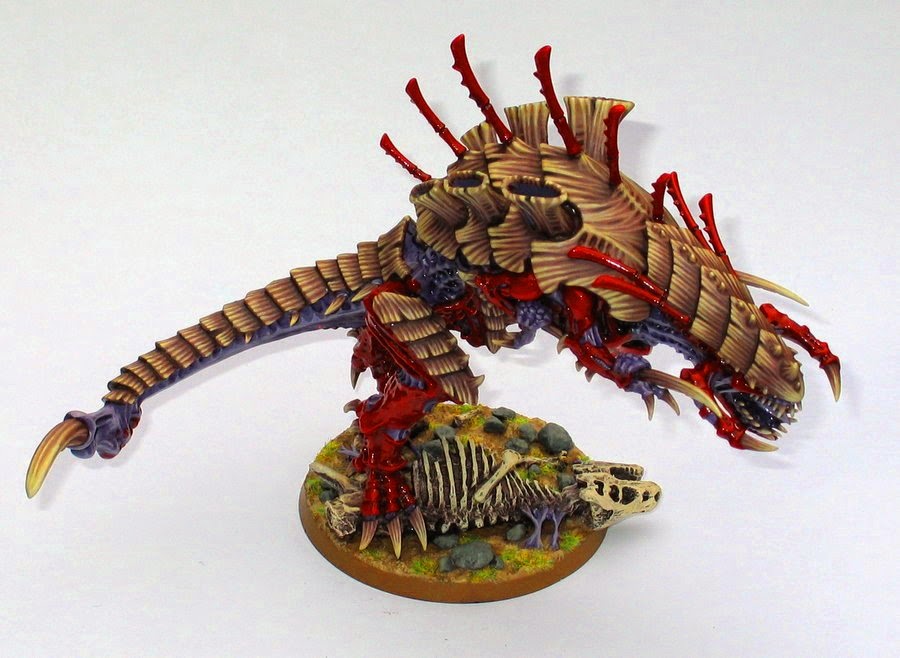 via an anonymous source

Toxicrene
Heavy Support, slight over 150pts
Acid blood, Lash whips, fearless, Instinctive behavior feed
On a large oval base with 10 long tentacles and a face like a lictor.
A 5 wound t6 monstrous creature who is hypertoxic and shrouded. this means any hit gains instant death on a wound roll of a 6 due to a toxic cloud. This includes its close combat attacks and its choking cloud
Choking Cloud; 12″ assault1 ignores cover, lg blast. Chocking cloud is S3, poisoned 2+ and against open topped vehicles or any vehicle that has lost a hull point the attack gains armour bane.
Maleceptor
Elite Choice: Monstrous Creature, slightly over 200pts
A 4 legged beast with two large scything talons
A psyker level 2, synapse monstrous creature that has an invul save of 5+. It has shadows of the warp and a 4+ save.
Psychic Overload: Warp Charge 2
It has the psychic power psychic overload, which is a 24″ focused witchfire. target must take a leadership test on 3d6 and vehicles count as leadership 10, failure causes d3 wounds no armor or cover saves allowed, and a causes a single glancing hit to vehicles, no cover save allowed. The maleceptor can do psychic overload three times a round, but cannot target the same model twice.

Compare the Maleceptor’s Psychic Overload to the old Spirit Leech ability of the Doom, and well there are a few similarities.

At the beginning of every Shooting phase, including the foe’s, every non-vehicle enemy unit within 6″ of the Doom of Malan’Tai must take a Leadership test on 3D6. If the test is failed the unit suffers a single wound for each point they failed by, with no armour saves allowed.

There are of course differences too, as one was basically a Zoeanthrope and one is reported to be a Monstrous Creature now. Psychic Overload also seems to conform more to the current rules set than Spirit Leech did upon it’s release. If you remember back a few years ago the Doom of Malan’tai’s Spirit Leech ability kicked off a heated “does Psychic powers affect embarked troops” debate that may have led to greater clarifications of how these powers work in subsequent rules editions (6th and 7th).

If Psychic Overload is a Focused Witchfire, we may see also some sniping of psychic models as Shadows of the Warp still lowers leadership to psykers and provides synergy with Psychic Overload.

Do you think we are seeing the renamed return of “The Doom”? -MBG