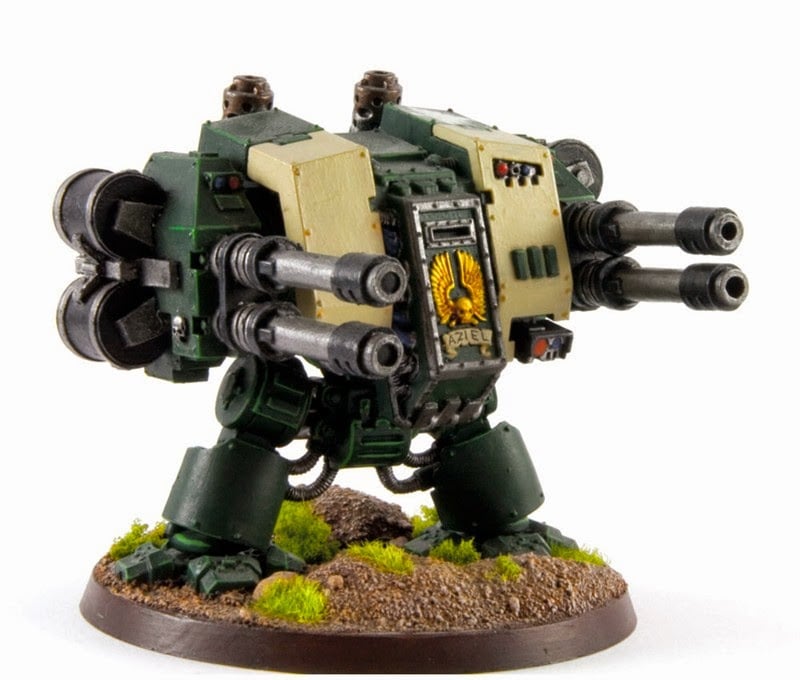 The Dark Angels are sitting on one of 7th Editions best kept secrets.  Come look at what the Mortis Dreadnought can do!

There’s an old unit with a new twist that’s flown under a lot of people’s radar and we wanted to take another look at it: the Mortis Pattern Dreadnaught. Check out the Tactics Corner for more great reviews and articles.

The Mortis Dreadnaught was originally a Dark Angels dread that came with two of the same weapons systems and specialized in long ranged firepower. This latest version of it comes with the same kit, but also has the very cool ability to gain Skyfire and Interceptor if it holds still, making it a viable AA option. Dark Angels can take as many of them as they have Elites slot in a detachment, and other Marines can take 1 of them per detachment. You can find the rules in IA2 Second Edition.
The nice thing about this Dread is that it isn’t hamstrung if you find yourself facing opponents that don’t have any flyers or skimmers as you would with a unit like a Quad Gun or Stalker. While the Stalker (or similar units) still have the ability to be used as mobile LoS blocking, tank shocking, etc. it really doesn’t do much in the way of contributing firepower. The Mortis Dread however, does. The downside though, is that if you get Immobilized you are stuck in Skyfire mode, but this is a pretty minor con. The other downside is that you have to predict where he will be needed. You need to put him in an exposed position to take advantage of his Skyfire and Interceptor. You can’t hide and wait, and then move into position. You have to hang ’em out there and hope you chose correctly.
And on that note, Dreadnaughts are notoriously easy to take out. AV12 in the current meta of massed high strength shots is like having tissue-paper for armor. They will drop like a fly to focused attention. Dual Missile Launchers
That said, the Mortis is cheap as chips. At 115 base with 2 missile launchers, that is a good set-up right out of the box, so to speak. This gives you respectable punch for dealing with flyers and FMCs, and also good tools for light infantry (Frags) and ground armor units at an incredibly cheap price point. Dual Heavy Bolters
For 5pts you can “upgrade” him to have 2 Twin Heavy Bolters, although I wouldn’t really consider this option, personally. It simply lacks the punch you need to deal with most flyers. If you face a lot of T5 FMCs like Crones or Daemon Princes, this is not a bad option, but in general terms I would pass on this. It does look pretty slick, though!
Dual Autocannons
Alternatively, you can go for 2, twin Auto-Cannons, for 10pts. This is a solid option as for only 5pts over a typical Rifleman Dread, you get a Mortis that can go Skyfire/Interceptor. The dual Auto Cannons are solid for AA, AI, and anti-light vehicle. This is a great choice. Dual Las-cannons
Lastly, for 30pts, you can rock 2, twin Las Cannons. Not bad! This gives you two, move and shoot, highly accurate, powerful weapons. While you lose that AI ability the other options give you, you get some really effective AA and AT punch. While this option costs almost as much as a Dev Squad with 4 Las Cannons, you make up for the lack of punch with accuracy, mobility and of course, AA power.
If you are playing DA, I would consider taking 3 as at the price point and utility, they are very solid. For non Dark Angels marines, taking 1 with dual Las Cannons really helps to fill the AA gap many lists have as it gives you a viable option for dealing with high armor flyers like Stormravens and FMCs, and it gives you great tools for taking down ground based armor units and MCs or heavy infantry with 2+ saves like Broadsides.
Lastly, I just love Dreadnaughts and like to find a way to field any of my 8!

Author: Reece Robbins
Reece Robbins, is one of the most respected names in tabletop gaming. He founded Frontline Gaming and the largest Warhammer 40K tournament in the world, the Las Vegas Open. Reece has been playing competitively and covering Warhammer since the 1980s. He has won major events including Adepticon.
Advertisement
Dark Angels Rules Space Marines Tactics Warhammer 40k
Advertisement 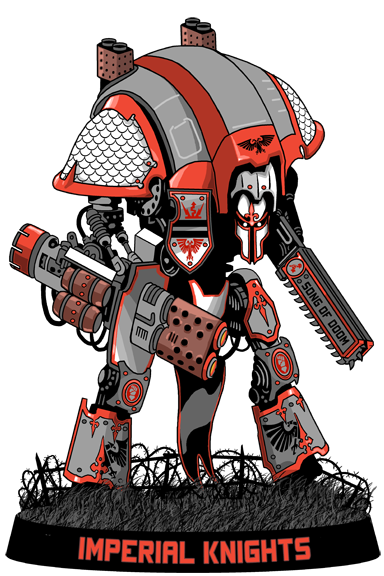