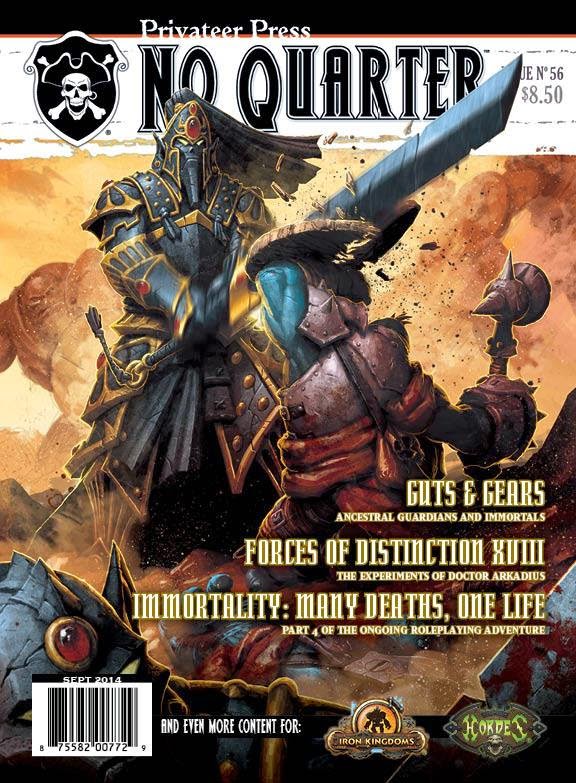 What does September’s No Quarter have in store for you? Here we go!

It’s 112 pages packed with goodness from the Iron Kingdoms. In this case I mean that kind of literally since there is a ton of content specifically for the IKRPG. While I’m not too much of a role-player myself, I can never get enough background reading for my favorite game settings.

The Gazeteer provides detailed descriptions of the Ordic town of Lhen. The Iron Kingdoms Archives gives a detailed timeline of the years 202 AR through 511 AR – the crucial years from the foundation of the major modern nations (Khador, Cygnar, Ord, etc.) to the first Thornwood War. Races and Cultures examines the Trollkin – both in their native Kriels and in the roles they play in the various nations of men. Monsternomicon gives you rules and background on the Duskwolf. Next, the multi-part Quick Shot Scenario: Immortality finally concludes with part 4. Scoundrels and Sell Swords gives you rules for the Mage Hunter Thalen Malvyss. Finally Career Counselling: Adventuring in the Motherland provides guidance for creating Manhunter and Kayazy Underboss characters in Iron Kingdoms campaigns.

While it’s not specifically for Iron Kingdoms, there’s even more background in the Gavyn Kyle files as he turns his microscope on the infamous Skarre Ravenmane. There’s more to read in Guts and Gears. This month’s installment goes into detail on the creation of the Skorne’s Ancestral Guardians and Immortals. As usual the segment also provides a cool hobby article: painting an alternate Immortal color scheme. That’s not the only hobby content for Skorne. Modelling and Painting gives you instructions on converting and painting some cool custom Skorne-themed Gatormen. Campaign Terrain: Windy Thorp gives you another cool tutorial, this time on making some Iron Kingdoms buildings.

If you’re interested in some tactical content, Tournament Triple Threat gives you three suggested lists for Protectorate with the usual breakdown of Assassination, Attrition, and control. There are two treats for Hordes players: an Exigence preview starring Absylonia2 – although Exigence is already out so you’ve probably already read about her in there. My favorite September treat though is the new theme list for Dr. Arkadius: Nature of the Beast.

The only models you’ll lose out on if you run this theme are Razorback Crew (probably won’t miss those) Maximus, and the new Efrit cavalry solo. But in their place, you get to take Goraxes! With Shield Guard! Primal will really let you dish out the hurt with those War Hogs, but I think Shield Guard is even more exciting. Arkadius has a history of getting shot to death – at least when I run him. And while Dr. A already had access to Shield Guard through Raluk Moorclaw and a Vanguard, that module will set you back 8 points. I think Gorax is the way to go.

For fans of other Privateer Press games there is a preview of the next High Command Expansion: Escalating Conflict. This is the first expansion for the new four High Command Warmachine factions and includes a tease of a new potential warjack: the Duelist in Highborn Covenant. If you already have No Quarter 56, you can find the missing images from the High Command Preview here. For Level 7 there is a cool little surprise: a timeline for the historical events of the game’s setting. It starts off in 1947 with Dr. Cronos’ arrival on earth and concludes in 2020 with the events of Level 7 Invasion.

~Thanks for reading. As always you can get more info about the latest No Quarter on the No Quarter Facebook Page.

Author: Ben Williams
Ben Willimans is a Professional Painter and Columnist at Bell of Lost Souls. He has been involved in the hobby and art side of miniatures and the tabletop gaming industry for over 20 years. He has won multiple national painting awards.
Advertisement
No Quarter Magazine Warmachine-Hordes
Advertisement