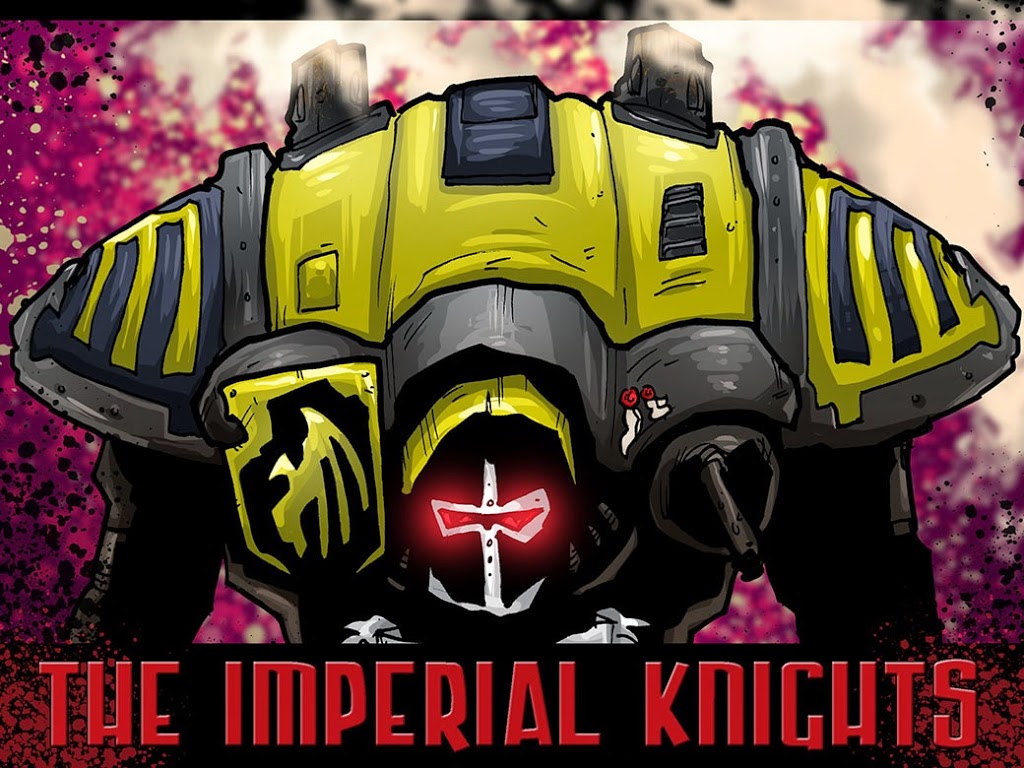 Hey guys, it’s Adam from TheDiceAbide.com back to finish what I started!  For my final article about Imperial Knights and their Battle Brother allies, I’m going to cover all of the Astartes.  Check out the Tactics Corner for more great articles!
Space Marines of various types are the most ubiquitous armies in the game, so the chances of you already having at least a few are probably pretty high.  As usual, I’m going to be talking about them from the standpoint of an army made up of at least 3 Imperial Knights, and a single other detachment.  I wont be talking a whole lot about Blood Angels however, because it seems quite likely that they’ll be getting a new book, but I will go over some amusing thoughts regarding the current one. Alright, first up, we have the sons of Sanguinius. In their current form, I don’t really see a whole lot that they offer, which standard Astartes do not.  Outflanking Baal Predators and Deep Striking land raiders are kinda cool, but really not huge. In terms of anti-air, the Blood Angels only offer the Storm Raven. For scoring though, if you’re wanting to do a Rhino based army, having a bunch of fast, objective secured transports isn’t bad, but I’d probably rather go with Astartes so that I could get infiltrating transports instead. Much like the Blood Angels, the Dark Angels are quite similar to regular Astartes, but have a few interesting differences. The first big difference is that their librarians have access to Divination, without having to resort to using an expensive special character.  As an allied detachment, they’re going to be very similar to Space Marines, probably involving some small tactical squads in drop pods, a librarian, and maybe a flyer. Something nice to consider is if you make Dark Angels your primary detachment, you can run a Ravenwing or Deathwing detachment. Ravenwing can support knights pretty well, giving you fast, stubborn, hit and run, scoring units, though it means you’ll have a very very small army.  Similarly, there are the Deathwing, though I prefer Grey Knights if I’m going for the turn 1 deep striking terminator allies.  Regarding anti-air, the only real option here is the Nephilim, which is by no means a bad flyer, with twin-linked lascannons, a twin-linked heavy bolter plus a few S6 missiles, it just comes in at about 30-40 points too expensive.

Chiming in at 17 models, this army basically just jams all the special weapons that it can in.  The meltaguns and multi-meltas will shred transports, while the command squad and knights can engage what comes out.  There is no AA to speak of, which could be problematic, though hopefully you’ll have the speed to avoid them as much as you can. The all-encompassing generic poster boys of the future, the Space Marines offer a very effective army to consider as allies for Imperial Knights.  As a Knight primary army, being focused on anti-air, anti-transport and scoring, means that drop pod marines are my first choice.  For 125 points you can get 5 marines in a drop pod with meltagun and combi-melta, 2-3 of those squads is going to give you a lot of objective secured drop pods, plus some vehicle busting melta guns.  HQ are hard to fill, outside of special characters, none are really that fantastic… I generally opt for a stripped down level 1 librarian, maybe with a combi-melta or auspex. If you decide to run with Ravenguard (or Raptor) Chapter Tactics, then a rhino/razorback spam list isn’t a bad option either, giving you an extra 12″ of scout move before the game to get into positions and near objectives.  Storm Talons are fantastic options, regardless of if your troops are in drop pods or rhinos, with assault cannons and skyhammer missiles they’re well equipped to engage air targets, as well as offer their assistance in killing enemy transports.

A very well balanced list, with 2 melta laden drop pods coming in turn 1, backed up by some good anti-air and anti-transport in the Storm Talons.  It doesn’t really have any glamorous or ultra-powerful units, but it has all the bases covered.  I’ve dropped the Castigator from this list, opting for an Acheron instead, as I’m fairly confident in the Storm Talon’s ability to help in the killing of transports, and there’s nothing better for mop up than an Acheron.

A bit different than the other list, instead of spreading out the melta, it’s all jammed into a single drop pod, and instead, is backed up by 30 scouts.  With the Raptors Chapter Tactics, you’ll want to get those scouts in position on an objective, then just sit back and fire rending bolters for the rest of the game.  Instead of one squad of scouts, you can run a unit of 3 Quad-heavy bolter rapiers instead, which is a pretty disgusting unit (drop the Apothecary upgrade, or a meltagun to get the points).  It’s also fun to note that the scouts can split up into units of 5 if that suits your fancy.

Another option to consider when playing with Space Marine allies is the Tyrannic War Veterans Detachment.  With the minimum investment of Chaplain Cassius and 4 Tyrannic War Veterans, you have enough points left over to get 4 Storm Talons that can start on the board and infiltrate.  I’m not sure what you’d do with Cassius and friends, but it’s something interesting to consider in the very least. Space Wolves are the chapter that first comes to mind when you think of a beat stick loyalist marine army. They have some of the same options as their Codex Astartes following comrades, but they also have some real vicious units like Thunder Wolves.  With the Company of the Great Wolf detachment, they’re also able to bring nothing but Elites to the board of they really want.  With respect to filling the gaps in an Imperial Knight army, they offer some very solid options, as well as some devastating units to augment where the Imperial Knights are already strong.

The idea here is very similar to the other marine lists, except it’s running a single powerful flyer instead of a pair of Storm Talons.  The Grey Hunters deep strike, hopefully taking out a transport or two, while the Stormwolf dominates the skies and assists in killing transports (with a twin-linked lascannon, 2 twin-linked multi-meltas and the S8 Ap1 shot from the Helfrost, that shouldn’t be hard).  Additionally, the Stormwolf is very effective at helping fight against enemy knights, putting on a few HP, or at the very least, commanding attention from the ion shield.

This is obviously a far less subtle army, and at 1850 with 10 models, the smallest army of any of my articles. The Thunderwolf mini-deathstar obviously handles plenty in combat, and if any of it lives until late game, it can split up into 4 units to claim multiple objectives.  The list has almost nothing to speak of for AA, just the Castigator hoping to make something jink, while the rest of the list closes in for the kill.  Definitely a list for win big or lose big.

What Astartes do you think work the best with Knights?

Author: Reece Robbins
Reece Robbins, is one of the most respected names in tabletop gaming. He founded Frontline Gaming and the largest Warhammer 40K tournament in the world, the Las Vegas Open. Reece has been playing competitively and covering Warhammer since the 1980s. He has won major events including Adepticon.
Advertisement
Armylists Space Marines Tactics Warhammer 40k
Advertisement