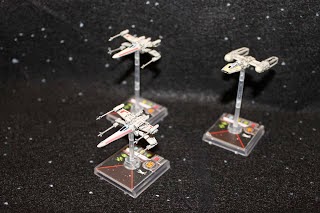 Does sportmanship even exist in X-Wing?  A recent incident has everyone asking questions.

While you may or may not be an X-Wing Miniatures Tournament player, it’s hard to deny that events like Nationals and Worlds shape the direction the game travels from it’s loftiest, most competitive perches to friendlies at your FLGS against your pals. At the recent Worlds event, some player tactics left some folks questioning the sportsmanship of a participant. What do I think about this business? Read on and find out!

So the actual events that lead to all the internet outrage over the weekend is kinda irrelevant. I mean, it’s sort of relevant, but really only as a reference point to introduce this article. Long story short, I don’t plan on recounting everything that happened in the match, I’m more interested in talking about the notion of sportsmanship in X-Wing as a whole.

See, the short version is a guy used/ exploited/ whatever the rules interaction about bumping ships together to create what’s known on the X-Wing circuit as a “fortress” basically to keep from moving for part of the game. This is legit from a rules standpoint, but a lot of people cried foul as a result.

As I can totally see both sides of this debate, I decided to debate myself on this issue. Point: Sportsmanship is… what exactly?
Look- first of all, I want to start by trying to define sportsmanship. This is tough to do, and that’s like my entire point. Lots of people can tell you what sportsmanship isn’t, but have a hard time actually telling you what it is, embodies, or entails.

Also, I want to make perfectly clear that I’m talking about sportsmanship in regard to the rules. Obviously I don’t condone people trying to bully one another, intimidate, threaten, belittle, or whatever during a match. To me, that’s something totally different than being a poor sport- it’s being a disrespectful turd.

That out of the way, I totally agree with the guy that fortressed up. He employed a tactic that’s within the rules of the game. I got no problem with that and I don’t really see what everyone is so up in arms about. It’s Worlds, people. The guy was playing to win. To me it’s no different than taking a Fat Han list even though you’d maybe rather play something else. It’s a competition, he’s competing. Where am I losing you? Counterpoint: Sportsmanship is playing the game as intended.
So just because it’s within the rules, it’s acceptable? That’s kinda ludicrous. And the fact that it’s Worlds shouldn’t really have any bearing in this discussion- it’s not like there’s a different ruleset in play for Worlds as normal store tournaments. The expectiation of the participants is to play a game of X-Wing against some really talented opponents, and that’s the definition I think you were looking for- sportsmanship is playing the game as it’s intended to be played and winning as a result of fair play, superior ability, and yeah, maybe even a little luck. X-Wing is about dogfighting, not creating a four car pileup so you can hide in your own corner of the board for 90 minutes. That’s an unintentional rules interaction being exploited.

Point: Rules Exploits?
How do you know the rules interaction was being exploited? There have been people trying to make fortresses work since Wave 2 and folks were worried about what it’d turn into way back then. FFG has done nothing to outlaw fortressing or bumping your own ships together, so it could be debated that they have no problem with it.

The point is this- the guy didn’t break the rules at any time during the match. He took a pretty big gamble and it paid off. It’s no different than fouling the guy with the ball to try and force possession turnover in the dying minutes of a basketball game.  It may not be what Abner Doubleday had in mind when he dreamed up basketball, but it’s a legit tactic that’s used at every level the game is played. Would you call that bad sportsmanship or just good clock management? Counterpoint: Broken rules do not a poor sport make.
Sportsmanship has nothing to do with playing inside the ruleset- if you don’t play within the rules, that’s not poor sportsmanship, it’s just cheating.

To me, it’s really pretty simple- play the game the way you’d like it to be played against. That’s sportsmanship in a nutshell. If you want to play the game to the very letter of the law, fine, but the reality is most people don’t like to play that way. Most people like to play these games so that it’s fun for both parties, and even if you lose it can still potentially be a good way to kill some time on a Saturday afternoon or whatever.

For me, it’s all about the experience. If we’re playing and you forget to declare an Action and you move on to your next ship, I’ll probably remind you assuming you’ve been a fun opponent throughout the match. If I end up winning that match, I don’t want there to be any excuses- just a fair win for me that we both walk away from having had a good time. Because that’s why I’m there- to have a good time. It’s not that I don’t care about winning or losing- I totally do. I’m just not going to let the result ruin the experience. Point: That is why you fail.
Again though- we’re not talking about the guy who is known as the voice of the beginning/ casual player. We’re talking about people who actually do want to compete and not have some campfire guitar circle hugfest experience. To wring every ounce of efficiency out of their list, utilize every strategy they’ve ever seen, and apply their hard-fought experience through hours and hours of games played in person and via VASSAL to try and beat the guy on the other side of the table.

Counterpoint: There’s room for both though!
So you made the basketball reference, let me make a sports reference.

Whether or not you think it’s the “best” league in the world, it’s hard to argue that the English Premier League isn’t near the top of the heap when it comes to competition. I started watching the Premier League back in 2008 and having only ever followed American sports (well, and hockey) up until then, I saw the strangest thing happen one match.

It’s been long enough ago (and it’s relatively common, so it’s not like it was a once-in-a-lifetime thing) I don’t remember who was playing, but a guy pulled up after a run with an injured hamstring. He went down in a heap on the field. The guy on the other team who had been racing the guy with the hammy, gained control of the ball, saw the other guy was injured, and kicked the ball out of bounds. This allowed the ref to call the medical folks out onto the field to tend to his injured opponent. Crazy, huh? Guy wins a footrace for the ball, then without even a moment’s hesitation, gives up possession because his opponent is injured. Here’s where it gets even crazier- his team got the ball back immediately from the other team. Like, they literally just passed them the ball once play resumed.

There’s totally room for sportsmanship even at the highest levels of competition. Call it “Fly Casual”, call it being a good opponent, a good loser, a good winner, whatever. You can be competitive without being a poor sport. It’s not easy when you have a built-in excuse of playing to win in a tournament environment, but it’s possible, obviously.

Point: Goal still stands.
That’s a heartwarming story about football/ soccer, but I saw the same thing happen once where a guy stole that inbound freebie pass and scored a goal which won the match for his side. He was vilified in the press, ostracized by his fellow players, and pounded by the pundits. Know what though? The goal still stands. The result didn’t change; the other team still lost. Counterpoint: Is it about the journey or the destination?
I guess it just boils down to what you want out of the activity of playing X-Wing. I mean, it’s super easy for me to say all of this stuff because I’m not, and likely will never be, a tournament X-Wing player. It’s sorta disingenuous for me to even talk about this topic because I’ve never been in the situation or anything even remotely close to it.

That said, I know me pretty well and while I can be competitive as the next guy, I remember a few times in the past when I was a kid playing sports that I cheated or benefitted from a no-call or whatever and the victory always felt hollow to me. So call it what you want, but for me it’s more about the journey than the destination. I’d rather win with no excuses or calls, no doubt. But if I have to pick between winning because of a blown call or exploiting a rules interaction in some weird way that seems to go against the spirit of the game, I’d rather lose. One of those things I’m going to lose some sleep over, the other I’m totally not.

Counterpoint: You should have played against me in hockey, sunshine. They didn’t call me the fourth Hanson for nothing.