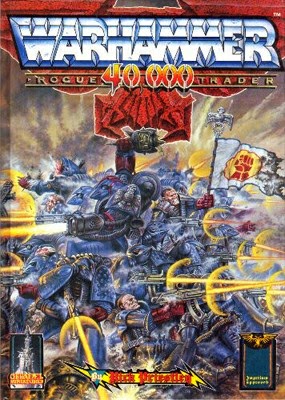 No rule is bad enough that it can’t endure two editions. Or four.

Wargames and their ruleset go through cycles. They  usually start out  just complex enough to get their basic theme (melee combat, tank battles, etc) going  in a  proper and enjoyable  manner. Then, if they are successful enough to make  it  into a new edition,  more rules and options start appearing and the thing compounds  itself.

Those  of  us who played  tabletop RPGs can relate. First we  had some six attributes to modify a dice roll that told you  if you  succeeded or failed at something. Then different  armor values against slashing, piercing or  impact  weapons, and a separate stat for pushing weights, dragging weights, lifting weights and a vector for your bonus/penalty when carrying said weights up an  incline  of specific angle.

When that gets heavy enough to turn off  newcomers  or bog down games, the great Simplification is at  hand. Whole chapters of rules are cut, things get condensed and made quicker and easier until the system is a sleek, mean machine  of solving stuff. And then that feels boring and flat for some, and the cycle begins again.

But even rules that are gone  or changed  keep affecting the game. Models that were amazing under the  old ruleset suddenly become awful or even completely  nonfunctional (Ork Kommandos from 5th to 6th, anyone?).  Unremarkable units suddenly become auto-includes because they were  priced  under  inferior rulesets that don’t reflect their  new abilities (Vendettas from 5th to 6th, again).

That can often be made at  least a  little bit better by frequent updates, revision, or wider releases across all armies/factions. When you have books from three edition shacking  under the same roof and/or lazy FAQs and Erratas…well, we’ve all been there.

Useless or Poorly Priced USRs and Gear
Let’s take a  look at  Fear. It’s a  great concept for a rule; entire board games and RPGs hinge on how  terrified you are while trying to save your hide.  That said, the current Fear rule is not only bad, but  badly designed. Over  half the armies in the game are straight-up immune to it, or so close as to make no difference.

Another respectable  chunk of those who are not  immune  couldn’t care  less  if they are affected: Tau Fire warriors and Eldar Guardians will shed no tears for needing a 5+ instead  of a 4+ to hit when your  melee specialists finally get to them. And even so, they’ll make the check more often than not. It will be a factor so rarely it  might not even exist.

And don’t get  me started about Soul Blaze. If there  is a  USR that only adds more rolls and empty book-keeping to the game for no actual benefit, this  is  it. If you add all the  models  killed  by Soul Blaze across the world since  the rule appeared into a pile,  I’ll bet you my imaginary 2-year-old  nephew can run over it on his  tricycle and not even feel a bump.

So we have an expensive rule/upgrade that rarely comes  into play, and even when it  does  offer  little benefit. Extra Armor is  roughly  in the same boat. It actually  has some  utility, but at  its  usual price  it’s still safer to just skip it, since few  bother to ‘shut down’ vehicles anymore; players who fail to blow up a tank will usually keep shooting  it  until it is glanced to death. The same goes for  Daemonic Possession (which is even more dangerously  useless on transports).

Solution: Give  it  teeth enough to matter or toss  it  out. Not every rule  needs to be game-changing, but they should at  least  be reliable about the benefit they  offer. Astartes  may know no fear and all that  jazz, but  even they can take a  moment to adjust after being attacked  by an unearthly/overwhelming enemy.

Fear could be a flat bonus to combat resolution against regular enemies and a simple -1 to Leadership against ATSKNF and fearless for a turn.  Or force successful Overwatch hits to be re-rolled against the unit as the defenders are too shaken to mount a  proper stand. Or  maybe even add an extra d6 to the Fall Back move a target does after  it  loses combat. Extra Armor could cancel the first Glancing Hit a vehicle takes and scale in price with the unit’s AV. Lack of  options  is not a  problem; 40k has more than enough depth to allow fun, fluffy effects.

As for  Soul Blaze…beats  me. Make it add +1S to the weapon when firing at targets  in cover, maybe, to reflect  it  setting stuff ablaze, or count as causing +1 wound for the  purpose  of checking Leadership when you are being shot at.

Charging  into Cover:
Even bad rules  often have good  justification.  Units can get defense from shooting by hunkering down in cover, so it figures that there would be an option to defend your guys from being easily charged and wiped.

The complication here  is twofold. First, cover in CC factors twice, against  only  once in shooting: you get a  shorter, possibly failing charge range AND have your  initiative tossed down to 1. One  of those effects can  be  mitigated (with assault grenades). The  other cannot.

Combined with other rules (or  lack of thereof), this  makes things…unrealistic, and stilted.  You’re telling  me that Murderfang gets bogged down when charging cultists because they are  leaning against a chest-high wall? It’s what he’s for! That the Avatar of Freakin’ Khaine has to hike  its skirts like a cartoon matron that  just saw a  mouse and tiptoe around rubble at Initiative 1 while necrons  laugh about what a sluggish bloke he is makes. No. Sense. So many units  lose their  whole raison d’etre over this: Incubi. Possessed. Warp Talons. Assault Dreads.

Solution: Divorce the whole things from the  presence  or absence  of grenades.  Offer choices. For example: Models that are assault specialists (name the rule whatever you want), Monstrous Creatures and Walkers get to ignore one  of the charging  into cover  penalties. They can either have their full charge range OR strike at  initiative. Or make  it a defender’s choice: you can force the enemy to strike at  lower Initiative, risk a shorter charge, or fire  overwatch.

Or, for a simpler but lamer fix, just let Move Through Cover serve as Assault Grenades

Weird, Static Conventions:
At some point  in time, a boardroom full of GW designers and table-crunchers gathered and the  word was passed from here to the  lowly writes toiling in the text mines: Daemon engines are all BS 3 and WS 3. Doesn’t  matter how  much they cost. Doesn’t  matter if they’ve been shooting since the Emperor had  pimples. Doesn’t  matter  if they don’t  have a gun and all they do it  chop dudes. Wanna  make a daemon engine? WS 3, BS 3, slap on a 5++ save and daemonic  possession, done.

Same thing for the  Heavy Bolter. Bit stores must wade through unsold  heavy bolter kits that come  in nearly every box and are  outshined by every  option under the sun. It’s Heavy, it fires a grand total of one shot  more than the  regular bolter at a slightly better strength, and all it costs  is not  moving your  unit or wasting a slot  on a relentless model for  it. Can it get a decent ROF? No. Maybe shoot different ammo (Say, S6 AP 6 shot for light anti-armor duty, and S3 AP3 bolts for threatening  power armor)? Nein. An overwatch bonus for point-defense ability? Nyet.This weapon has been like this when I was  an intern in this company, dammit, and  it will stay that way long after I am interred  in  my CEO sarcophagus!

The plasma  pistol goes here as well. Iconic, cool-looking, pricey as all get  out. And  no one  would ever  pick it  if  it didn’t come mandatory in a few  HQs. Bad range, pitiful ROF, no benefit  in  CC that a  laspistol doesn’t also offer, will kill your guy now and then. And  since the  model that  owns  it  is  meant to be in close combat, it’ll likely not get to fire  more than twice a game.

There  is a thing in design called space optimization. Basically, you only have so much  room in a release  to  toss out what your system does. Everything takes up space, and I’m not talking about just  physical space  on the  page, but in the  overall scheme  of what does what. When you fill it with lackluster, boring, nigh-unusable stuff, you are adding dead letter to your system, taking up real estate that could be  used for something fun that hooks  people. Might as well have put another picture, or left it  out and gone for a leaner, lighter selection of stuff.

In a  miniature game, ‘dead’ rules often have further investment sunk in them, in the form of actual models. It  only compounds the  issue.

Games Workshop is famously awful at this. Whenever  my friends go “Damn greedy GW, nerfing old power  units so the  new, broken models sell!”, I point them to the 6th Edition CSM book. Specifically, at the Warp Talons, Mutilators, Dark Apostle and Warpsmith. All new  models that  likely cost a fair  penny to design, assemble and ship. And  uniformly terrible.  Had they read their  own book, they’d likely  have given Plague Marine models a  reworking, as well as Chaos Lords on bikes, because those would sell like hotcakes, as  happened with the Helldrake. But the thing  is, they care too little to actually put effort into that particular gambit.

I guess we should be thankful, in a way. I’ll take a  lazy, aloof meth dealer who barely tolerates my  presence over a  Walter White savant who pours endless genius and charisma into converting  my  assets and spare kidneys into cash for Macragge Blue meth.

Solution: Mix it up. You  have the means to do this already. Release alternate stalines for exisiting  units in supplements  or  dataslates. Make different thing s different. Newsflash: someone  who buys a Pyrovore because you released a supplement  with “Xernian Pyrovores” that cost a bit more but actually do something? They make you  money too. Without you  having to pay storage  on the mountains of lame models clogging your warehouses or having to make  new stuff from the ground up.

Wouldn’t you guys at  GW like to sell some Mutilator  kits and recover that half  of your  parking space taken by piled-up models no one wants?

Release a wargear-only supplement with alternative, fun rules. We bought  all those Shadowrun books about future guns (An aside: You live forever in  my  heart, Ares Alpha combat gun!), and we didn’t even  have the toy plastic  men to use them with! Some day, there will be a book out there  letting  me tool up a Chaos Predator with Hades Autocannons, give Trueborn Kabalites  new and  fun poisons on their splinter weapons, crazy Ork gadgets that steal Warp Charges from the enemy and give them to the Waaaagh!. And  have Heavy Bolters and  Shotguns that actually offer attractive  options.

And then the effect of the Macragge Blue meth will fade, and boy won’t I feel silly.