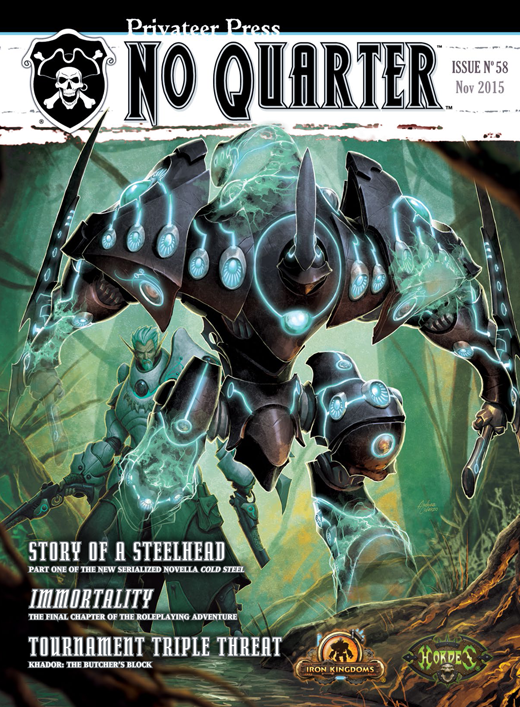 As with the last few issues, this one is great for Iron Kingdoms fanatics and everyone interested in Warmachine and Hordes lore. The bulk of the magazine is full of new RPG content and background reading.

For the usual installments there’s the Gavyn Kyle files, this time covering everyone’s favorite Thamarite warcaster Fiona The Black. While it’s technically an IK article, Iron Kingdoms Archive: Five Fingers has details on one of the setting’s most notorious cities that every fan of the universe should enjoy. There’s also something a little special: Cold Steel part one is the first installment of a full short story that will also be published through Skull Island Expeditions. It’s got Steelheads! Finally this issue’s Guts & Gears focuses on Mur – I mean Bog Trogs. Turns out they aren’t technically fish people they’re… well… Bog Trogs.

If it’s Hobby content you’re interested in, Guts & Gears has it’s usual alternate paint scheme article where you can learn how to paint some very cool Black Bog Ambushers. Additionally Rob Hawkins is back with three different conversions/paint schemes for you. This time it’s the Totem Hunter kitted out to go with Skorne, Legion, and Circle. This moth’s player Gallery doesn’t disappoint. The winner of Character Warjacks and Warbeasts has an Avatar of Menoth that’s just… well… you should probably see it for yourself.

As for all that IK content I was talking about, there are no less than five articles this month, one of which being the one Five Fingers one I already mentioned. The big news of course is Iron Kingdoms unleashed, and there are plenty of details in here about what makes this new version of the IKRPG unique and what you can expect to find in the Adventure Kit box. In Career Counselling you’ll learn what a career in the Temple Flameguard will mean to your IK character and in Scoundrels and Sellswords you’ll meet Ilena the Beast of the North. Finally, for those of you who have been running the Immortality Scenario, this month brings you part 6.

There’s plenty of content for Privateer Press’s other games too. There are some tips for Level 7 Invasion, as well as an excerpt from The Judas Protocol; another Skull Island Expeditions publication. There’s also info for the new Mercenary additions to Warmachine Tactics. For a lot of people the most interesting article might be for High Command. The card list for Ultimate Weapons features 4 new Epic Warcasters – one each for Ret, Convergence, Highborn, and Four Star. The big question is when we might see them in Warmachine.

That doesn’t leave much space for the Warmachine content does it? There are only two articles this month. The Reckoning Preview has a picture of the Devil’s Mutineers, as well as the rules for Garryth’s new buddy Moros. This character light warjack should really help Garryth get the job done. Expect a full article about it before too long. That just leaves Tournament Triple Threat, which makes a very good case for just running three different incarnations of The Butcher when you bring Khador to Masters.

~ Hope you enjoyed the article!