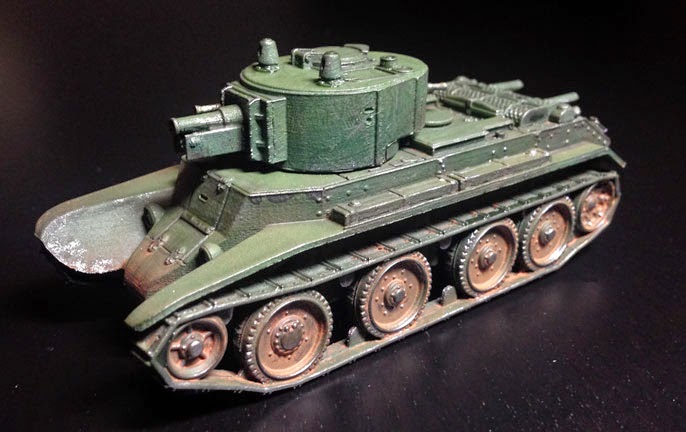 This is a review for the Trenchworx Soviet BT-7A  1/56th scale resin tank.  Get in here you WW2 hobbyists!

Trenchworx creates scale models for table top gaming, with the intent to manufacture in 3d printing, and eventually cast in resin. The BT-7A kit comes with the resin tank kit, instructions, magnets (for the turret), and some extra machine gun pieces (all contents pictured below).

Overall I found the casting quality to be excellent, the details were sharp, and there was obviously a lot of love given to accurately modeling the tank and its features. The inclusion of extra machine guns proved to be a good idea as well, as it didn’t take long to snap the barrel off of one while trying to assemble it into the tank’s turret.

There were a few surfaces that had some remnants of the striations that you get with 3d printing; but for the most part they did not warrant repair, or had been sanded away prior to the master mould being created. The only other problem I encountered was that the plugs that formed the forward and aft turret machine guns were too thick to slot into the turret and required me carving them down to make them fit (my initial efforts to push it in without significantly widening the port resulted in the break I mentioned before).

The assembled BT-7A, an excellent reproduction.

Aside from those minor complaints the kit is high quality and came together easily, cleaning the flash and heating the thin parts (such as the tracks) to make them fit is to be expected for a resin kit such as this one. From what I’ve seen of the three kits we received, the quality has been consistently good.

The BT-7 is an interesting design, I found this cut away image that explains the locations of a lot of the tank’s features.

It’s often mentioned, but bears repeating; every unit, vehicle, and piece of equipment from WWII has a rich history waiting to be explored. The history of these conflicts eclipses the most fanciful fiction writing. I won’t post the entirety of what I learned about this tank here, but let’s take a quick look at how the BT-7A came to be:

The turret with magnet installed. It fit perfectly with no modeling required.

In the 1920’s the soviets looking to modernize their tanks, held a competition looking to develop a new tank that focused on speed, while still carrying comparable armor and armaments to other tanks of the era. Enter an American (J. Walter Christie), an inventor who had developed a new suspension system utilizing torsion bars that provided superior handling at high speeds for a new “Christie” tank the M1931. Christie who had attempted to sell his tank to the US army without success, saw his opportunity and smuggled two prototypes (sans turret and weapons) into Russia with falsified papers claiming that they were farming tractors and not tanks. The Russians liked what they saw in the trials and they began to reengineer the tank  as the BT: “Bystrochodnij Tankov” or ‘fast tank’.

The BT series advanced over the years to the mark 7, and the chassis of the BT was well suited to variations such as the BT-7A close support artillery tank (the subject of this review). The BT-7 saw the majority of it’s fighting with the Soviet invasion of Poland.

However the tank was never intended to fight against medium or heavy tanks, and the new german tanks of 1941 with thicker armor rendered the BT tanks useless for anything except for fast recon.

The remaining BT-7’s that were not destroyed in battle fell out of service due to logistics.

There is one last notable thing about the BT-7, and that is there seems to be an inordinate amount of imagery involving flying BT-7’s on any image search I did. The ‘fast tank’ 7 was light, weighing in at under 13.5 tons and had a V12 diesel engine outputting 450hp allowing it to reach speeds of over 35mph, and while I couldn’t confirm the event pictured in the below photo on my quick research, let’s just say that I really, *really* want it to be true.

If you’re interested in Trenchworx and their tanks, there’s a Kickstarter running now: The tanks in Manchuria Kickstarter.  You have a chance to get the BT-7A and other tanks that served in that theater at a reduced price, the Kickstarter runs until May 14th, is already funded, and it’s their second successful Kickstarter.