Infinity: Fusiliers vs. Bolts in the Neoterra Sectorial 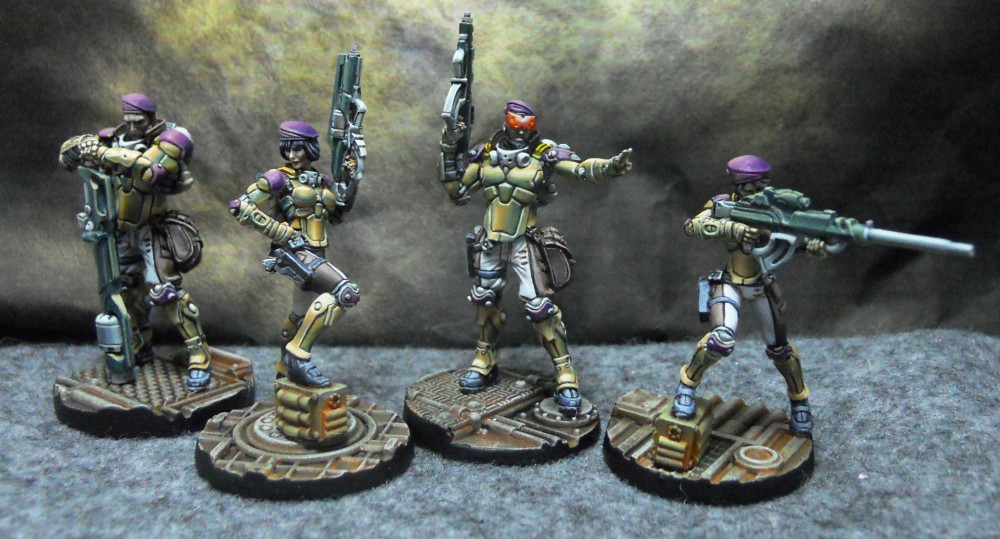 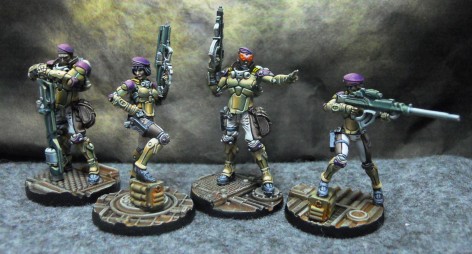 I’m back to talk more about Neoterra in Infinity. Today I’m examining the merits of their two Fireteam options: the cheap Fusiliers and the more Elite Bolts. 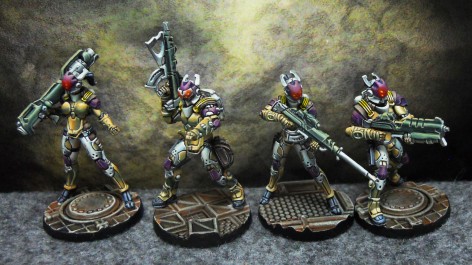 When you can only take one Fireteam, how do you decide which is the best?

In Infinity the answer isn’t quite as simple as it might be in other systems. Because of the way Combat Groups work, you have to think carefully about the number of models you field. Take more than 10 models and you have to start a second combat group which might deprive some models of all the orders they want. Fewer and you’re losing out on orders. In PanO I have yet to plan a list with more than 10 models (not counting Servants). Putting together a list with exactly 10 models, no more than 300 points, and no more than 6 SWC (Support Weapon Cost) can be kind of a tricky puzzle – even with multiple army generators available on line. Depending on what some of your other model selections are, you may find that Fusiliers are too cheap to get you to your goal. Other times, Bolts might take you over your points limit. 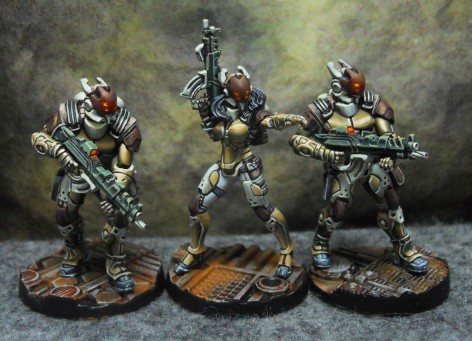 For example, when I was trying to plan my first Squalo list, Bolts just kept ending up being the right choice.

As expensive as the Squalo is, Fusiliers were too cheap to fill out the list the rest of the way. I guess I could have gone for the Fusiliers and also brought along a high point low SWC model like a Multi Rifle Aquila or Swiss Guard (no model for the second one yet but the Orc from Icestorm makes a good proxy) but lets look at another reason why Bolts are good here. 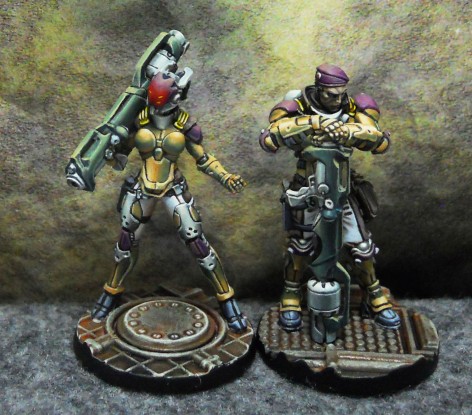 I’ve made my Squalo my LT, because greedy guy that I am, I want to use as many orders as possible on this behemoth. Since he’s already so dangerous, making him my LT will bring even more heat. Even with ARM 8, I might end up losing him. If he goes down, I’ll still get to keep 6 Regular orders in my pool thanks to the Bolt’s Veteran ability. That’s doubly important for Fireteams since if you use an Irregular order on one the link breaks. 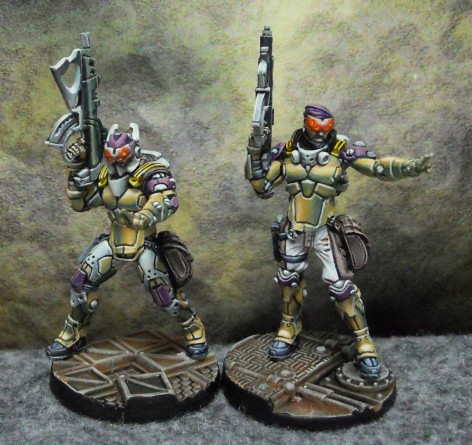 The Hacker isn’t in the link team since they max out at five models and the bonuses do the least for him. That +3 to Willpower is only for Discovery Rolls. Besides he’s mostly there for defensive hacking so he might need to follow the Squalo around depending on where the Fusilier and his Deployable Repeaters end up. 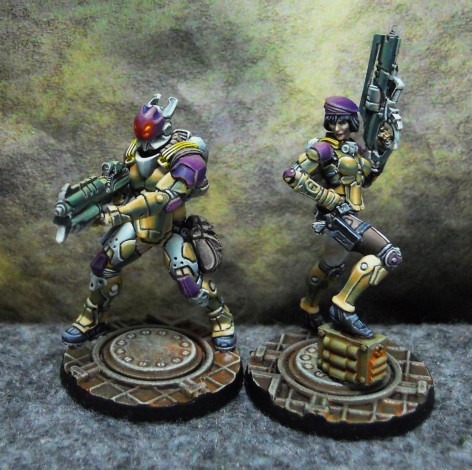 If you do end up losing the Squalo, it might be worth breaking the Spitfire off so he can hunt up close where his weapon is more useful, while Ms. Missile Launcher stays in the back with a better view of the battlefield and more importantly, in her preferred range band. You’ll have to decide which is the best choice – could be he’s better off staying put and going into suppressive fire mode. 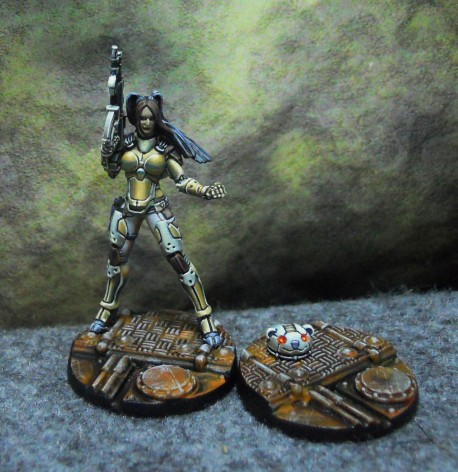 Since I’m going with the Drop Bear Bolts, I can deploy these nasty mines to give my opponent second thoughts should they try to come kill off my “cheerleaders” and deny me orders. In addition to the extra burst the link team gives you for ARO these guys can create a dangerous area to try to clear out. Plus Bolts are harder to kill since they have better ARM and BS than the Fusiliers – although the difference is slight. 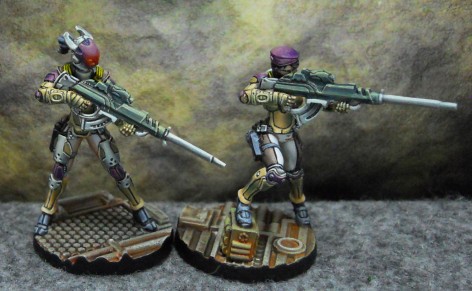 This list is sure to give people fits. Two Swiss Guard, and an Aquila? That’s just mean. Of course those guys don’t come cheap so this time I’m taking the cheaper Fusiliers for the link team. This list can potentially dish out three BS 15 ML AROs everytime anyone moves. I’ve also brought a pretty nasty hacker to go with the Deployable Repeaters the FO (Forward Observer) Fusiliers in the list are carrying. 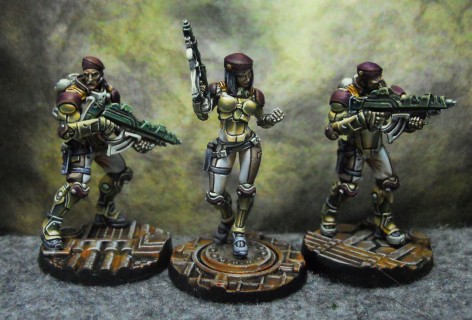 Whether it’s Drop Bears or those Deployable Repeaters I was just talking about, both options have have their own sets of tools to bring to the battlefield. As you may have noticed in my first list, there are often good reasons to bring just one Fusilier even if you have a Fireteam of Bolts, and the reverse can also be true of course. And if any of you are still trying to figure out just how the heck Fireteams work there is a good thread in the Infinity rules forums you should definitely read.

~Hope you enjoyed the article! I’ll take any criticism you have regarding my lists. Even with the more limited Neoterra sectorial selection there are still a ton of models. It’s easy to miss some. Of course I don’t own them all yet either (looking at you Auxilia).