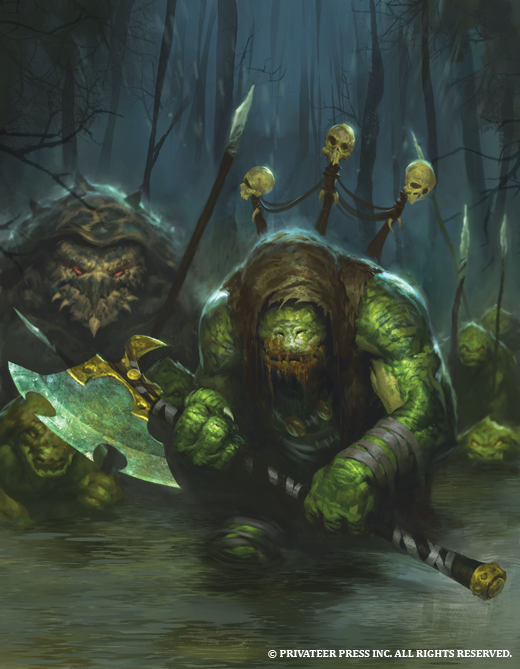 Today we delve into the masters of dominating the beasts around them in the wilds of Immoren – the harnessers.
Take it away Privateer:

The Iron Kingdoms Unleashed Adventure Kit introduces the harnesser arcane tradition through the nefarious (and probably mentally unhinged) Warlord Morrg. The ability to command his two warbeasts gives Morrg the authority he needs to keep his warband of farrow in line—and that ability is entirely thanks to the harnesser tradition.

Players familiar with the fury mechanics in HORDES will be right at home with harnessers. The risk management of generating fury and chancing frenzy is core to how the harnesser’s magic functions. Warbeasts bonded to a warlock can be forced to perform power attacks, swing more accurately, and hit harder. Forcing a warbeast causes it to produce fury points. A warlock, well, harnesses those fury points to power his spells, heal wounds, and increase his effectiveness in combat. Warlocks need to keep a close eye on their warbeasts, because fury points left on a warbeast can cause it to frenzy and lash out violently at the nearest thing it can get its claws on. There are a few differences between the HORDES version of these rules and the harnessers in Iron Kingdoms Unleashed, however.

In Unleashed warbeasts don’t only receive fury points on the battlefield; a warbeast can become enraged if it is injured, mistreated, or even just plain hungry. The list of conditions that cause a warbeast to gain fury outside of combat is ultimately up to the Game Master’s discretion, but every warlock must live with the constant danger that a warbeast will fly into unchecked madness and start tearing apart those unfortunate enough to be near.

When he’s not making sure his warbeasts don’t rip apart the entire village, a harnesser wants to spend some time empowering his own magical weapon. Unlike a character with the Warcaster career, which uses the Bond runeplates ability, a harnesser can boost his attack and damage rolls or purchase attacks with any non-mechanikal magical weapon. Warlocks have the Empower Weapon ability to allow them to make their favorite melee weapons magical. (Warlord Morrg’s Blunderbuss-axe has an axe on the end for that exact reason.) And if a warlock happens to come across some other magical weapon in his journeys—say, a wicked sword that was forged by ancient and unknown powers—well, things could get particularly interesting.*

*. . . I just checked. Alexia’s not interested in giving it away. Who’s in for some Iron Kingdoms Role-playing? Look for our Unleashed: Core Rules review coming soon!