So much gnashing of teeth over those Wraithknights and D-Weps.  You might be barking up the wrong tree…Guardian Jetbikes are the kick in the teeth you won’t see coming!

As I look through the new Eldar dex, there are so many changes that have made the Space Elves even stronger.  The Farseer was already a strong HQ;  it is even better.  Warp Spiders being able to “move out of the way” before you shoot at them.  Swooping Hawks being able to attack flyers.  On and on the list goes.  What struck me above all else though, even above the “dreaded” Wraithknight, is the Guardian Jetbikes.  I can’t think of a unit that, for a very reasonable cost, can put out this much firepower.  Move over Wave Serpents; let’s take a closer look at a unit that may (call hyperbole if you wish) change the meta. 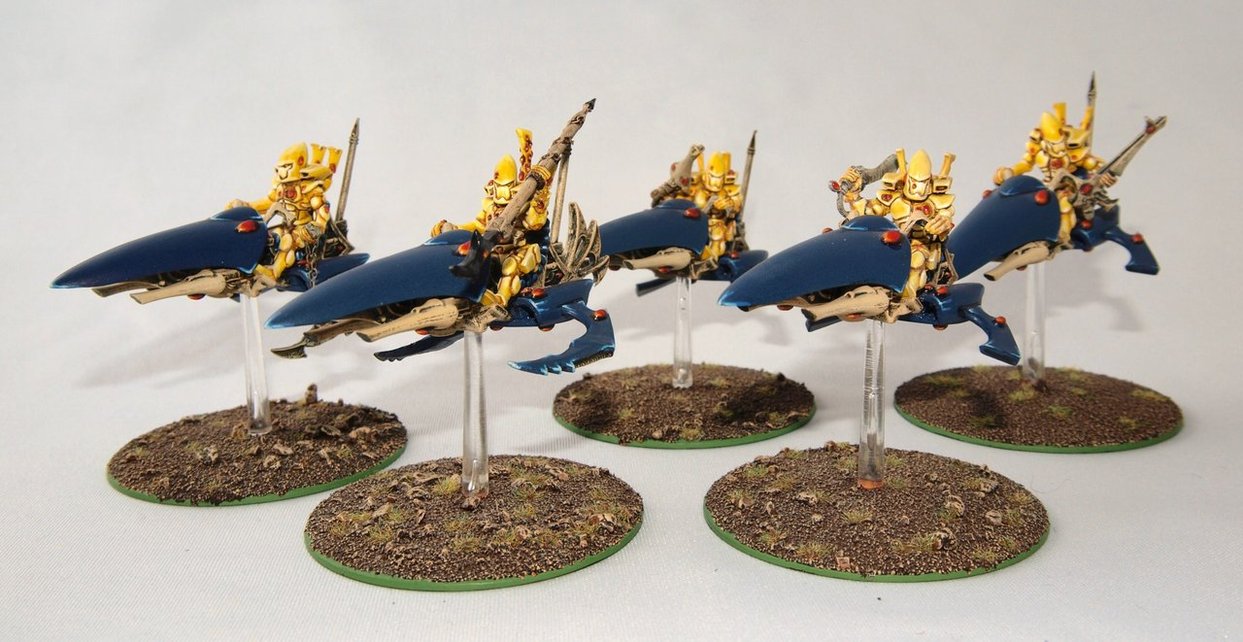 First off, we are talking a Guardian unit…Jetbikes that are troops, no longer fast attack.  Does Objective Secured come to mind?  At 27pts a model with a Shuriken Cannon (I think that’s right), you can get five of these for 135pts.  This works out to eight units of five each coming in at just over 1050.  In a 1850 list, that still leaves 800pts!!!  In this dex, that is plenty of junk to back up 40 Jetbikes that frankly, don’t need no stinkin’ backup!  MSU anyone?  Plenty of points for a few Farseers, some Warp Spiders, Wraithguard, etc. etc.   Because they are Jetbikes, this also gives them Jink, Ignore Cover and Turbo.  With a 3+ save.  Throw in a Farseer for 50pts, and you add a 4++ save to absorb some of the big incoming.  Of few of those psykers might be rolling up some Conceal for added fun. 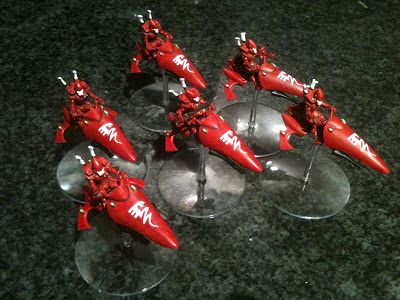 Editor’s note: Original incorrect math has been corrected in red.  Our sincere apologies…

Now let’s talk the killer.  Assuming you kit these out with Shuriken Cannons, that’s 3 x S6/AP4 shots at BS4.  Oh yeah, and Rending.  With a range of 24” and a 12″ move and shoot, that pretty much puts everything on the board inside the target reticle.  Now for the scary part.  Forty of these things are putting out        120  x S6 shots a turn!  80 of these will hit.  Against T4 models, that is 66 wounds; 13 of those are Rending.  9 dead Terminators just from the Rending, and you can add another 9 or so from the remaining shots.  Against normal MEQ, we are talking 13 dead from Rending and another 18 or so onto that.            18 Terminators or 31 Marines!  That is insane…for just a single turn of shooting!  Sure, there is cover or FNP once in a while.  But at 5+, that leaves around 20 dead Marines (sorry Death Guard!).   Note: I am doing all this with head math, feel free to correct as you wish. 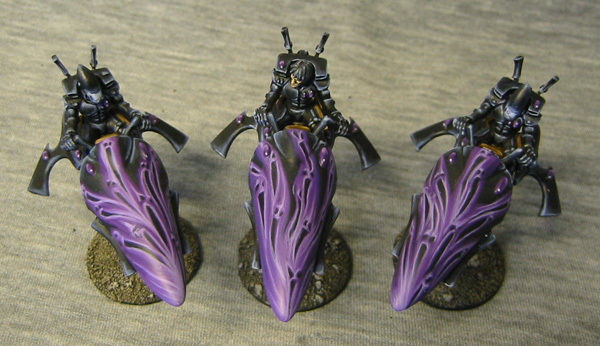 How about those vehicles?  There is no Rending here, and obviously those Shurikens aren’t going to do anything about armour 13+.  However, you do have another 800 points for some Fire Dragons in transports, War Walkers/Lords with Lances or maybe a D-Wep or two to deal with heavily armoured targets.  Also, with so many Jetbikes on the board and with their inherent speed, it will be difficult for opponents to position their vehicles to avoid those eventual side/rear shots.

Wave Serpent spam may be a thing of the past, but you can bet there will be waves of Guardian Jetbikes to take their place!

Ready to open that wallet for some Jetbike madness?