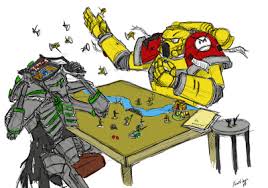 How’s THAT for realism?!

Pimpcron explores the third and final part of his rules changes that might make this game more realistic.

Hello all! Your helpful internet neighbor Pimpcron is here to discuss the realism behind our rules. For the most part, I am okay with the rules of 40k. I have seen other games with pretty clever rule sets, but overall this game suits me fine. But here I am, on part 3 of wish listing how they could change the rules. Just goes to show, you can’t please everybody. And even when you do, they will still whine in their blog entry about it anyway.

My Marine’s Missile Launcher is literally touching the side of a tank, but I still only have a 66% chance to hit it? It’s starting to make me think that Imperium Missiles are also made from that crappy grenade-making world. Maybe they are just faulty 33% of the time? Anyway, I think it would be cool to get a +1BS if you are within 12” of a target and -1BS if you try to shoot outside of your weapons printed range. I play a few other games that do that and it feels more natural.

Now from a game design standpoint, I fully understand why they only let us choose the best save each time and not use a Cover save, Armor save and Invulnerable save each time we’re shot. Nobody would ever die! You think this game is long now? Wait until your opponent’s Paladin squad gets a 5+ Cover save, 2+ Armor Save, 5+ Invulnerable save, then a 5+ Feel No pain? But it still stands to reason that we *should* be able to take all of our saves and not just one, or at least a cover save then armor save.

Okay, this may be secretly related to my love for Genestealers and the sadness revolving around their impotence in this edition. I was reading the Pulp Alley Rulebook the other day and they allow models to take Dodge rolls, and if successful they actually move a couple inches. I think that’s a great idea! I understand that Genestealers have organic armor and may only give a 5+, but at Initiaive 6 I would think they might be able to dodge stuff, kind of like a jink (Dark Eldar Wyche players are probably saying “Why does my Dodge only work in close combat?!). I say, models may take a Dodge save instead or other saves but may not be able to shoot the following turn. Their Dodge save would be determined by their Initiative stat. So Initiative 1-3 gets a 6+, 4-5 get a 5+ and 6 or higher gets a 4+. But not against blast weapons or flamer weapons. It seems to me that they would be too hard to dodge.

I know that the generic movement of units in 40k is just for simplicity’s sake. But these are literally different species from across the galaxy, and they already have different Initiatives. I don’t see why they can’t have different move ranges like in other games. I think that really helps differentiate between the armies and if you did it army-wide, it wouldn’t require anymore upkeep them usual. For example, all Eldar, Dark Eldar and Daemons move 7” while Necrons move 5”. All other races are still at 6”. Or something.

The weapon nobody wants to pick up.

When we took wounds from the back of the unit in 5th edition, I always assumed that it was because the Heavy Weapons guy actually did die, but someone else just picked up his weapon. It would make sense, all armies cross-train their soldiers in different weapons. GW tried to make wound allocation a little more “realistic” by making you take it from whoever is closest to the shooter. But in another way, it’s now less realistic because nobody has been cross-trained in weapons. I guess you just can’t win sometimes. I would suggest Special weapons people also get a “Look Out Sir!” to try to save the weapon. If the “Look Out Sir!” fails, then the weapon was destroyed in the process.

Blast Weapons Kill Whoever They Hit

I am actually on the fence on this one. I see the one side where it feels like the purpose of scatter is to see who actually gets hit by the blast. But on the other hand, unless the weapon is Barrage, the tank is shooting into the front of the unit, not arcing up and straight down. But I don’t see why you couldn’t target the Sargent of a squad with a blast and try to take him out. It almost seems that they were going to go this route when they invented “Look Out Sir!”s and then backed off. I say, you can try to kill him, but someone might jump in front of him to save him.

I know that some of these would drastically change the game, and most of the questions I have asked are rhetorical. Some of these are easy to see why they don’t implement them with the current rules. But it really comes down to what you want out of the game and how much you are willing to sacrifice to speed it up.
So what are your thoughts on these rules? Like them? Hate them?
What are your House Rules you have implemented?