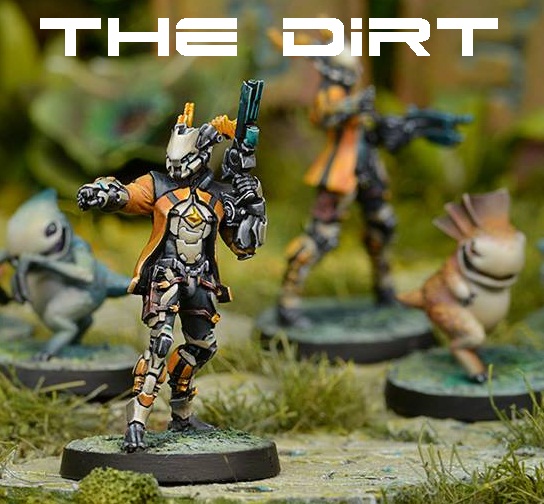 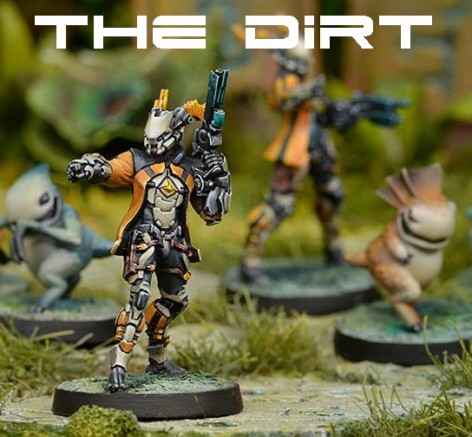 If you are a Tohaa player, you have a new, MUST HAVE unit to bring with you.  Enter the Tohaa Kaeltar.

May 21st, Corvus Belli posted a notice in their Twitter feed to let everyone know that the new Tohaa Kaeltar rules were available for download on the main site.  Also, Corvus Belli added the Kaeltar profile to the Infinity Army software.  If you did not read any of that yet, let me show you what you missed.

We’ll get to that new “Corahtar Disipline” special skill later on.  First, take a look at the general stat line.  For a model with a chain of command attribute and a higher than average Tohaa Willpower score, that alone could be an objective robber right there.  The BS/PH/ARM are fairly standard, but they also have a BTS of 3.  Not too shabby.  And an availability of 2?  I could have 2 Tohaa Chain of Command models?  Maybe for objective heavy matches, but with annihilation, you might want to take a non-chain of command version so you can also have both the SymbioMates AND SymbioBombs.  What are these Symbio-things?  They are single use pieces of gear that are assigned during deployment to Tohaa models with symbiant armor.  Notice something strange about the Kaeltar?  They don’t have symbiant armor, so these pieces of gear cannot actually be assigned to themselves.

And now we return to the new special skill, Corahtar Discipline.  From a fluff perspective, the Tohaa with this skill can use pheromone technology to control others.  Only the militaristic nature of these pheromones are detectable by humans, but in Tohaa society, there is a civilian application for this discipline.  In game terms, it allows the Kaeltar, during deployment, to assign SymbioMates and SymbioBombs to other Tohaa models that have symbiant armor.  Models with symbiant armor can have at max 1 SymbioMate and 1 SymbioBomb attached base to base.

Before we dive into what they do…. one thing is important to note, if the model with Symbiomates or Symbiobombs loses their symbiant armor (their symbiant armor is no longer in an active state), the SymbioMate or SymbioBomb is removed from the game.  Also, since it’s required that the Symbio-things be deployed during deployment that are present on the table, they cannot be applied to troopers with Airborne or Hidden Deployment. 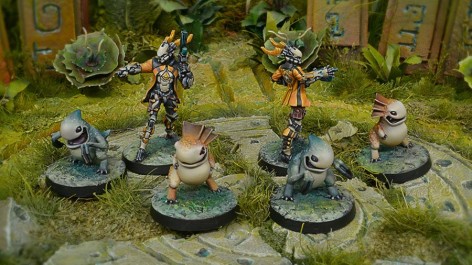 We’ll tackle Symbiomates first as they have one primary function.  If the model with symbiant armor is hit with fire and it has a Symbiomate attached, the effected model does not roll an ARM check against the fire, the model simply loses the Symbiomate and the model is not forced to make a guts check.  If the model was hit by both fire by two seperate models on the same order, the Symbiomate absorbs all fire attacks executed in the same order.  However, the Symbiomate does not deflect any other ammo type, which would be resolved as normal.  Since models with Symbiant armor are particularly susceptible to fire, dying instantly if a fire ARM check is failed, this ability to shrug off an order’s worth of fire is huge.  The Symbiomate’s effect is a passive one, and does not require the model to spend an order to activate.  As such, the Symbiomate’s effect works in the reactive turn as well without consuming the ARO (automatic response order).

Now we’ll take a look at SymbioBombs.  Symbiobombs have a handful of various attack and support tactics….

The activation of a Symbiobomb requires a short skill/ARO.  Once activated (to perform one of the tactics above), the Symbiobomb is removed.  No line of fire is required to impact the opponent (if attacking), just being within the zone of control of the model, not the equipment (Symbiobomb).  It also can only impact miniatures with woulds instead of structure points.  So lets take a look at these tactics:

End Game –   When this tactic is used, you can apply two Damage 14 attacks against a single model or one Damage 14 attack against two different models in your zone of control.  To hit, the miniature activating this tactic must make a successful WIP roll per burst.  Each successful hit can be saved with a BTS save.  An unsaved hit results in a wound.

Eraser – User needs to make a successful WIP roll against the target (potentially face to face WIP roll).  If the attack is successful, the opponent makes a BTS save against Damage 16.  If they fail, the opponent is isolated.  For more information about what it means to be isolated, reference the N3 rule book.

Hellzone – Burst 2, like End Game you can apply both bursts to one opponent or one burst on two opponents within the zone of control.  This time the model using the attack makes a check WIP+3.  Each successful roll applies the effect of DT Ammunition, meaning that 2 BTS saves have to be made (per successful hit) versus Damage 13.  If the save fails, the opponent is immobilized.

I did request clarification of the rule to see how the opponent may defend against attack tactics (dodge, face to face wip roll, etc).  I did not get a response for this information in time for the article.  If others feel that there is ambiguity here, there will be a release of information in the official forums (and I’ll bring the answer back in a future article).

Each user can only sustain one active support Tactic.  But since each user model can only have one Symbiobomb attached to it, there would (currently) be no way to have a single model activate multiple Support Tactics.

Nimbus Sphere- By passing a WIP role, place a Nimbus Circular Template inside the user’s zone of control.  The entire template bust be situated inside the zone of control.  Effects last until the end of the player turn or until voluntarily canceled (whichever comes first).

Mirrorball – Similar to Nimbus Sphere, but instead of a Nimbus Circualr template, it’s a White noise template.

The DiRT – My Take On the Kaeltar 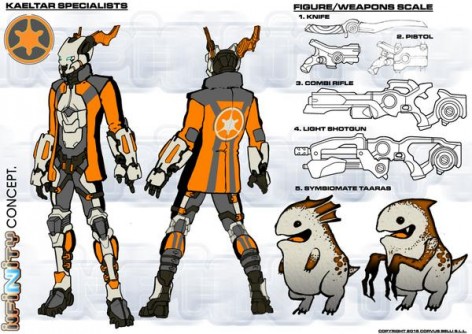 I ran through all the things that we’re seeing with this new model.  ESPECIALLY, with the Symbiobombs, and I came to the realization that this is Tohaa’s way of addressing a lack of offensive hackers.  The only difference is that the offensive tactics of the Symbiobomb impacts fleshy wound models instead of the typical hacking protocols that impact (for the most part) technology (structured miniatures).  These rules give the Tohaa their own spin and playstyle instead of homogenizing them with all the other factions.  The Symbiomates finally make the Gorgos feel less like a paper cannon.   I completely appreciate that they are taking steps to ensure that each faction/sectorial has it’s own tricks that allow for the game to truly feel balanced and games between different opponents to feel fresh.  I also enjoy the fact that they are not dismissing and retconning the fluff of each army.

As soon as I can get my hands on these models, and get them painted, we’ll start evaluating them with some battle reports.

Want to know what to do with those cards that come in dire foes packs?  Jakob Andersson‎ incorporated it directly into his terrain, I honestly think it’s brilliant. 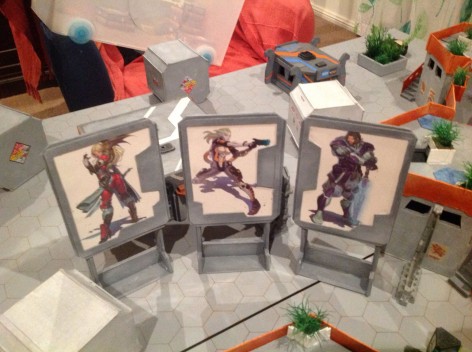 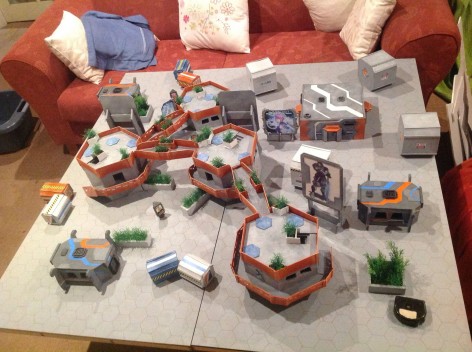 So that’s the the news, the skinny, and the dirt of the newly released Tohaa Kaeltar rules.  What do you think of this?  Does it inspire you to take another look at Tohaa?  Do you think it’s a sign of what we should expect from GenCon?  As always, you can find me here, on Facebook, or on YouTube. 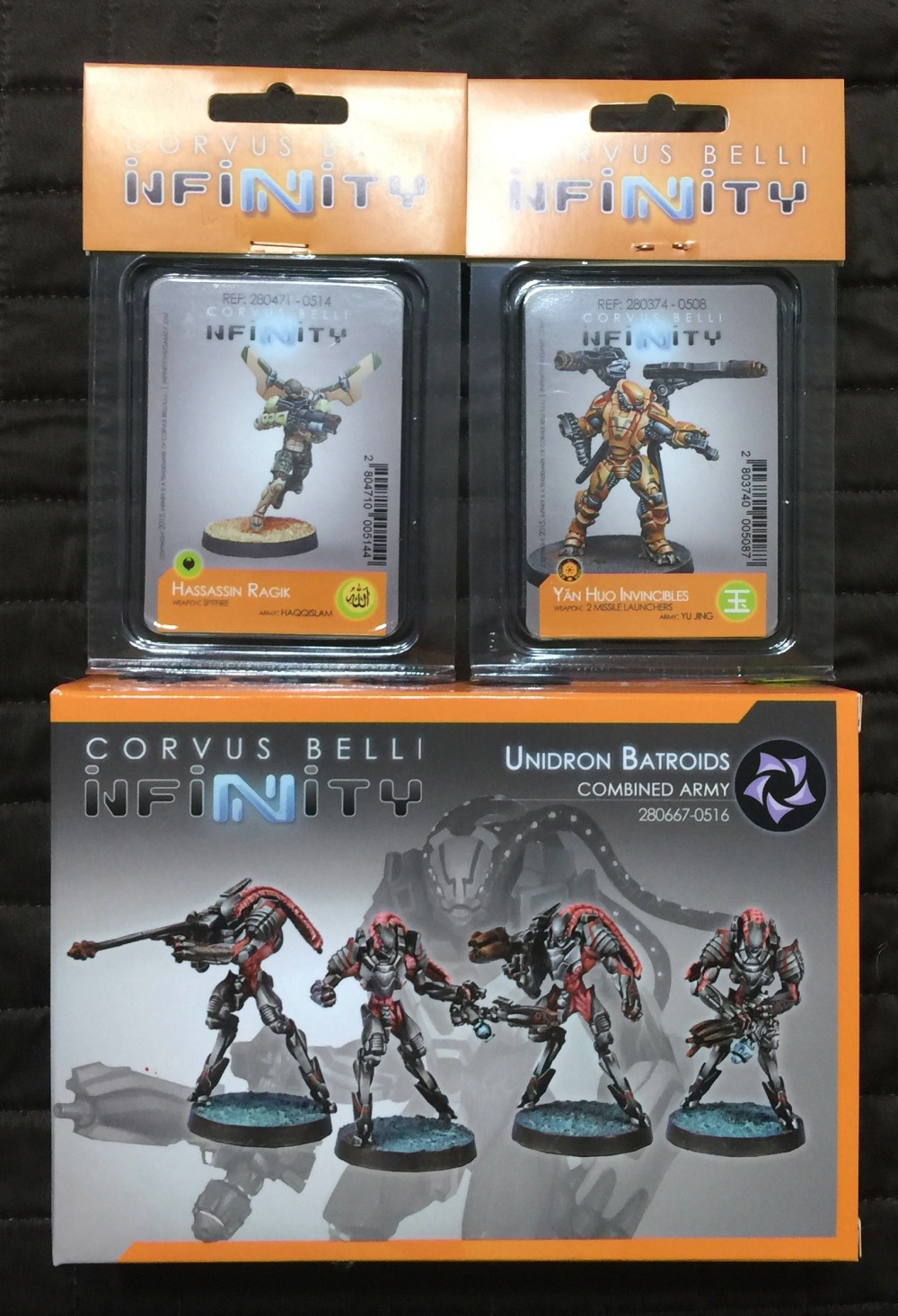