The shadows never moved. Even as the baleful, dead-light of The Harrows waxed and waned according to the unfathomable tides of the Empyrean, even as the blood-shot system star traversed the roiling tempest of crimson warp flame that passed for sky, the shadows did not move. They were as much a part of the landscape as the ruins that jutted from the grey, lifeless earth like decaying teeth. In contrast to the sanity-blasting kaleidoscope of impossible lights and colours not seen since the dawn of reality, the planet itself seemed bleached of all colour, a blasted monochromatic landscape reminiscent of an old pict still. The trinity of warp storms known as The Harrows had obliterated all life on this once fertile and loyal Imperial holding, its name forgotten and its people swallowed body and soul by the warp.

The wind which seared the skin but yet sent chills down your spine carried the half-heard cries of the damned, and the obscene curses of those that had damned them. Thirteen ignored the voices, just as he had for the last sixty two solar days, though solar days were hard to keep track of when this systems star frequently reversed its course through the blighted heavens or froze in place all together for hours at a time. He had made the frozen shadows his home, enshrouding himself in the inky darkness, as tangible as a blanket. There he had become as still as the rest of this dead city, his breathing and heart rate had slowed to the point that all but the most precise medical equipment would fail to detect life in him at all. His entire life’s purpose was condensed into what he could see through the multi-spectrum scope lens of his exitus rifle. “If looks could kill” Thirteen thought, allowing himself a rare smile. Chastisement. Admonishment. Concentration lapse.

Probability of one-shot kill below 87%. Concentrate. Enter target meme mantra. Thirteen cycled through the mission and target parameters which had been psyk-seared into his frontal cortex. In his mind he could see the target as clearly as if it stood not a metre in front of him. Decades of training and psidoctrination took over as Thirteen went over his target information and the most efficient means to expedite a kill shot. Target class: Astartes. Psyker Grade: Kappa Alturis. Multiple vital organ redundancies. Reinforced skeleton and fused ribcage. Combat abilities rated at: Omega Mortis. Equipment: Tactical Dreadnought armour of unknown mark. Known weaknesses’: Eye lenses, rear knee, elbow and thigh joints. Gorget. Shoulder joint and rear cooling ducts vulnerable if suitable upward firing arc can be attained. Coriolis effect correction: Complete. Trajectory: Clear. Addendum: Storm Shield provides 100% ballistic protection to approximately 33% of target from left side. Target right side for increased lethality percentage. Target specialises in asymmetric, anti-malefic combat. Conclusion: eye lens shot from distance only chance to clear objective. Chance of agent survival 15%. Thirteen exhaled as he recalibrated his Exitus Rifle sight to compensate for a slight alteration in air pressure.

The ridiculously low chance of survival did not bother him. He was the mission. Nothing else mattered. The fact that he had been mind-wiped was testament to the fact that the Temple had rated his chances of making it back as negligible. His name and memories erased so that his target could not psychically rip that information from his mind. Accordingly, Thirteen had destroyed the courier vessel that had unknowingly brought him here. Its crew reeling from the shock of translating into the wound in reality that was The Harrows instead of the routine run to Praexis that they thought they had been on. They did not have long to linger in their horror as Thirteen had efficiently dispatched the crew before they could reverse course. Staying hidden from the human crew for 4 months had been mere child’s play for an operative of the Officio Assassinorum. Staying hidden from his quarry would be on another order of magnitude entirely, Astartes being to normal men what cats were to mice. Blind mice.

A gust of scorching wind howled through the desolate plaza beneath Thirteen’s hide carrying sibilant whispers of blood, death and skulls upon it, giving the impression it was the ragged breath of the warp itself. The hairs on the back of Thirteen’s neck bristled but not because of anything so prosaic as fear or apprehension. His enhanced metabolism and mind rendered such human afflictions impossible. No, his senses, tuned to a razors edge, had picked up on a massive spike in air pressure as well as a precipitous drop in air temperature. Thirteen pressed his rifle against his shoulder and trained it at the actinic flash that engulfed the plaza below. A score of silver armoured titans of war stood on the blasted grey earth, arcs of warp lightning sparking from their armour. Before the Astartes had even fully translated back into the real, Thirteen held his breath as he gently squeezed the trigger. The rifle bucked violently in his grip sending a turbo penetrator shot straight through the right eye lens of his intended target.

What a sight! Amazing looking board just perfect for this Classic Daemons vs Grey Knights battle. Looks just like the kind of place you could imagine such an encounter happening. A blasted town or city on the edge of reality. The board has such great little details such as the wooden panelled boards on the windows which are magnetised, the great looking burned dead trees and the lava craters. Fantastic! Well worth the trip! Lets Do this! To Battle! Exitus Acta Probat: The Outcome Justifies The Deed.

Sergio starts to deploy his units as my only 2 units on turn 1 (Callidus Assassin, Vindicare Assassin) will be in reserve and infiltrating. He starts by deploying his Dreadknights on either side anchoring the line.

Draigo and his unit deploy in the centre of the board ready to walk their way up the board causing havoc! These are beautifully painted and based models of Sergio’s and an extremely tough unit with 2+ armour, 2 wounds, invulnerable saves and FNP! They are going to be able to soak up a heck of a lot of punishment…

The Interceptor Squad deploys on one of the far ruins making good use of cover before they advance.

Sergio deploys his Land Raider Crusader in the centre of the board ready to also move and unload its passengers (the Grey Knight terminators) into combat and possibly glory.

Turn 1 (Assassins & Daemons) The only model I had deployed is the Vindicare Assassin who was placed in cover with a view over most of the battlefield. I don’t intend to move him at this stage! (Location, location, location!) So with no movement on my behalf and the Vindicare being the only model for me on the table its straight onto the shooting phase. Unfortunately he can’t get a bead on his target, Draigo, so I opt to shoot at the second most threatening unit in my opinion one of the Dreadknights! I fire a turbo penetrator round and mange to wound it but some great saves from Sergio see’s his invulnerable saves past on a 5+!

Turn 1 (Grey Knights) Sergio starts his movement phase and moves his Land Raider and Dreadknight straight up and towards the dead centre of the table. It’s a very difficult movement phase for Sergio as he has no clue what units I will deploy where on my deployment zone. He needs to try to gain table control whilst staring down the Vindicare’s barrel.

Turn 1 (Grey Knights) Now The psychic phase with a frightening pile of dice in his hands Sergio starts by granting some of his units a plus 1 to their invulnerable saves using Sanctuary and then uses Gate of Infinity on Draigo and his unit to teleport them forward even closer to the Vindicare. He probably isn’t so sure about his mission now!

Turn 1 (Grey Knights) Draigo and his unit, The Land Raider and the closest Dreadknight all fire everything they have got at the Vindicare! But my saves are impressive as i roll countless 3+s using my stealth rule combined with the ruins basic 4+. Sadly I loose one wound from the Land Raider’s Assault Cannon. It could have been a lot worse but still not great!

Turn 2 (Assassins & Daemons) The Callidus enters reserve from the grey knights deployment edge making her an instant threat. Furthermore her rules are such that at this stage she can only be targeted by snap firing at her!

Turn 2 (Assassins & Daemons) The Warp opens and the Daemons appear….

Turn 2 (Assassins & Daemons) What a sight 2 units of 20 Khorne Bloodletters leading the assault. I deploy my Blood Thirsters on either side of the line my Soul Grinder in the centre and the princes in support.

Turn 2 (Assassins & Daemons) My fierce Warlord targets his prey! Great looking figure and now buffedup with +1 wound and 4+fnp due to some great (not lucky, great! ;)) rolls on the greater rewards table.

Author: Steven Pardo
Steven is a Gibraltar-based veteran tabletop wargamer with over 10 years of experience. He is the man behind SN Battle Reports. His specialty is organizing Warhammer 40K narrative events. He began writing for BoLS in 2015.
Advertisement
Armylists Battle Reports Warhammer 40k
Advertisement 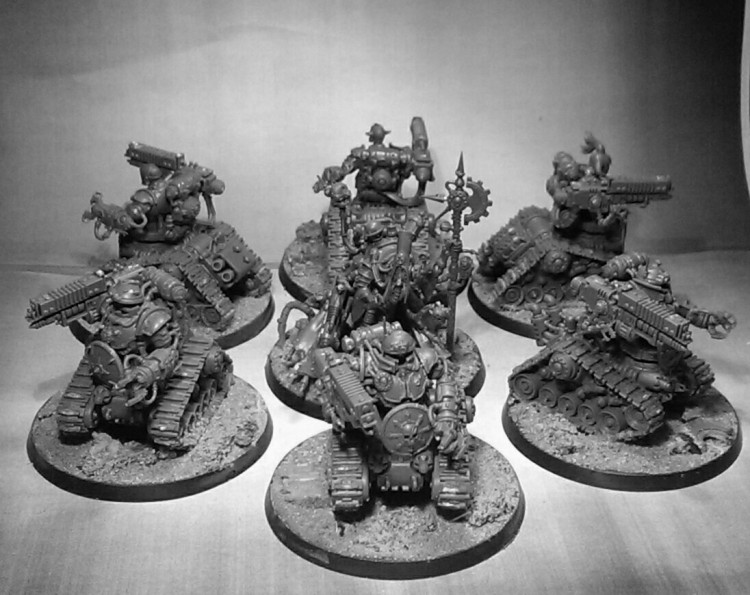