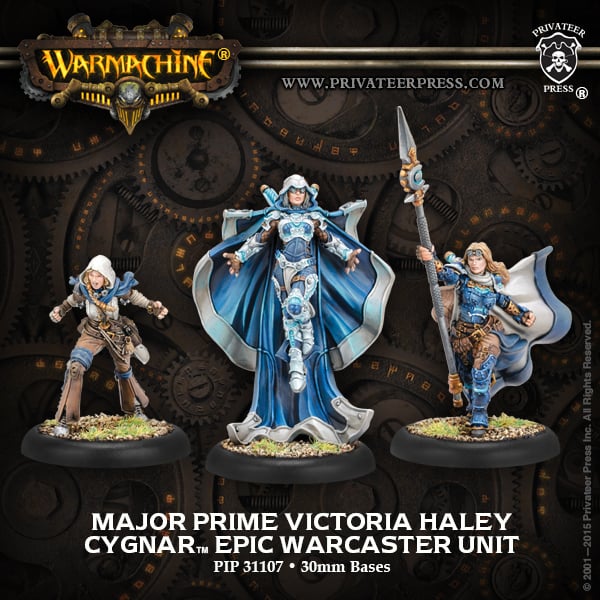 Yes, the daughter of Cygnar has come back to life and she has brought some sisters with her.   You don’t get 1 Haley, not 2 Haleys, but 3 Haleys!!!

Haley can bring her past and future self into play just like she would cast a spell for 2 focus a pop.  She can upkeep them for 2 focus a pop too.  Quite expensive having your future and past self out there.

Young and future Haley are in a unit with Prime Haley.  With 8″ command that is pretty solid are of play to spread out the pain.  Young and future are incorpreal and both pack some nice tech.  Young Haley is all about the DPS.  She has 2 damage spells and a reach.  She always add’s a dice of damage to her attacks.  So, 4 dice force hammer is legit.  However, focus 4 will make those hit rolls a little harder.  Future Haley is a troop supporter with ghostwalk and revive.  Her gun has true sight so she can hit those annoying stealth models just like gun mages.  Both Haleys will lose incorporeal if they use there melee/ranged weapons so consider it when doing so.  The real niceness that having old and young versions of yourself walking the battlefield is Prime Haley gets to use all their spells.  This gives Prime Haley a quite a large list of utility.

However, she will be focused starved usually when both of her versions are out and about.  This is where the feat comes in.  An additional 2 focus for all of the Haleys and additional 2 focus stat.  Meaning Young Haley goes from a 4 to a 6 on those magic attack rolls.  Prime Haley is pretty similar to Haley1+2 stats wise.  Set defense is still around so good luck charging her.  Her spell list is pretty tame without the extensions of her self.  She has a ranged upkeep removal.  Her upkeep lets unit’s move after activation.  She can dominate warjacks like always.  And the most nasty of her spells is the Flux.  All friendly’s within 5″ of a Haley get +2 def and all enemies get -2 def.  On paper you might not be as impressed as you should.  In game this spell is a problem.  If you don’t have blessed/spell piercer/wraithbane or some other spell buff ignoring mechanic you are going to be in for a sad time.  All of a sudden warjacks are circle level defense statistics, boomhowlers are 14 def, and gun mages go to ironfleshed kayazy defense status.  Don’t forget the Haleys are this insane defense too. 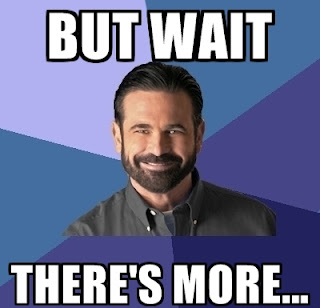 What Haley can do for you?

The three big things she bring to the table is the aforementioned defense buff, some interesting mechanics for trenchers, and revive troops for super long threat ranges.

The defense buff is super nasty no matter where the Haley’s are.  Even forgeguard go to decent defense stats with a Haley in their backfield.  Think about combining this with other defense buffs to get to truly epic levels.  When your opponent charges your heavy and they are like 3s to hit and you say “not so fast” it will be an eye opener.

Trenchers with tactical supremacy are the poor man Gatsby 2 cloud.  The trenchers can advance, place there smoke clouds, and move 3″ after effectively clouding a very wide space.  It is an annoying mechanic if you have ever fought against Lich2.  Doesn’t slow legion down much though.

Revive on cavalry is a very powerful mechanic.  Don’t be scared to get 2 or 3 stormlances killed going for juicy targets.  If your stormlances get killed you can now revive them in some really dirty spots for painful charges.  Remember this spell is faction, so bring Murdoch if you plan to revive merc models.

Force Hammer can be a game winner!  Especially a 4 dice damage roll.  Counterblast with additional dice can be a threat to even armor 20 troops so don’t be bashful on slinging it around.

Her extra damage dice is on all attacks.  So even that Pow10 staff can be a threat.  If you charge through, remember Future doesn’t have a melee weapon so she won’t get to do anything but run.

Ghost Walk on gun mages makes them immune to free strikes.  This can make jamming models really sad when you walk away and then shoot them in the face.

Future Haley has a very powerful ranged attack.  Don’t be afraid to lose incorporeal to kill an annoying stealth solo.

Haley is not a camper so if you can get some damage on her it will count.  Try things like slams, blast damage, and other non targeting effects to get around the high defense models.  Bring those blessed weapons out!  Models that ignore spell buffs will be invaluable in a Haley3 vs. matchup.  Consider including a Naga, or a Warpwolf Pureblood in those hordes lists.  Purification and Eyriss won’t help vs the defense buff though.

What do you think of the new version of Haley BOLS?  Have you fought against her yet?  Have you put her out on the battlefield to crush your opponents?  Please share your comments below.