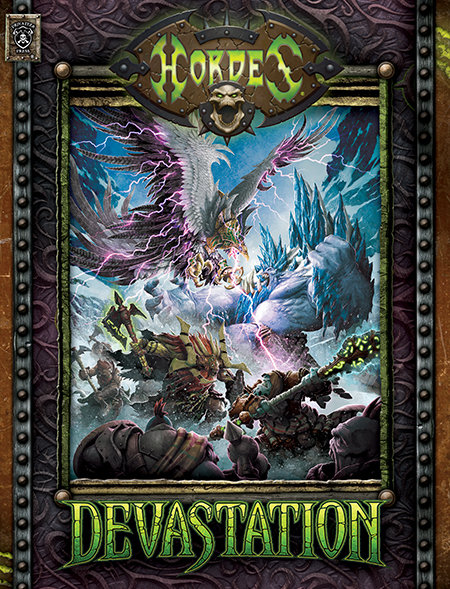 Privateer pulled the covers off the next Warmachine/Hordes book of the year: It’s sounds pretty AWESOME!

Choices often come with unintended consequences, and doubly so for those choices born of desperation. A decision made under duress, in the heat of the moment, can lead to exactly the end it was meant to avoid. Such is the story of Madrak Ironhide and his choice to wield the ancient and terrible axe Rathrok in a desperate bid to save his people. As the power of the axe stirs and grows with each blood-soaked battle, the Devourer Wurm turns from its eternal battle against Menoth in Urcaen and casts its gaze upon the world of the living. Sensing its master’s desires Wurmwood, the Tree of Fate, carefully manipulates events from the shadows, preparing to enact a ritual that will part the veil and unleash the Devourer Wurm on Caen. Amid these climactic events, legendary warlocks rise to the crisis, tapping heretofore-unknown inner reserves so they might avert the apocalypse…or perhaps hasten it.

As old heroes become new again, the wild factions of Immoren cast aside all pretense of hiding in the shadows and reveal the true extent of their might. Previously unseen gargantuans descend upon the battlefield, their footsteps shaking the earth as they heed their warlocks’ calls to slaughter. Whether it be the crackling electrical fury of the savage Storm Raptor or the multi-headed, acid-spewing nightmare that is the Desert Hydra, these fearsome warbeasts will rock the very foundations of war within the Iron Kingdoms.

HORDES: Devastation brings you the next thrilling chapter of the HORDES saga. Fight for survival with:

• New incarnations of some of HORDES’ most feared and revered legends.
• New and terrifying gargantuans ready to crush the opposition.
• New units, solos, and warbeasts ready to lend their strength to the battle for survival.
• New narrative fiction continuing the savage tale of HORDES: Exigence.
• A painting and modeling guide to help you prepare your forces for battle.
• Theme Force lists for each new warlock.

So, the Devourer Wurm now seeks to manifest itself on Caen!  That’s an arrival that may even worry Lord Toruk!

Privateer tells BoLS to look for this in Q3.