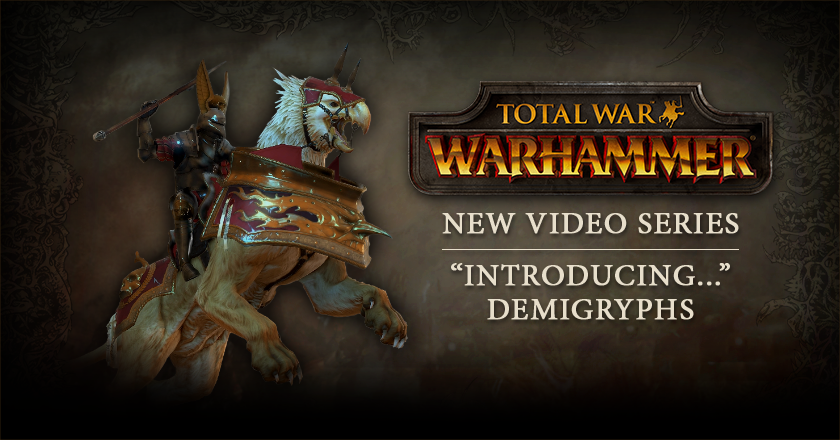 Sega is rolling out some awesome new beasties for you to feast your eyes on.  Beware enemies of the Empire!

This is the week you’ve been waiting for. On this Friday, July 17th, we’re releasing the first Total War: WARHAMMER In-Engine trailer.

To whet your appetite for that, we have a brand new series kicking off today. ‘Total War: WARHAMMER Introducing…’ will provide an exclusive look at some of the most spectacular battlefield units brought to life from the high fantasy, Warhammer universe. The series kicks off with the magnificent and ferocious Demigryphs, which you can check out below.

Part lion and part eagle, these noble monstrous cavalry are ridden by only the most renowned knights of the Empire. Clad in ornate plate armour, their densely muscled frames enable them to thunder into combat, tearing their foes limb from limb and spreading fear among the enemy ranks.

I LOVE the Lion-Eagle scream!

Author: Larry Vela
Dad, Gamer, Publisher, Pilot, Texan. All games all the time since junior-high. I started BoLS Interactive in 2006. I’m a lifelong tabletop & RPG gaming enthusiast, and internet publisher working to entertain and inform my readers every day. I've been playing RPGs and Tabletop Games since the 1970s. I'm been playing and covering Warhammer and Warhammer 40K for over 35 years.
Advertisement
Total War Video Games Videos Warhammer Fantasy
Advertisement