Today we delve into my Chaos Cultist conversions.  You will be needing lots of bits and some cutting tools – just like Khorne prefers!

My previous post had examples of various bits I used to create some Khorne Daemonkin Cultists.  I wanted to something other than the regular GW cultists models.  Not that they are bad but I wanted something different, more customizable.

Finding decent close combat human scale arms is fairly tough.  Mad Robot Minitures makes some and they look great but I didn’t want them all to the same arms.  So I started thinking what would Khorne do if he need some crazy humans to cause as much mayhem as possible but they didn’t have any weapons.  That led me to the idea of chopping they hands off and replacing them with blades, spikes, maces, flails and whatever else I could find.  I realize this will make eating and changing cloths difficult for these poor fools; but really, how likely are they to survive a single battle?  Not very – so I figure they won’t have to starve to death because they will likely be killed in battle and Khorne will be happy for their service and their skulls. 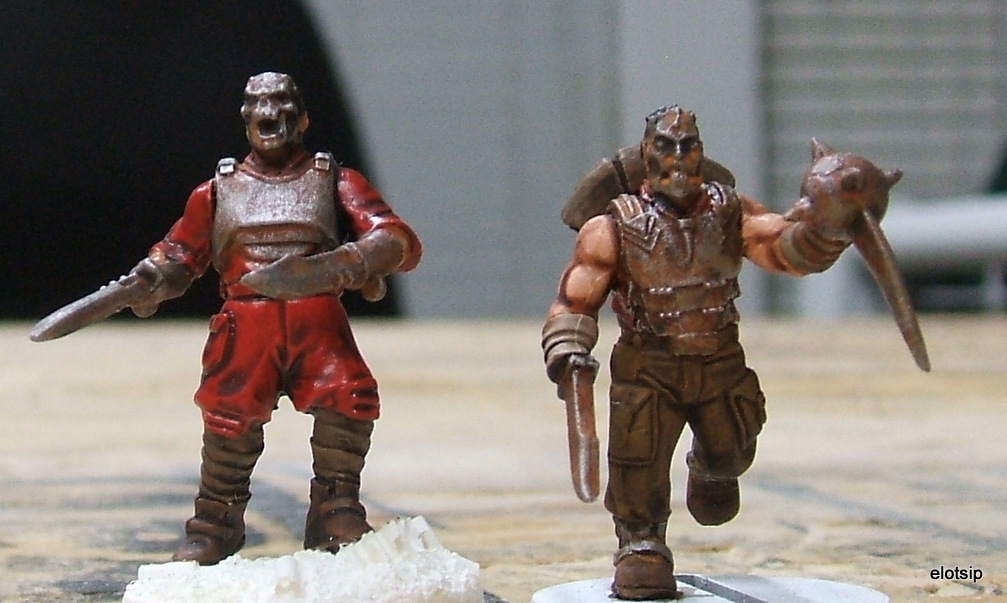 The two cultists on the left double as acro flagellents for my Radical Inquisitor Lord’s henchmen.  The center guy has a hand because I forgot to lob it off before painting… 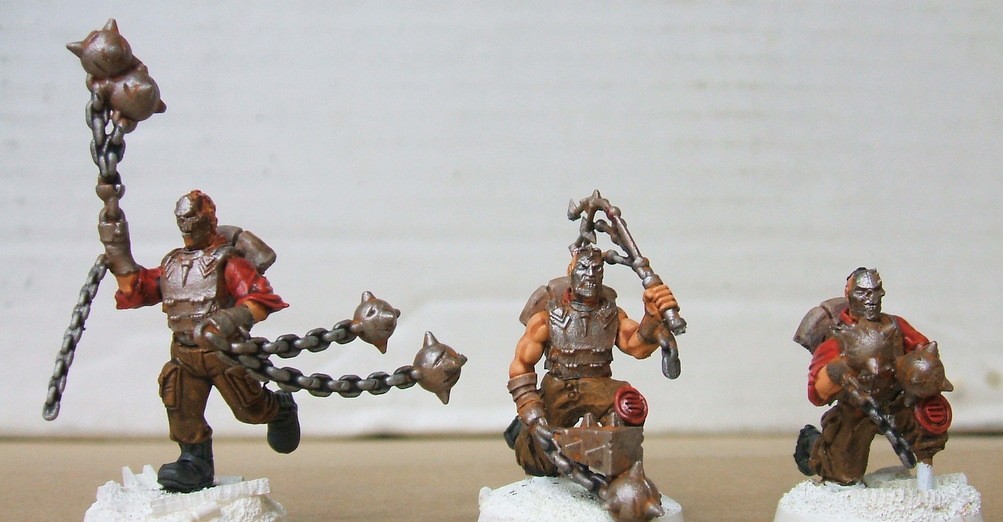 Here’s a couple more cultists / acro flagellents.  The center fellow is he Cultist Champion.  I plan to go back and add some khorne symbols to his back banner. 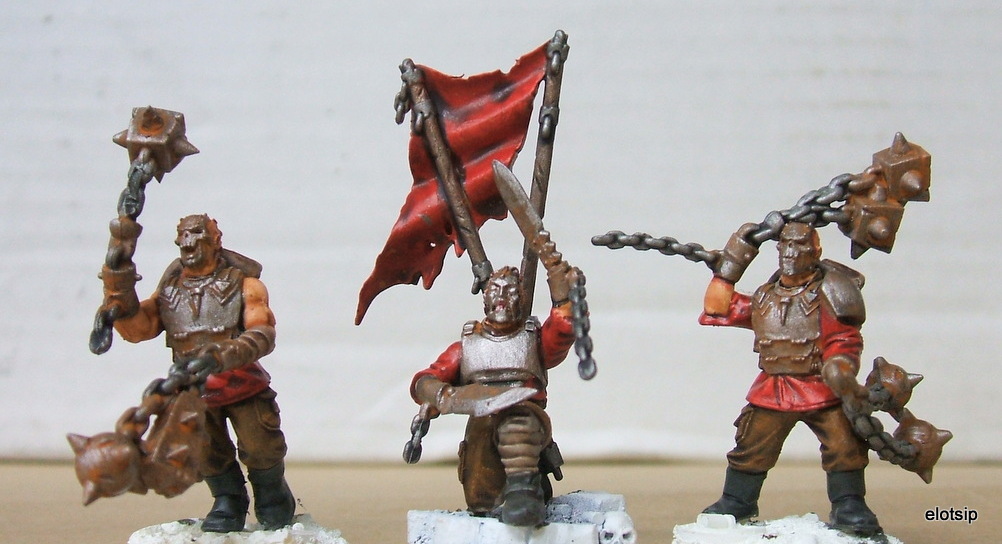 Four more boys, one with the SGT torso from the Blight Wheel set. 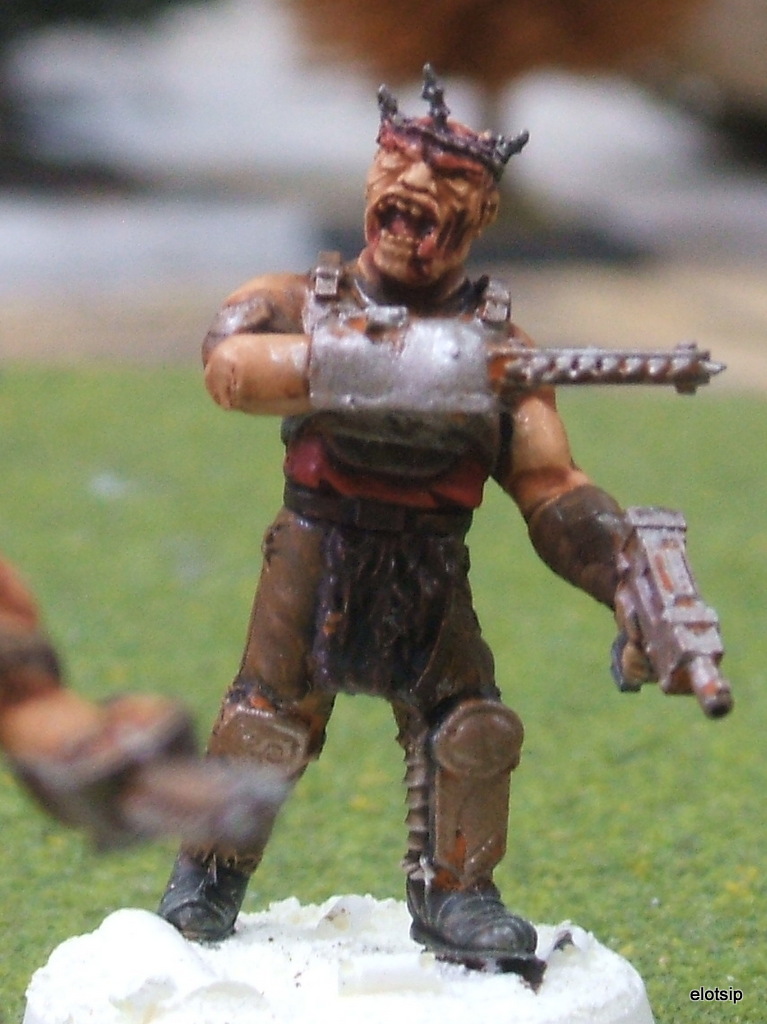 Cultist Champion with his back banner. 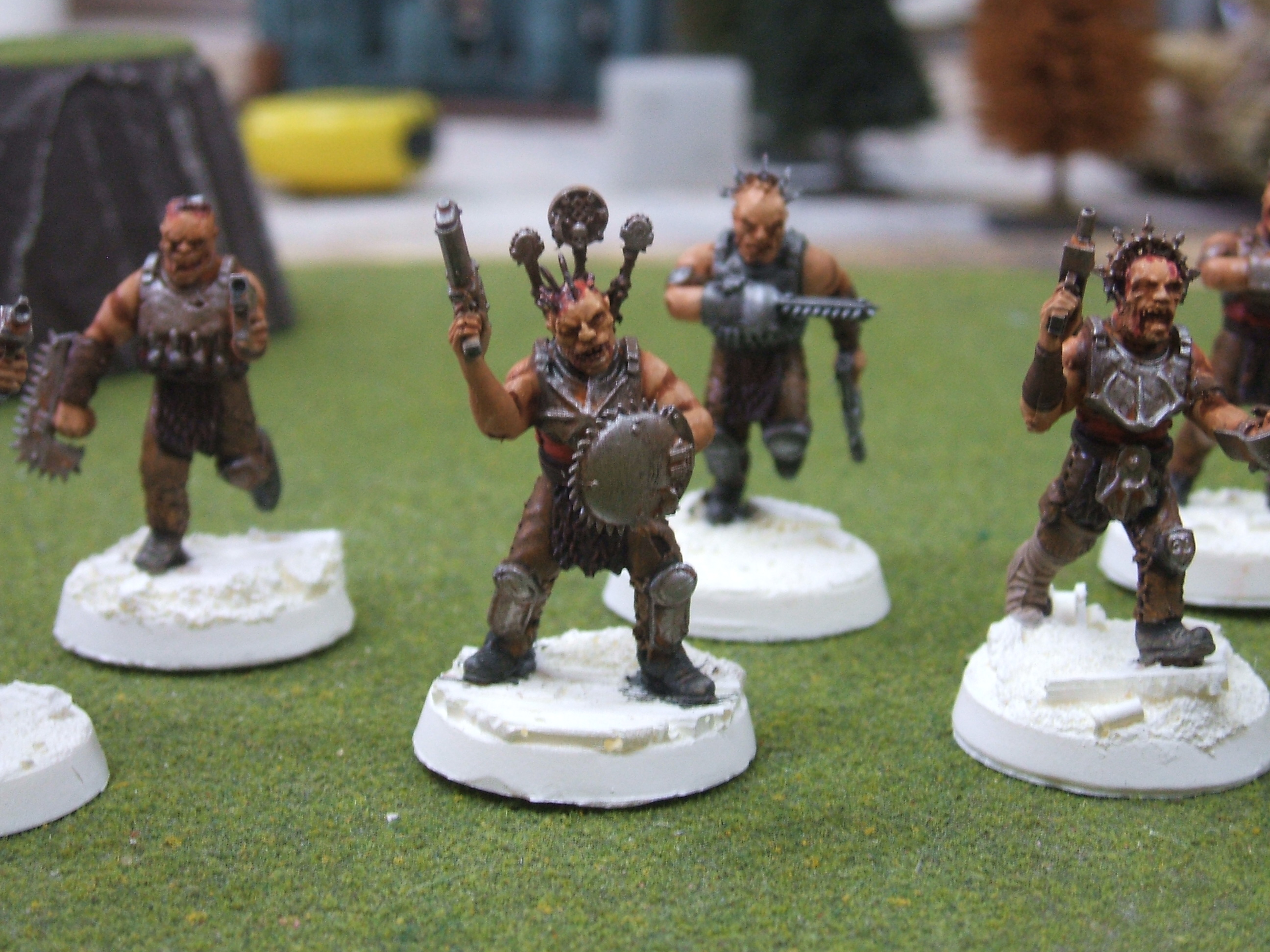 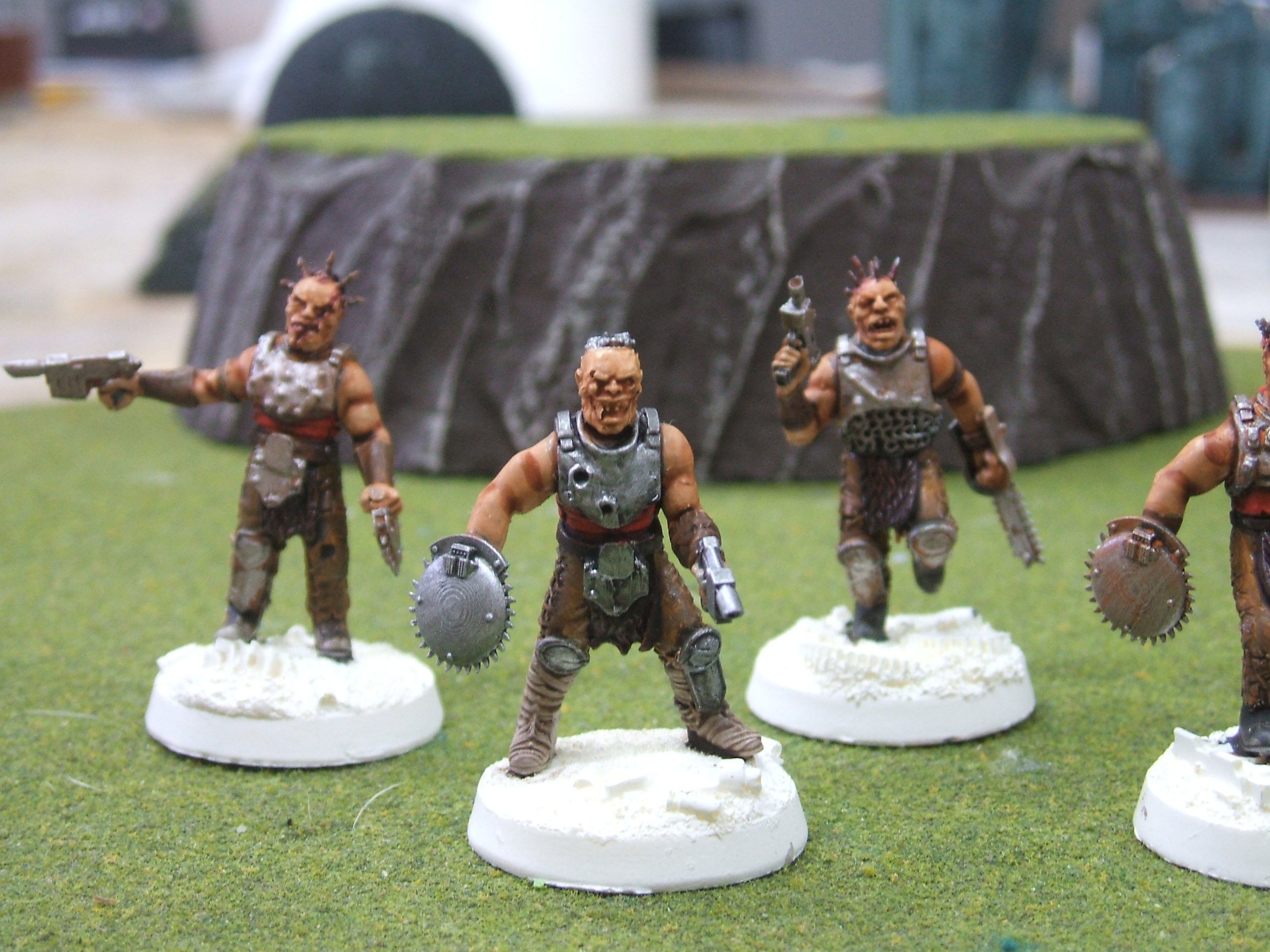 Here’s a shot of the whole group of khorne cultists.  I tried to make the armor and weapons seem to be in various states of wear.  Some of heavily rusted and corroded.  Others are fairly new looking.  I’d like to also point out that I did a very quick paint job on these guys just to get them on the table top.  Which is why they appear to be a bit glossy.  They will all get a dull coat once the bases are done.

Another unit of Khorne cultists are these guys.  They are made using the FW CRM Enforcer torsos, Cadian legs and Space Marine Scout arms.  I actually use these guys for Veterans in my CRM army but they work equally well as khorne cultists. 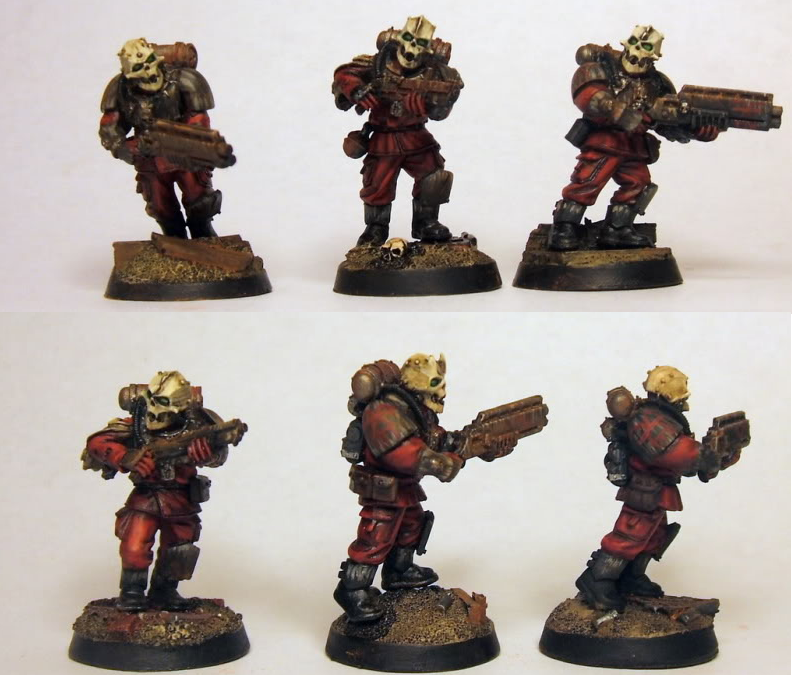 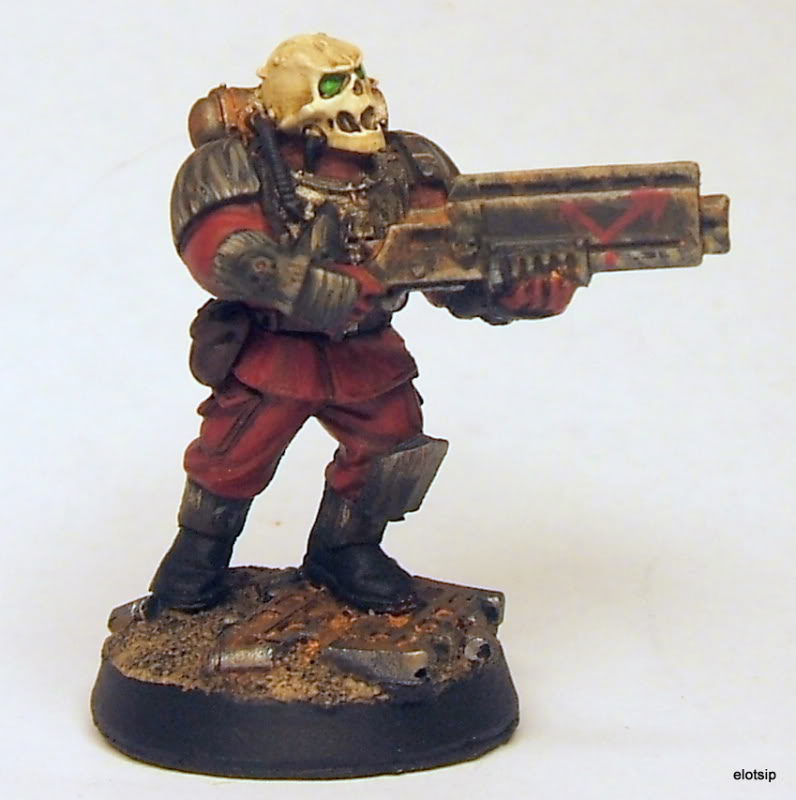 Another option for cultists are beastmen.  They seem like they would be nice cannon fodder and enjoy serving khorne.  I didn’t give them pistols because I wanted to keep the more barbaric feel to them.  In the game I just don’t shoot the pistols since they are not modeled.

I have far more cultists/renegades than any sane person needs, several hundred in fact.  I don’t generally use them all that much but I enjoy making various units and painting them.  I like to see which bits work together and what you can create using all the different option out there.  I’ve been able to cobble together some fun models this way.  Using the new AoS khorne guys will also work well with a little conversion work but I have not had them long enough to try that out yet.

Perhaps there will be a part 3 using those models.