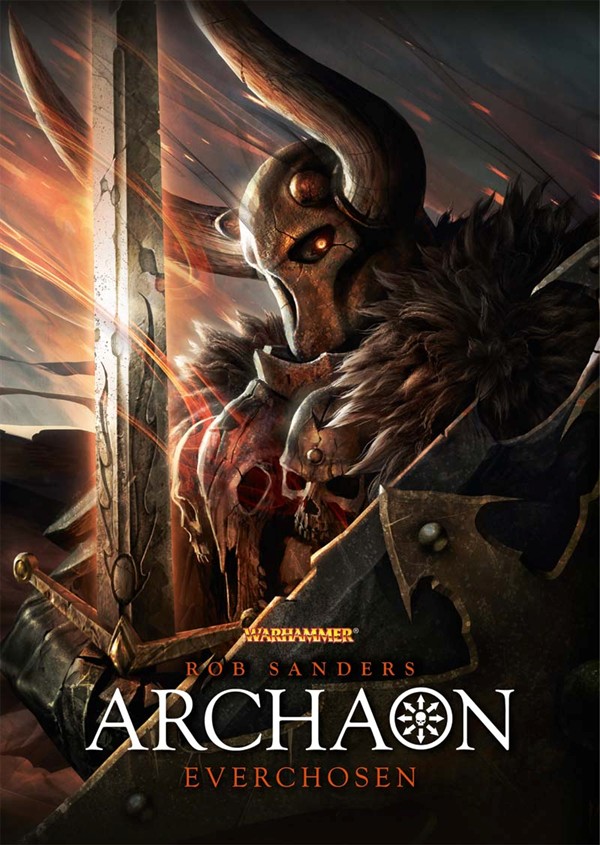 The End Times may have come and gone, ushering in a new age in Warhammer, but what do we really know about its architect, Archaon?

In book one of the two part series, Rob Sanders gives us an unparalleled look at what made a man once known as Diederick Kastner become the Everchosen of the Dark Gods, and it’s really, really good!

There are a lot of stories out there that claim to be origin stories for certain characters, but how many of them start with not just the birth of the central character, but the night of their conception?! It’s not a happy affair by any standards, as a small fishing village along the coastline is attacked by Marauders from Norsca. Our tragic anti-hero is the result of a marauder having his way with a woman who was only trying to distract the warrior long enough to save her family. It’s a very dark opening for a very dark story. Well to be fair, the story really opens up a few hundred years prior with Necrodomus the Insane, the man who wrote the prophecy of Archaon, being tortured by a witch hunter in Tilea. He is saved from his fate though by none other than Be’lakor, the Dark Master. It turns out it is actually the demon prince who wrote the prophecy through the mortal with the plan of usurping Archaon’s body at the last moment to finally become the Everchosen himself. This sets up Be’lakor to be the narrator of our story in a way.

One of the most interesting mechanics for me, which initially really threw me off guard, was the repeating of chapters. There are three chapter ones. In the first chapter one, the woman’s husband comes back in time to kill the marauder before the rape can occur. This was not fitting for Be’lakor though since he needed his champion, and between chapters we get a little excerpt from the demon prince talking about fate, then we are back to chapter one again. This time the town’s bells don’t ring out and the husband doesn’t arrive in time to stop it, but several months later the woman aborts the baby into the seas. Again Be’lakor won’t have it, and we get our final chapter one where the baby is born, killing the woman in the process and then shunned by the family. The infant is given into the care of a Sigmarite priest by the mid-wife and named Diederick, and so our story begins. This happens a few more times throughout the story. Our hero makes a poor choice, or is unlucky and dies, only for fate to rewind in essence and keep him going. The chapters never really repeat the same events, the second version of the same chapter will just pick up after his death and explain how he didn’t die, or at the most, overlap the events a little bit. It’s something I have never seen before and I really like how it was handled.

The story itself is split up into two parts, before his complete fall to Chaos and afterwards once he is searching for the ancient treasures. We get to see how he grows up, skipping a handful of years here or there. The Everchosen actually started life as a devout Sigmarite, not really a surprise since he was raised by a priest. Through a series or rather unfortunate events for everyone else involved, Diederick finds himself in the position to become a knight, pretending to be an illegitimate child of a former knight he squired. Taking up the surname Kastner, he becomes a warrior of incredible skill. The beginning of his corruption to Chaos is completely out of his control, and it’s almost a physical corruption more then a spiritual one. It’s quite sad since he doesn’t really want to be a servant of Chaos, but knows that with the taint of the dark gods upon him he will never be accepted back into his order. With the newly rediscovered prophecy of Necrodomus pointing the finger squarely at him as becoming Archaon, he also has to contend with the agents of the Grand Theogonist hunting down him and his remaining friends.

Without spoiling anything, for me the story picks up even more once he has fled into the north. As he treks across the wastes he gains power and followers, but always keeps his surrogate father and priest, Dagobert, close to him. Their relationship is pretty interesting and sad since Dagobert refuses to give up on the man he raised as his own son, following him into damnation and acting as his guide in finding the Chaos artifacts. Another companion he dragged along was a girl named Gisselle, who he had originally saved from Beastmen while still a knight of Sigmar, and then forced along with him into the wastes. Even though she hated him now, Archaon refused to let her go for her own safety. He knew that the Empire would kill her just for being associated with him. Their’s is the most interesting relationship to me, as it start out as something hateful, and eventually twists into something loving and physical. Through all this Giselle still tries to kill him to spare the world its doom, but can never bring herself to do it. She also tries to end her own life a few times, but again, cannot bring her self to do it. It’s a fairly adult theme for a Black Library book, since they usually tend to shy away from romantic relationships, and is a breath of fresh air.

The last quarter of the book really ramps up the action with a suitably epic battle at sea. We even get to explore a few previously unexplored cultures and lands, such as Cathay, Nippon, and most exciting of all, the Southern Chaos Wastes. Some of these places only get a brief mention or have a character hailing from their lands, while others, like the Southern Wastes really get their time to shine. Rob Sanders made the Southern Wastes a truly horrific and alien place. It makes the Northern Wastes look nice in comparison with its vestiges of civilization. It’s somewhat sad that these previously untouched areas of the map finally started to get explored right before the whole world ended, but it’s refreshing and interesting nonetheless.

It’s a testament to the strength of Rob Sanders’ writing that he managed to make Archaon such a tragic and extremely human character while still maintaining the aura of power, dread, and epic-ness that we know and love from his in game character. It really was a balancing act since he had to be human enough for us to relate to him, but at the same time this is the man who literally ends the world. Archaon truly loathes what fate has done to him. He loathes Sigmar for abandoning him and he loathes the Chaos Gods for corrupting him. His whole motivation is to end the world once and for all, gods be damned. You have to love a character who will destroy an entire world just to spite the gods. If you’re thinking what’s the point of reading this now that the End Times are over, remember, Archaon is still around and kicking in the Age of Sigmar. He is the Everchosen of Chaos, so powerful and determined that even the Dark Gods have a hard time controlling him. I am really excited to read the second book in the series, hopefully it gets released in paperback, and equally as excited to see what happens with him in the new game.

Archaon: Everchosen was a fantastic read, equally dark, tragic, exciting, and gripping. It’s a rather long book too and the cast of supporting characters are equally as compelling as Archaon himself. I didn’t even mention his bodyguard, the Sword of Chaos, or the Cathayan sorcerer of Tzeentch he meets later on.