Infinity has an Official RPG coming to a tabletop near you – and they’ve launched a Kickstarter Campaign. Check this out!

In the twisted jungles of Paradiso, humanity fights for its survival. The fierce, alien warriors of the Combined Army have poured through the Acheron Gate, descending upon the emerald jungles of the newest colonial world in a seemingly unstoppable torrent. The bestial Morat pound the Paradiso Front, where brave men and women fight ceaselessly to maintain a desperate defensive line which the sly Shasvastii penetrate with devastating ease. In the star-swept skies above, the collected might of humanity’s armadas maintain a life-or-death blockade to cut off an endless horde of alien reinforcements. And if any of humanity’s fractious forces should falter, then all may be lost…

But beyond that terrifying holding action, the intrigues and adventures of the Human Sphere spin on. Space pirates cruise through the shattered planetoids of Human Edge. Scientist adventurers delve the oceans of Varuna. Merchant guilds scheme amidst the scourging sands of Bourak. From Yutang, the Emperor gazes forth from an uneasy throne. Titanic war machines stride across the icy plains of Svalarheima. Byzantine hypercorps struggle for dominance amidst the chrome towers of Neoterra.

For the last ten years, players have tested their mettle upon the battlefields of the Human Sphere in Corvus Belli’s hugely-popular Infinity skirmish game. Now you can expand your adventures, diving deep into the amazing, never-before-seen depths of the Infinity universe with the ultimate science fiction roleplaying game. 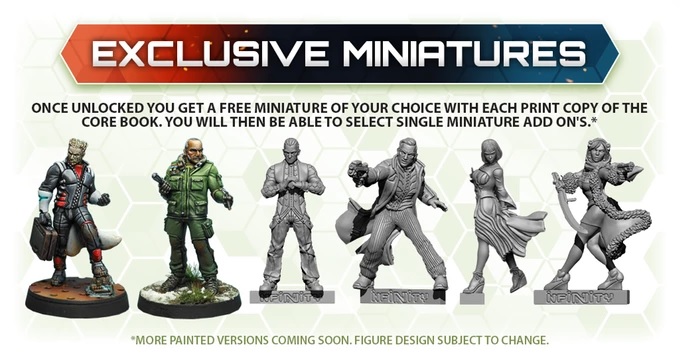 The Infinity universe was launched by Corvus Belli as a hugely-popular tabletop skirmish game in which sci-fi themed miniatures simulated futuristic battles across the alien battlefronts of Paradiso and the internecine conflicts of the Human Sphere. Before there was a skirmish game, though, there was an RPG: Infinity started life as a homemade RPG setting for the early roleplaying adventures of Corvus Belli founders Alberto, Carlos, Fernando, and Gutier. We’ve been playtesting the Infinity RPG with hundreds of people for the last 9 months, working hard to recapture the excitement of those first sessions and ensure that the feel of the Infinity universe will be captured in your own campaign!

This Kickstarter has funded the production of a beautiful full colour, hardback 368 page core rulebook for the roleplaying game. It will be sent out in PDF in December and the printed books in February 2016. We are also going to fund Faction supplements, campaign, amazing geomorphic tiles, custom dice, accessories, upgrades to increase the content in certain  books and much more

The 2d20 system is a dynamic, narrative system, designed to produce varied and interesting results from dramatic and action-packed situations. Characters roll two d20s, attempting to roll as low as possible on each one – the more dice that roll low, the more successes the character scores.

Tasks will require one or more successes to be successful, and any successes scored beyond that minimum become Momentum, which can be spent to achieve a variety of advantageous effects. However, this can come at a cost: characters who wish to succeed can push their luck, rolling extra d20s to boost their chances of success and the Momentum they generate. However, each extra d20 comes from the character’s resources – such as ammunition – or adds to a pool of Heat that represents all the things that can go wrong in a mission, which the GM can spend to complicate adventures and scenarios and make the characters’ lives interesting.

You can expect lots of support for 2d20. The system is currently in use with the Mutant Chronicles RPG and the planned Conan and John Carter RPG’s from Modiphius with more to be announced.

Corvus Belli and Modiphius Entertainment have already hit the goal on their Kickstarter – which WILL be funded Sunday, October 18, 2015 at 2:00 PM CDT. This bodes well for all backers as there is still plenty of time to unlock new stretch goals. So go check those out and if you’ve ever wanted to play an RPG in the Infinity setting go back them!

It’s an Official Product, it’s Funded and it’s Infinity! I am IN – My Nomads are itchin to level-up…