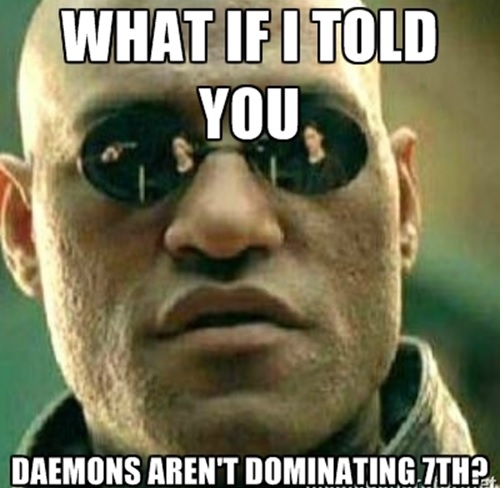 Hi everyone it’s Black Blow Fly with a special treat – an interview with Aaron Aelong who’s army just won both the invitational and open at NOVA 2015.

I watched some of the live streams of the matches on the top table and thought Aaron had a good shot with his army since it can counter the top builds plus it features some of the more currently powerful things in the game like Invisibility, a big mobile Deathstar and daemon summoning. I was happy happy to see Aaron win because for me it’s nice to have Marines back at the top and he’s a good guy.

Q: To start off I asked Aaron to first tell us about himself and how he got into the 40k hobby…

I live in Indianapolis, Indiana and I started playing 40k at the end of 4th edition in 2008-2009. I started miniature gaming playing fantasy and started with very old Bretonians. I liked the idea of tough guys that were hard to kill but could really pack a punch (think Wolverine). The fantasy crowd died down so I decided to try 40k.

I am a former United States Marine and liked the idea of Space Marines. I bought a bunch of old 2nd edition models that were terminators (like Bretonians) and went into the local game store to kick some tail. Needless to say the guy that asked me to play was the best guy in the store and destroyed me. I immediately asked to play him again and got destroyed again. I am a “hyper-competitive” player and was furious that I couldn’t beat him. I tried a few more times the next weekend and quickly realized that my terminators were tough but didn’t have the tactical flexibility to win… I traded my termies for tactical Marines using all the tools that were available. I started winning a few after a few months of getting continually beat by Scott. I was relentless in banging my head against the wall (Scott) until I was competitive with him.
The Space Wolf codex then came out in 5th edition and I knew that was my codex. An assault based army that didn’t follow all the rules of the Astartes! After playing in some local tournaments I quickly became one of the three best players in Indianapolis with Space Wolves. I started picking up other armies such as Tyranids (Monstrous creature mash), Imperial Guard with Inquisition, Grey Knights, etc.
In 2011 I was the biggest fish in my small pond of the Midwest and decided to go to The Nova Open. I had never played anyone outside of Indiana so didn’t know what to expect. Some of my friends who chat with Mike Brandt and told him I was pretty good so I was selected as an alternate for the NOVA invitational tournament. The rest is history:

Q: Next I asked Aaron what the hobby means to him…
The game of 40k is a place where I can focus my mind into a competitive mind duel with another person. I have always had a fascination with war games. Stratego and Risk where my first delves into wargaming strategy. There is something special to me about meeting someone across the table top and trying to out-think them. Yes it’s a game of toy soldiers that I love.

It’s funny when I get home from events and talk to my kids now and ask them “Hey guess what?” They reply kind of bored…. “You won again.” It used to be exciting to them but winning has lost its luster to them. I still enjoy winning each and every time, but I also am learning to love the time with others across the country where I have built a lot of friends.

Q: First can you tell us how you went about designing your army list for NOVA ? What were your sources of inspiration?

I have loved assault armies since I started playing 40k. When 6th came out, “assault was dead” per most of the gaming community. I played Eldar/Tau for a year and missed my Space Wolves so after the new Space Wolf codex I decided to develop a list that could stand up to the shooting lists out there today.

Q: I was very impressed you beat both of the players I consider to be the top daemon players. I honestly think a lot of players don’t realize how strong is the daemon codex. Could you describe your game versus Nick and what were your main strategies going into it?

Chaos Daemons are the anti “every other codex” army. Daemons are the strongest codex if played correctly. A lot of people will tell you I am crazy but the tools the daemon codex has can deal with any army and can manipulate the way the game is played and that is the most powerful tool in the tool belt.

I hear what you are saying about super strong daemon players. I have had the pleasure to play against whom I would consider the 2nd best daemon player in the US for almost 5 years. His name is Justin Curtis. He was 2nd this year at Adepticon only to Nick who barely beat me in the finals. Alan Bajromovic is an amazing player and also a good friend but Justin only plays daemons and has honed his skills against me for half a decade. He now lives in Chicago ironically near Alan. I have often theorized and practiced against Nick with Justin the past few years. I would rank the top three Daemon players as Nick, Justin and then Alan.

The game I have developed against daemons is that there are really 2 top builds – screamer star and plague drone star. Both of these lists have Fateweaver to ensure the stars stay alive against almost anything tarpitting their deathstars, while the other parts of the list go and take apart the rest of the army. They have high levels of psychic dice to control the psychic phase and create more units to score and contest objectives… Plus the big buffs from the Grimoire of True Names, Fateweaver, rerolls of 1’s for Tzeentch daemons and their malelific psychic powers. The new hot daemon list will become what Alan brought to Nova 2015 – the Seer Council with the Daemon base suggested above.

How I play against these lists is being able to hit their stars that are nearly unkillable with my star that is nearly unkillable and then jump out of combat to kill the rest of their army. Basically I have an army built similar to theirs but use close combat, hit and run, and superior mobility where they use psychic powers, shooting and some close combat.

Against Nick it was playing to the mission which was table quarters. I got second turn and had a massive advantage. Nick made an amazing play to trap my star before I split it into two smaller stars. Fortunately I was able to kill Fateweaver securing me the very tight win.

Q: Besides the game versus Nick who was your toughest opponent and how did your army neutralize them?

Alan was my toughest opponent besides Nick at Nova. The third toughest game was against Horton Doughton… He played an amazing Chaos Daemonkin list. Surprising? No as Daemons again go against all of 40k.

Q: What was the worst army for you to match up against versus your NOVA army?

My list was built to handle everything… Matchups and how tough a list is against another all depends on the mission.

I played against 2 double Demi Companies. Both of them were tough. Frankie Giampapa’s list was very tough – especially in table quarters. Julio Rodiquez also had a tough Demi list but the mission was better for me thus making it an easier matchup.

Q: I really like the NOVA FAQ this year – it mainly clarifies rules in an easy to understand format and I am using portions of it for my own GT. How do you feel playing RAW 40k straight out of the rulebook could or could not work for major tournaments?

I also liked the NOVA FAQ. I think it would be great to have the NOVA FAQ and the ITC used at all major and local events. Straight RAW is impossible. I also have run a GT for three years and you have to use a FAQ for the players because semantics are so subjective and players will never be able to agree on everything. When the last time GW sent an errata?

Q: Like you I am a big fan of terminators and have a vast collection of 30k Sons of Horus 1st Company including Horus. Terminators are very popular in 30k which I think is partly due to Grav weapons only being AP4 and they can have a natural 4++ invulnerable save. What in your opinion could be done to make terminators competitive again in 40k?

The best way to make terminators viable again in my opinion is to make them all two wound models such as Grey Knight Paladins for the same basic points or to allow for all terminators to have FNP as part of their normal stats. With base models getting cheaper it is just too many points to use a model that is slow and dies with rolling a one for its armor save or against Grav. The last problem with termies is that they need a transport or deepstrike… But you can’t assault out of deepstrike so that is an issue as well.

Q: Do you think GW will continue to release very powerful new codices or will this fall release possibly see a change or downplay of overall army strength?

GW will release whatever will sell more models and I believe the arms race is the way they will go. I can see TOs helping to balance this by lowering point levels and creating great balanced missions.

Q: I like what GW is doing with new formations and think these give players an alternative to deathstar builds and brings back some classic army styles. I see this as potentially increasing the longevity of the game and to a degree encouraging armies designed with background. What’s your take on this process?

I do like formations. The problem comes where older codex or formations mixed with new ones definitely help increase the lack of balance in the game. They do allow players to play with all of their toys.

Q: Coming back to the scene tournament what do you see as the future of competitive gaming?

I see the future as what the west coast guys at Front Line Gaming are doing. Making a competitive but fun event where the community has somewhat of a say in their FAQ and how their tournament will be run.

Q: And finally what would you like to discuss about 40k in general?

40k is a great game that brings people of similar interests together all over the world. I greatly wish the game can rebound to the loss of players that have exited over the last few years. If we don’t slow down the massive loss of players leaving we will end up like what happened to Warhammer Fantasy.

To wrap everything up here is Aaron’s deathstar army list…