Forgeworld latest tank is teased. When you fight a Space Marine Legion, you better watch the skies!

“While checking out the latest Leviathans in the Studio I also caught sight of a new Space Marine vehicle in development. It looks to me like an older pattern of Damocles Command Rhino for Legion armies, take a look…” 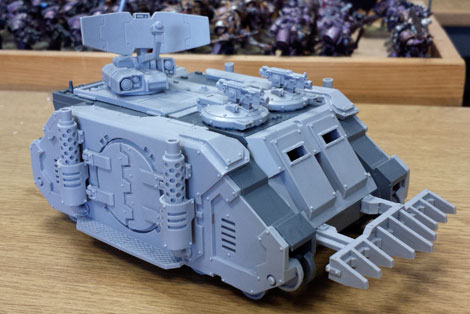 A bit of background for you unfamiliar with the vehicle: (via Lexicanum)

The Damocles is an example of the kind advanced technology available to the Space Marines. It is used only in operations where command and control of significant Space Marine formations is required, such as a battlegroup consisting of a Battle Company plus support elements. The Damocles provides a communications link between the Force Commander, his battlegroup and any air or orbital assets operating in the area. For this reason, the Damocles is rarely committed to front-line actions, and typically hidden away to prevent enemy interference.

In addition to the driver, the Damocles is crewed by a communications officer and a tactical officer. These Space Marines will have undergone additional training with the Chapter‘s Techmarines in order to operate the sophisticated technology. There is also room for the Force Commander next to the driver, allowing him the ability to keep updated on the developing situation.

The command vehicle is packed with some of the most advanced technology available to the Imperium. It mounts secure, multi-band communications gear that acts as a communications hub for the battlegroup, with signal boosters to allow ground-to-orbital comm-links, as well as the ability to communicate with other Imperial command units operating in the area. It can also monitor, intercept and decrypt enemy communications, which in addition to a multi-spectral auspex allows it to track enemy movements. Link-up with an orbital relay allows the Damocles to track individual squads and vehicles for an entire Chapter, as well as bio-status readouts provided directly by the Marines’ power armour. Finally, the Damocles includes a teleport homer, which produces a strong signal to allow for safer, more accurate teleportations.

In Horus Heresy games, the Damocles is available to any legions, but is more common to it’s creators, the Ultramarines.  It is an HQ choice and allows non-scatter depstrikes, improved reserves rolls, and can bring down a fairly nasty orbital bombardment.