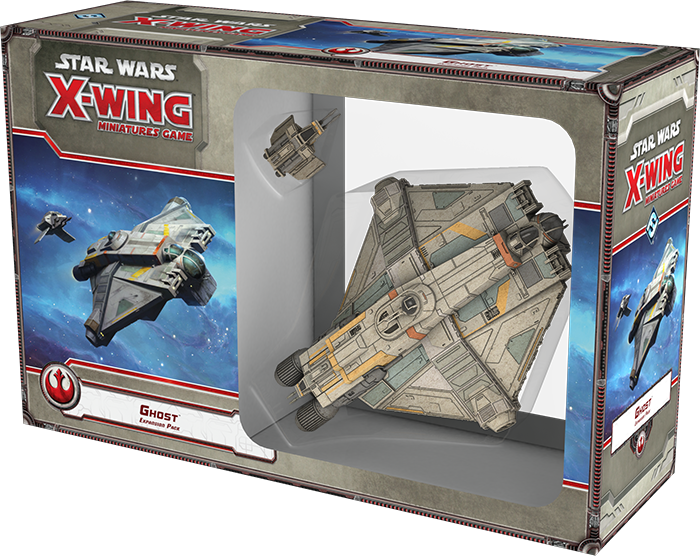 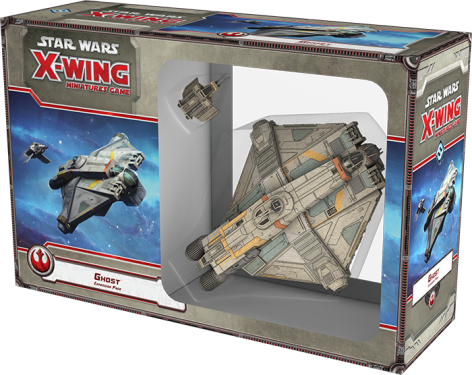 Let’s take a guided tour of the crew from the upcoming Ghost Expansion Pack for Star Wars: X-Wing!

Led by the Jedi survivor Kanan Jarrus and Hera Syndulla, the Twi’lek owner and pilot of the Ghost, the Lothal Rebels (also known as “the Spectres”) worked against the Empire primarily as a discrete Rebel cell. In addition to Kanan and Hera, they included explosives expert Sabine Wren, Astromech Droid “Chopper,” Lasat rebel Garazeb Orrelios, and Lothal orphan Ezra Bridger.

The Ghost Expansion Pack brings all six Spectres to life in X-Wing, but not just once. All six of these characters appear as both pilots and crew upgrades, and both versions come with game abilities to match their unique talents and personalities. 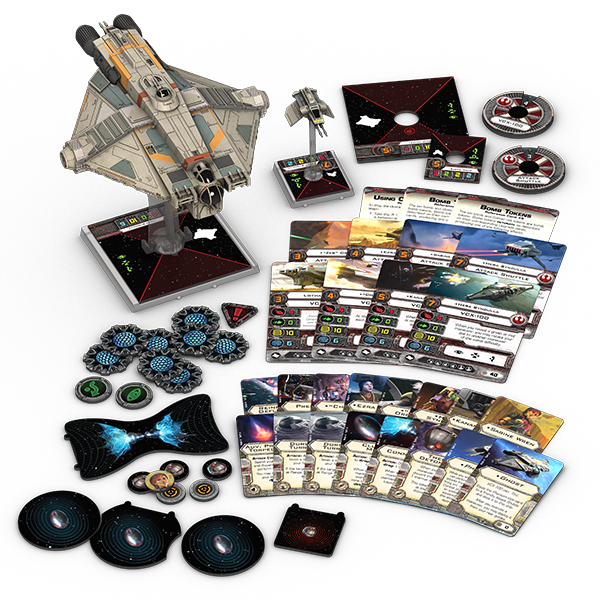 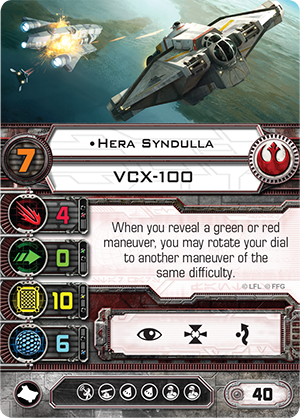 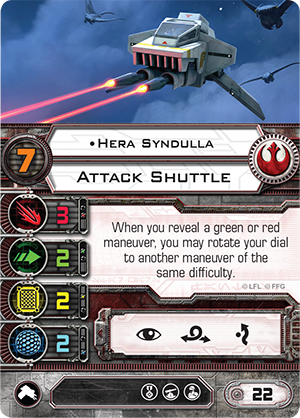 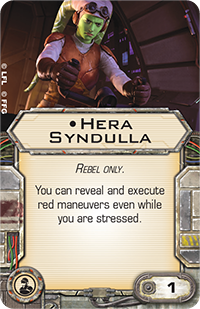 An extremely capable pilot whose talents amazed even Kanan Jarrus, Hera Syndulla was also quick to recognize and respond to threats. Accordingly, she brings the same, versatile pilot ability to both the VCX-100 and the attack shuttle:

“When you reveal a green or red maneuver, you may rotate your dial to another maneuver of the same difficulty.”

Given Hera’s relatively high pilot skill value of “7” and the many different red and green maneuvers on the VCX-100 and attack shuttle dials, her unique pilot ability presents you a fantastic measure of freedom to respond to other ships and their maneuvers. 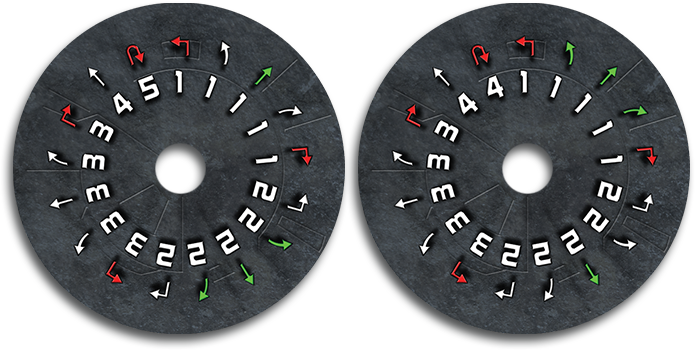 Because it ensures her ship’s entire maneuver dial is always available and, as a result, makes it harder for your opponent to anticipate your maneuver, Hera’s is a strong ability on its own, but it’s even stronger when taken in combination with the stess-based abilities granted by some of her fellow Spectres.

Outwardly cocky and quick to crack a joke, Kanan Jarrus makes his way to X-Wing as a crew card and as a pilot of the VCX-100. In both instances, Kanan’s influence is primarily calming and protective. 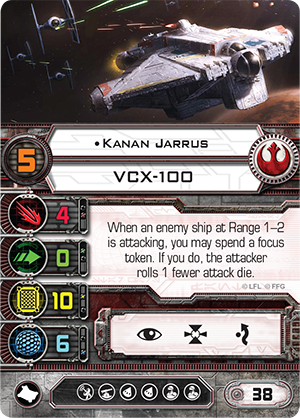 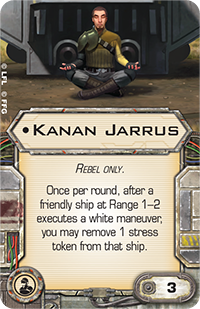 As a crew member, Kanan Jarrus can enhance his ship as well as any other friendly ships within Range “1-2.” Once per round, whenever such a ship executes a white maneuver, it can remove one stress token as though it had just completed a green maneuver.

Much like the Hera Syndulla crew upgrade, the Kanan Jarrus crew upgrade goes a long way toward opening the range of options to you on your maneuver dial. Unlike Hera Syndulla, Kanan Jarrus doesn’t expand your options by allowing you to reveal and execute maneuvers that you could not normally execute; after all, you can always reveal and execute white maneuvers. Instead, Kanan Jarrus opens your maneuver dial by allowing you to reveal white maneuvers on the turns you would normally need to reveal green maneuvers to clear your stress tokens and perform the actions you need.

The youngest and most recent addition to the crew of the Ghost, Ezra Bridger arrives to X-Wing as a pilot of the attack shuttle and as a crew upgrade. In both instances, he excels in moments of great stress, as his abilities allow him to rise to the occasion. 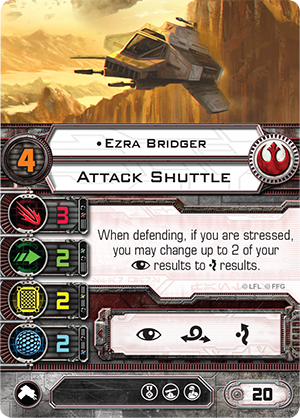 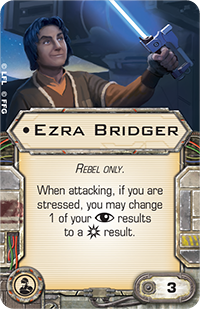 Of course, both versions of Ezra Bridger play well with Hera Syndulla and Kanan Jarrus.

Even when Ezra Bridger is stressed as the pilot of the attack shuttle, Hera Syndulla allows him to make full use of his maneuver dial, and while most pilots would normally race to remove their stress, Ezra Bridger is as safe while defending with stress as he is when he can perform actions. Simultaneously, you can equip Ezra Bridger with either Predator or the Wired elite pilot talent from The Force Awakens™ Core Set, in which case you can modify your dice on both the attack and on defense, all while flying about the battlefield with almost no regard to stress.

If, on the other hand, you choose to make Ezra Bridger a passenger aboard Hera Syndulla’s Ghost or Phantom, he can boost her attack potential on the turns she decides to execute a red maneuver. This is particularly useful because Hera finds more options for her unique pilot talent among either ship’s red maneuvers than among their green maneuvers, including the ever-useful Koiogran-turn. Moreover, if Hera uses Advanced Sensors to acquire a target lock before executing her maneuver, Ezra Bridger’s presence aboard her ship means that her attack will be almost as fully modified as if she were to attack with both a target lock and a focus token. The fact that Ezra allows her to perform such a potent attack after executing a red maneuver is a testament to his utility.

Mandalorian explosives expert Sabine Wren brings pilot and crew abilities to X-Wing that reflect two of her major interests—expressing herself creatively and blowing things up. 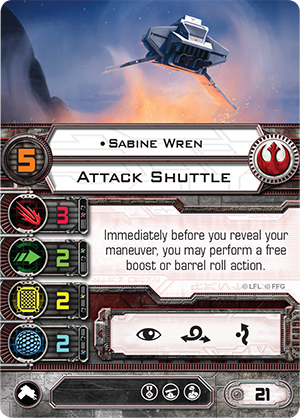 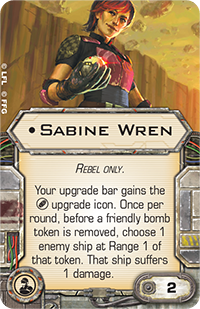 As a pilot of the attack shuttle, Sabine Wren flies by her own rules. Whenever she activates, immediately before she reveals her maneuver, Sabine Wren can perform a free boost or barrel roll action. Then, like any pilot, Sabine Wren can perform a normal action after she completes her maneuver. Still, the action advantage that her ability provides is just the beginning of its benefits; more importantly, it opens an additional action type and permits the execution of two key actions outside of the normal timing.

By permitting you to peform boost actions without the introduction of an Engine Upgrade , Sabine Wren’s ability greatly expands upon the attack shuttle’s already considerable maneuverability. Among other things, it allows her to turn her attack shuttle more sharply than her colleagues, especially since she performs her free boost before she executes her maneuver, meaning that she could boost and then perform a speed “1” turn in the same direction to turn her attack shuttle nearly one-hundred forty degrees.

A former member of the Lasan Honor Guard and a highly skilled combatant, Garazeb Orrelios witnessed the Empire’s devastation of his homeworld first-hand and was, therefore, typically eager for any chance to beat up Stormtroopers or other Imperials. Zeb was big, brash, and quick to anger, but he was also full of compassion for his friends and others who suffered under Imperial rule. 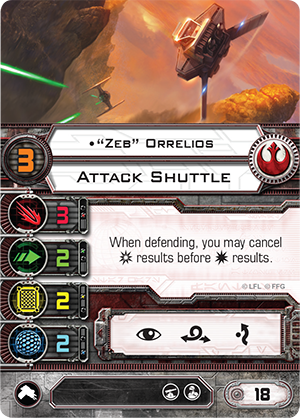 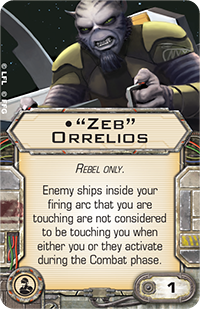 In X-Wing, the crew version of “Zeb” Orrelios continues to carry the fight to the Empire, even when his ship is touching an opponent’s. Although his wording technically leads to double-sided situations, in which neither his ship nor the ship that he’s targeting is considered to be touching the other during the Combat phase, partnering Zeb with a skillful pilot can make his ability a bit more one-sided and advantageous. For example, Hera Syndulla could adjust her maneuver to slam the Ghost into a Lambda-class Shuttle outside of its firing arc. Then, even though neither ship is considered to be touching the other, only the Ghost will be able to claim its shot.

The sixth and final crew member of the Ghost is the cantankerous astromech droid C1-10P, commonly known as “Chopper.” Ill-tempered and stubborn, Chopper was nonetheless loyal, heroic, and extremely capable. During his time aboard the Ghost, Chopper aided with everything from repairs and communications to gunnery. 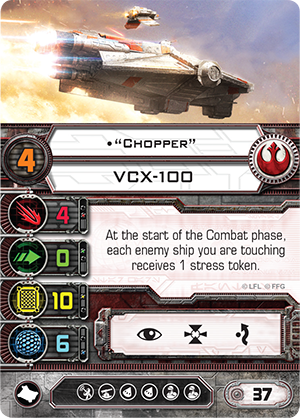 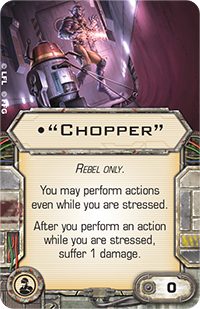 Chopper’s versatility comes to life in X-Wing largely through his crew card. As a crew upgrade, “Chopper” allows his ship to perform actions, even when it is stressed. However, his ability also comes at a cost; whenever you perform an action with his ship while it is stressed, “Chopper” forces it to suffer one damage. This means that Chopper’s is an ability you won’t want to use lightly, but when you decide it’s worth using, Chopper’s ability can easily prove the difference between life and death.

The Ghost Expansion is looking REALLY COOL! If you’d like to read even more about the unique abilities of the crew of the Ghost and how to use them, check out the full article from Fantasy Flight Games. Lots of really good info and tips in that one!

I’m also really impressed with how FFG has setup the crew of the Ghost to work with each other. I know I hate this word, but the “synergy” of the crew when paired with each other is undeniable. If you’re a fan of the show Star Wars: Rebels – you’ll be able to build a list based off the show and it will probably be a pretty solid list to run. I also don’t believe that’s by accident…kudos to Fantasy Flight Games for an awesome ship and an awesome expansion. I can’t wait to get my hands on one! I’m already milling around some dirty tricks with my boy Dash Rendar!

The Force Awakens in a few days, but Star Wars: Rebels is out NOW! It’s a good time to be a fan!

Author: Adam Harrison
Writer, Editor, Texas Native, and Austinite for 15+ years, Adam covers all things Tabletop Gaming. Which includes Warhammer 40,000, Age of Sigmar, D&D, Board Games and everything else that involves dice, boards, cards and a table. A hobbyist, player, and collector of miniatures and games, Adam's current obsession are his Death Armies for Age of Sigmar, his Blood Angels and Tyranids for 40k, and his ever growing Arkham Horror: The Card Game Collection.
Advertisement
FFG - Fantasy Flight Games Miniatures Star Wars X-Wing
Advertisement

Star Wars Armada: Getting Value From Your Upgrades