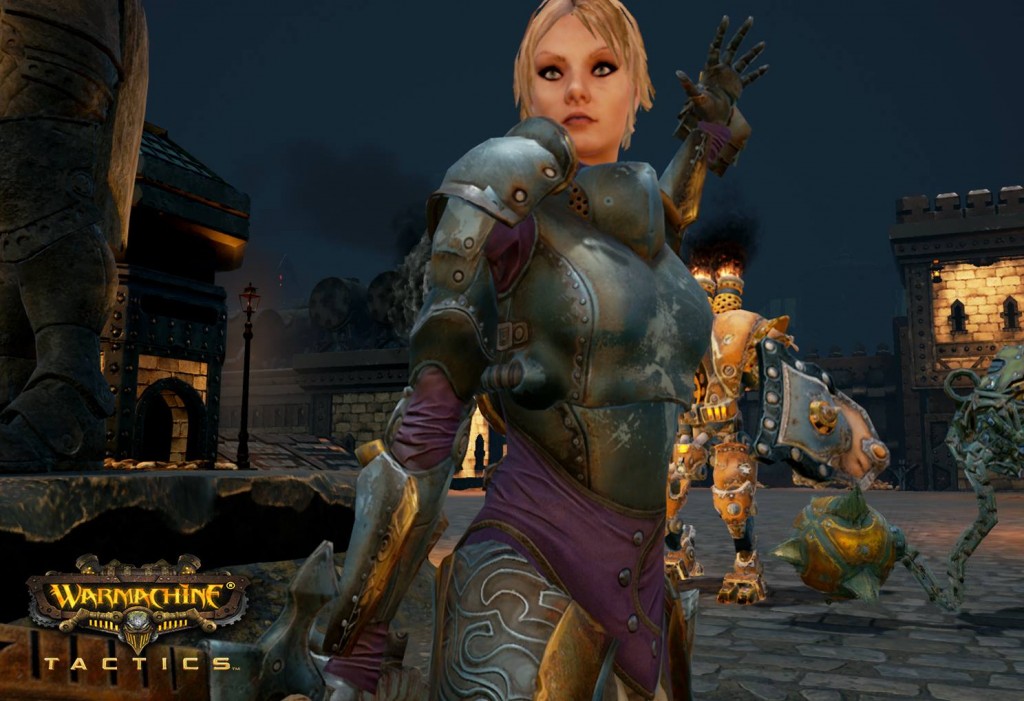 We are starting a new line of content here at WARMACHINE:Tactics, the first of these is the Warcaster Spotlight! We had the Development Team write up their in-sights and tactics for each of these Warcasters, which are coming out soon. This article on Mercenary Warcaster, Ashlynn D’Elyse. Daniel Larsen, Gameplay Engineer at Whitemoon Dreams, gives us an in-depth look at Ashlynn and her abilities.

Background: Before the occupation of Llael, Ashlynn grew up as a member of a noble family, receiving much training both at military academies and targeting ranges. During her adolescence, she was discovered as a Warcaster and started serving the nation. After her father was executed during the Khadoran invasion, she started doing freelance work in order to fund incursions against the Khadorans.

Ashlynn is a duelist-type character. This is seen through several aspects of her abilities, most notably her high Defense, the highest in the game, as well as some defensive passive abilities, and some impressively devastating offensive tricks. Her entire game plan revolves around sticking a pin in the wheel of the opponent’s plans and capitalizing on the mistakes caused thereby.

Abilities and Descriptions: Ashlynn has a ton of low-impact abilities, but combined they become much greater than the sum of their parts. First up, Advantages.

Gunfighter: Ashlynn can shoot while engaged or engaging.

Riposte: Whenever Ashlynn is missed by an enemy melee attack, if she is engaging that enemy, she strikes back.

Virtuoso: Ashlynn can make ranged as well as melee attacks during the same activation.

Quick Draw: The first time an enemy attacks Ashlynn with a ranged attack each round, Ashlynn shoots back. If she hits, her own shot deals no damage, and the enemy attack automatically misses her.

Admonition: Admonition is a 2-cost upkeep spell that can only target her Battlegroup. Whenever an enemy finishes its movement within 6 squares of the target, the target is immediately pushed back 3 squares.

Distraction: 2-cost offensive spell with Dispersal. Any enemy affected by Distraction suffers -2 MAT and DEF, and cannot make ranged attacks for a round.

Flashing Blade: Ashlynn pays one Focus and immediately performs a melee attack against all enemies she is engaging.

Twister: 2-cost offensive 6-damage nuke spell that leaves a cloud effect in play for a round.

Differences from tabletop: Like the other Warcasters in Tactics, Ashlynn isn’t much different from her tabletop counterpart. What is different though, is how she interacts with the game.  The fact that there are fewer units on the board, and the fact that they’re more resilient means she won’t be able to just walk up, cast Flashing Blade and basically have cleared an area of dudes. Veteran Ashlynn players will find they need to get a bit more cunning with their plays, while newcomers will most certainly find her an exciting challenge to master.

Suggested Tactics: Ashlynn has a whole slew of abilities that helps keep both her, and her army safe. Admonition should be plenty to keep Ashlyn safe from melee assassinations since she’ll always move away from the first unit coming to stab her. If you’re more scared about ranged assassinations, try throwing Quicken on her, putting her already respectable Defense of 5 all the way up to 7, which makes her very close to impossible to shoot. Combine that with Quick Draw, and you should be pretty safe against assassinations.

As for army support, Quicken can help you deliver any infantry to the fight quicker, or it can help you protect that one important solo, while Distraction can essentially shut down a whole flank of ranged infantry, or make the lives of a couple of ‘jacks very sad.

Whether you feel ready to dominate your opponent or if you need something to help you get back in the fight, a turn under Roulette, Ashlynn’s magnificent Feat will more than likely be able to do just that, as it just might result in you not losing anything for a turn, while your opponent weeps at how your stuff never misses.

This is a great breakdown and comparison for Warmachine: Tactics. Ashlynn D’Elyse is a cool Warcaster and it’s cool to see her get some attention on the digital battlefield. I also really appreciate that Whitemoon took the time to highlight some of the differences on the tabletop vs the video game – that really helps veteran players get a better idea of how Ashlynn works in Warmachine: Tactics.