This campaign will build over the next three months, including both narrative elements and the outcomes of your battles.

Deep in the Southern Lands of Mars, the Mariner Mountains stretch south from the border below San Dorado, linking up with the Imperial stronghold of Strathgordon and the dread Dark Citadel of Absolom. The Capitolian city of Shieldspar and the Mishiman capital on Mars, Hosokawa, are also in close proximity. Bauhaus have been consolidating their hold on their supposed research station in the area, and a new cohort of the Brotherhood are preparing to graduate from the Karkov Retreat and join the banners of veteran warriors that have flocked to the area. Cybertronic have been sighted, but where they are and what they are doing remains a mystery, as ever.

What has brought them to the area? Mineral wealth. Abandoned tunnels in the area, weakened by recent Mishiman drilling, have collapsed in a recent Marsquake. The scale of the geological collapse is unprecedented, and the whole area has dropped in elevation by several hundred metres. In the process, rich veins of rare and precious minerals have been exposed.

Normally such a bounty would require precision engineering, time-consuming tunnelling and incredibly expensive equipment to extract, but after the collapse, the whole area is one big open-cut mine, with mineral wealth just laying around, begging to be made into a profit. Of course, there used to be settlements in the area, but

Each of these factions stands poised to enter the warzone and take as much of the mining area for themselves as possible. Corporate and Brotherhood forces, normally somewhat restrained by the requirement that they not cause to much damage to useful assets and human capital, are free to act in any way they like– nobody and nothing would have survived the ‘quake and collapse.

However, it’s not just material goods that are up for grabs. A number of Brotherhood Mystics have come out with dire warnings about the area– those sent there risk their sanity and their humanity if they remain there for an extended time. They are intent on moving in and destroying structures they believe are creating or amplifying this effect, and will destroy any force that is in their way. The corporate armies have seen this behaviour and are aiming to remove the same structures, but they would be well guarded by the servants of the Dark Legion.

Now, it is up to you to choose… which faction will you support and help drive to victory? 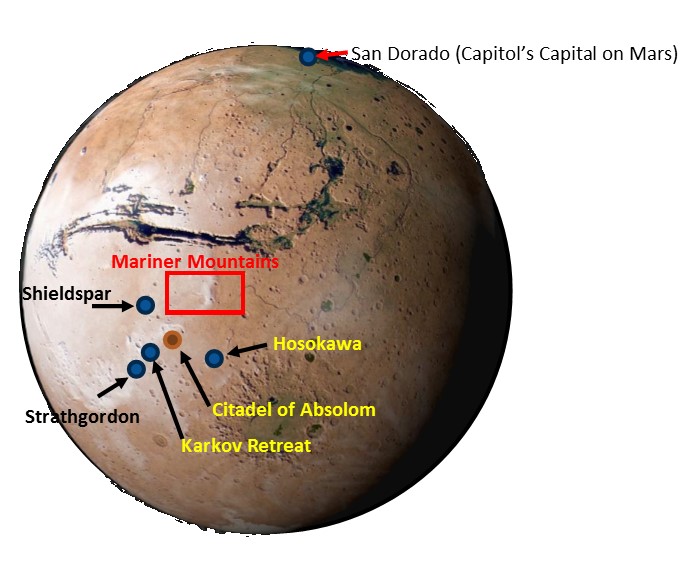 How the Campaign Works

In addition to the results of the last round each month and the details about the upcoming round’s mission and corporate agenda, the story will progress via excerpts in CTC Magazine. Note that this story has not yet been written– you will help decide how it turns out via your game results! 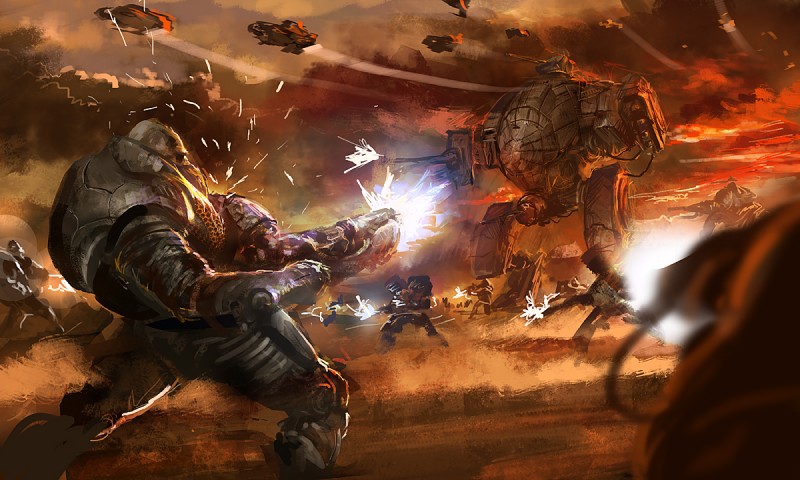 The Southern Lands on Mars is disputed territory. The more fertile north of the planet is a place where Capitol has a much firmer grip, but the higher-elevated southern regions are fought over by almost all of the major players in the Solar System.

The Mariner Mountains are one of the biggest potential flashpoints– there is an ongoing struggle between the Imperial fortress of Strathgordon and the fell Dark Citadel of Absalom, with battles fought several times a year. There is the Mishiman Mars capitol of Hosokawa, where the Lady Mariko holds her court and marshals her forces. There is the Captiol city Shieldspar, almost as militarised as the legendary city of Burroughs. There is the Karkov Retreat, with  serried ranks of Brotherhood military recruits marching out once their training is complete. Of course, Bauhaus and Cybertronic hold small assets across the region.

With the Marsquake and cave collapse, the geography of the region has significantly altered. Many settlements and installations in the area, particularly those that were on higher altitudes, have been completely destroyed. Underground facilities that Mishima engineers were building have collapsed. Underground mines are either sealed or collapsed.

The large areas of collapsed ground are a bounty of mineral wealth, but not likely to be very forgiving battlefields. Forces are likely to clash wherever they see strategic advantage– surviving settlements, dominating features, natural chokepoints, good landing zones, etc.

The area has been bounded into five sectors, chosen because of natural terrain features that dominate the area or prevent easy movement from one sector to another.

The military divisions of the corporations are likely to assign their forces into a single sector at a time, rather than trying for cross-sector raids.

Even if a corporation doesn’t have a pre-existing settlement or station in a sector, the will take advantage of the chaos to set up forward bases and seize what they can. 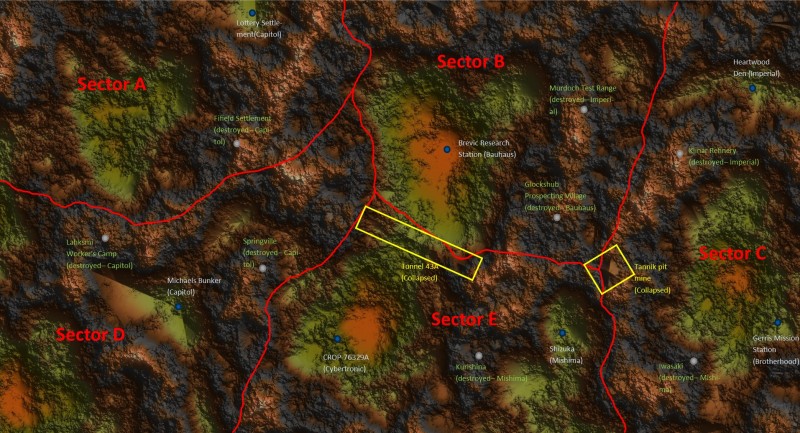 To register yourself as a player, just go to the event page and select your region! Don’t worry that you’re being asked to purchase a ticket, they’re free. You will need to record your order number from the ticket in order to record your results later.

Players that have obtained a ticket for the campaign can then play any game of Warzone: Resurrection and simply upload the results of that game (each player needs to upload results separately). The upload function will be handled by an online survey, and players can play and submit as many times as they like during the month– just complete the survey every time you play a game.. Players aren’t constrained to just one faction, either… although don’t get caught committing such treason. I hear they hang you for that.

The results of the games will be turned into a set of statistics, and these statistics will be used to drive the next phase of the narrative. Will a certain corporation gain the upper hand in a sector? Will that lead to increased efforts by their competitors?

In every round of the Southern Lands Campaign, there will be a new Primary and Corporate Agenda mission for you to play if you wish. Feel free to include one or the other into your normal games– for example, roll up a normal game of Warzone: Resurrection, but add in the campaign corporate agenda.

Completing the special mission(s) will earn you extra mission points when the calculations are made about winning factions. Plus, it’s a new and different mission for you to play and enjoy! 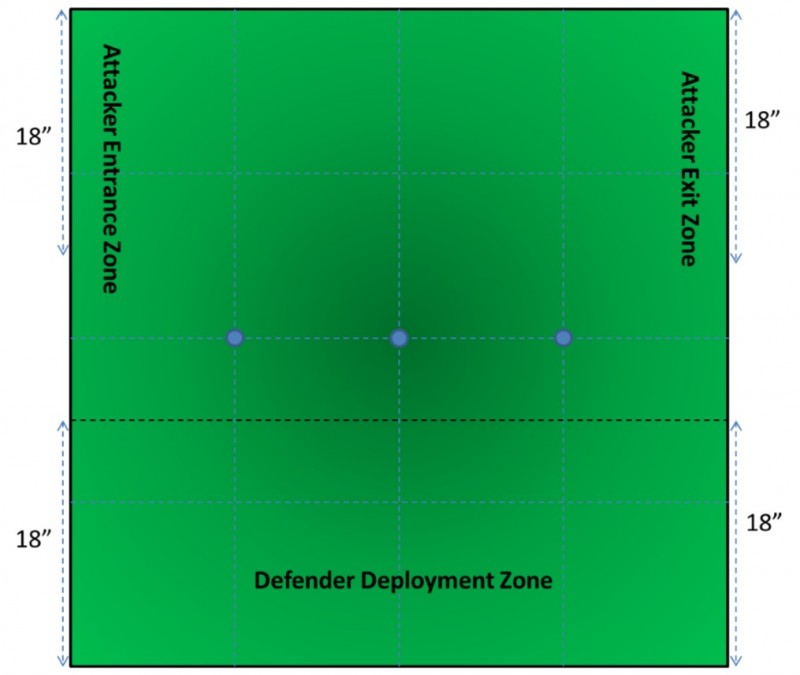 This mission pits a defending player against a quick and vicious attack by a fast-moving opponent. The attacker is the player with the initial initiative.

Objectives: three, placed as per the battlelines deployment. These objectives behave like the crates from the Supply Run mission.

Attacker Deployment: Escalation Deployment is used, but instead of rolling for table side, the Attacker’s forces enter play anywhere along the Attacker Entrance zone– either of the sides of the table, 18” in from the corner. The attacker can choose which table side is the entrance zone and which is the exit zone.

Defender Deployment: The Defender deploys the Warlord and all Troops models within the deployment zone– up to 18” in from their table edge. All of these models are pinned, even if Fearless, to represent their unready state. All squads must recover from pinning as normal before they can act. All of their Support, Lord and Vehicle/ Monster models are deployed via normal Escalation deployment, but the defending player only begins rolling for arrival in turn 2.

Attacker Win Condition: If the Attacker has taken two of the objectives and all of their surviving models have exited the board via the Attacker’s Exit zone (the opposite table side to the Entrance zone, 18” form the corner), they complete the Primary mission. If only one objective is removed from the table, or there are still friendly forces on the table at the end of the game, they claim partial completion of the mission.

Your force is attempting to spread fear and unease amongst the enemy. Kill everything you can see… just leave someone to tell the tale.

Players with this Corporate agenda score an additional 2 mission points for every squad of troop type models that is reduced to 1 member. Squads do not count if the surviving member is the original Squad Commander.

At the end of the campaign, Prodos Games will be handing out a GBP20 prize voucher for each sector, and an additional one for the members who are Crusaders.

These prizes will be randomly allocated to a player who posts the results from their games, so every time you play a game and post the results, you get another entry into the draw. Players will only be eligible to receive a maximum of one prize.

The draw will be conducted by a draw of all game results via random.org. The results will be posted on the CTC Facebook page and on the Prodos forum, and winners will be contacted via the email addresses they use for the Event registration page. 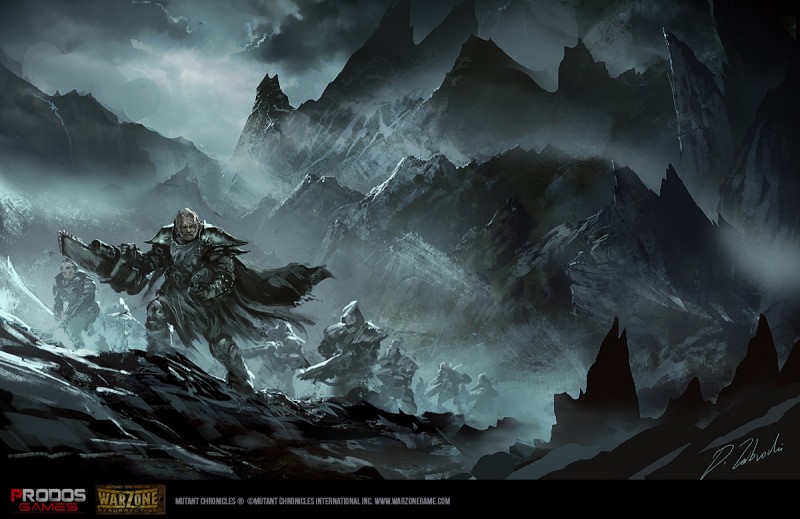 Just remember: how this campaign turns out is not yet written. It’s all down to you, our readers, playing games of Warzone: Resurrection and recording the results. Your success or failure on the battlefield will determine if your faction rises or falls within your sector!

If you’re interested in helping this campaign to attract new members, there are a number of things you can do. The first is to update your social media accounts with the profile and cover pictures that we supply along with this magazine. The second is to use the campaign hashtag, #MarinersFalling. Thirdly, you can comment on CTC Magazine’s Facebook page, and fourthly you can comment on the forum thread set up for this campaign.

If you have any questions regarding the campaign at any point, feel free to ask them on the Facebook page, forum thread or by emailing us at [email protected]. If there are questions being asked regularly, we will put them in next issue’s article on the campaign. Suggestions and stories are most welcome, too! If something quirky or interesting has happened on the battlefield, you never know, it might be enough for the media to take an interest.

Until next time, good luck out there!

Are you participating in the Southern Lands Campaign? What will you be using?