Are the New Wulfen Really as Good As Everyone is Saying?

The Space Wolves are coming. Checkout just how good the new Wulfen models really are, and what we may just see in the future META wise.

The new Wulfen models are on the way, but how good will they be in game? Here’s some of our thoughts from this week’s episode!

They already appeared to be better than 5 terminators armed with a Thunder Hammer / Storm Shield, (2+ save with no feel no pain vs 4+/5+ FNP equals the same math apparently?) and now I think this just puts them over the top for real.

Plus with a Storm Shield save versus non insta-kill attacks we’re talking a better over all survivability that just a stock terminator armed the same, and the Wulfen have TWO glorious wounds. Let’s put it this way: ever tried to kill off a squad of Khorne Flesh Hounds WITHOUT FNP, it’s actually harder than it seems. Well these guys have a better save, and FNP standard!

Curse of the Wulfen.
All non-vehicle models within 6″ is affected. For Blood/Sky/swift claws it is 12″, for Long Fangs it is 3″.
Wulfen, Servitors and units that starts in a transport are not affected.
At the start of the player turn, roll a single dice for all units. The effect lasts until your next player round.
Units outside of combat gains the Hunt tables effect, units in combat gains the Kill effect.
Hunt
1-3: re-rolls failed charges and… hammer of wrath
4-5: Add 3″ when you move, run or charge. Basically dunestrider.
6: All models gain Furios Charge and gains 1d3 attacks for charging, unless they have Rage.

Kill:
1-4: +1 initiative.
4-5: Re-rolls to wound.
6: If killed, you may attack before being removed, even if you already fought in an earlier Initiative step.

And now they get all these extra bonuses, plus what looks to be grenades that are offensive (shooting) and help in combat for 2 pts each?

I would say the Space Wolves are about to see a sharp rise in popularity between these new models and rules!

How Good Are the New Wulfen? – Long War Episode 36

Author: Robert B
Robert is a veteran tabletop and miniatures gamer, and writer with over 20 years of experience. His specialtiesies are the worlds of Game's Workshop's Warhammer. He began writing for BoLS In 2010.
Advertisement
Podcast Space Wolves Warhammer 40k
Advertisement

40K: The Mastodon is Ready for Action 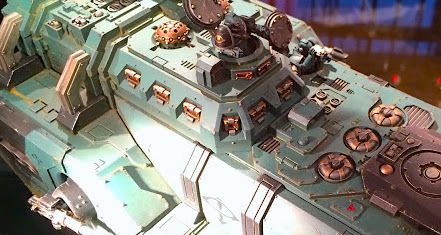