Hello again, in the second part of my review I will introduce you to the factions of Age of Tyrants and give you my opinion of the gameplay. 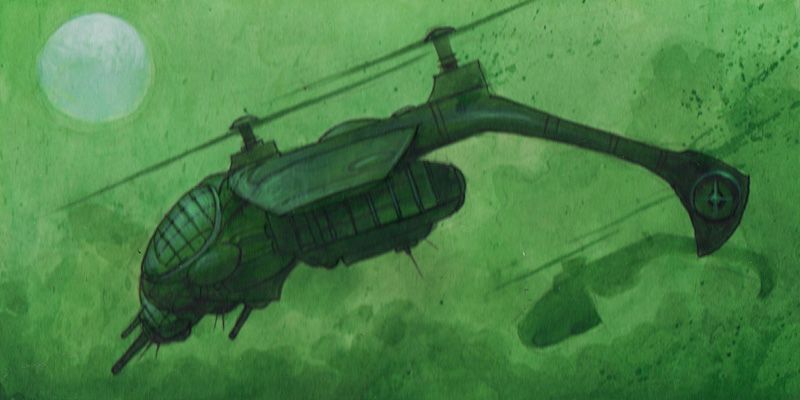 Each individual base has its own unit cards with all the stats you need to play. In Age of Tyrants, all units of a similar type share the same basic stats. This means that a transport always has the same size, same speed and point costs, and may even have the same damage values. At first glance this makes the factions less individual, but it also makes the game much easier to grasp. And in contrast to this, the specialist variants of these tanks are unique and support the playstyle of each faction: Junkers Exarchs are very good mid-range infantry hunters, Viridian Blades are dedicated tank hunters that trade the Bombard ability for a strong anti-materiel attack, Syntha Hades tanks have a long range as does the VASA Red Hammer, but the later sacrifices some anti-materiel firepower for better damage against infantry. Together with the platoon structures every faction feels unique and they are far from being interchangeable.

The Viridians are libertarian traders, and the oldest civilization in the Viridia system. They were at the forefront of space colonization and most of the other factions in the game directly descend from the Viridians. Nowadays they are specialized in food production (which is a great leverage for political power, too) and they prefer to live on fertile worlds covered in jungles, oceans or arable plains. 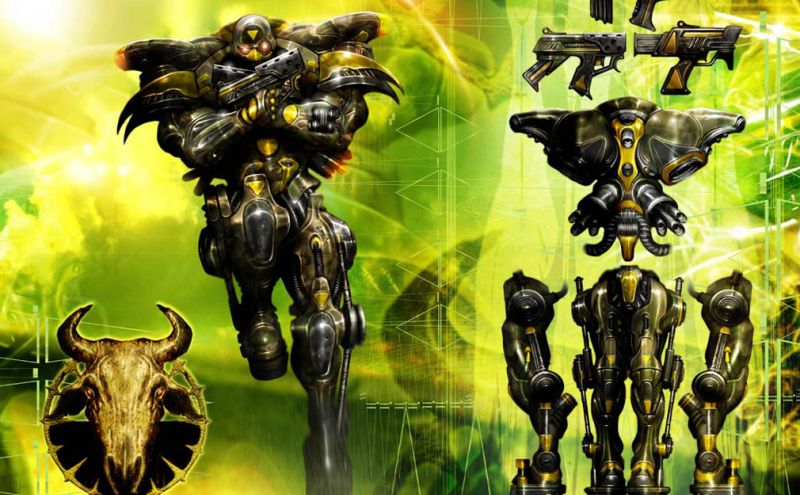 Interdict Marines are the elite of the Viridian military

In war, Viridian troops prefer long range combat. They are very well adapted to combined arms operations and their trademark weaponry is based on Gauss technology using electromagnetic accelerators.

Their platoons are organized in a rather traditional way, with a Lieutenant in a transport vehicle, two squads of Colonial Marines either specialized in fighting infantry or tanks and a Sniper element. 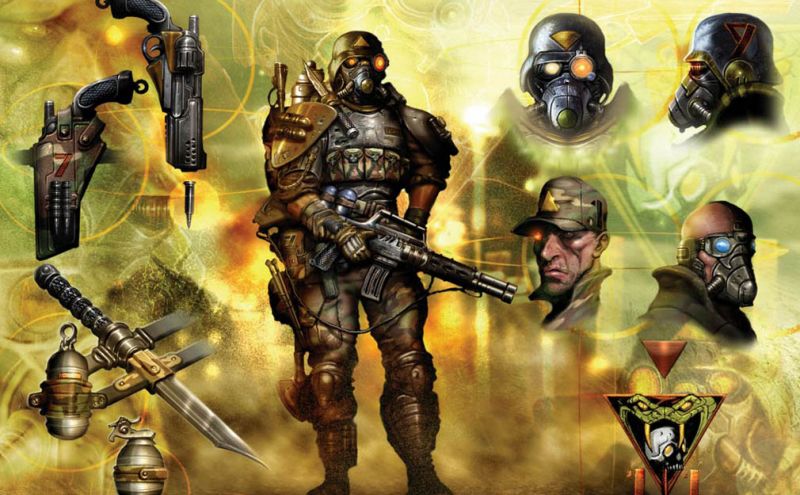 Kolonial Marines fill the ranks of the Viridian infantry

Additionally they can field the Viridian Defense Forces who are the local army of each planet.

Their elite troops are the Interdict Marines, who are equipped with jump-capable power armor. Viridian tanks and transports are tracked vehicles with heavy Gauss weapons, either designed for rapid fire or for maximum penetration.

Viridian units are more effective at greater distance and their sniper teams are the only non-Syntha infantry unit that can touch targets further than 25“ away. 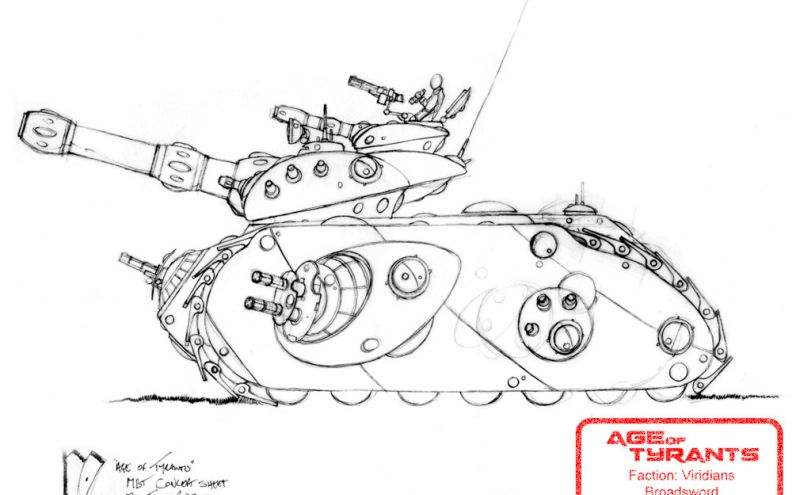 The Junkers are the inhabitants of a former penal colony, and they still consider lives as cheap and might as right. Recently they developed some major hunger for expansion and their vast legions threaten the settlements of the other factions. They prefer the worlds no one else wants, like deserts or wastelands, and they take what they need from their richer neighbors, making good use of looted and scavenged technologies. 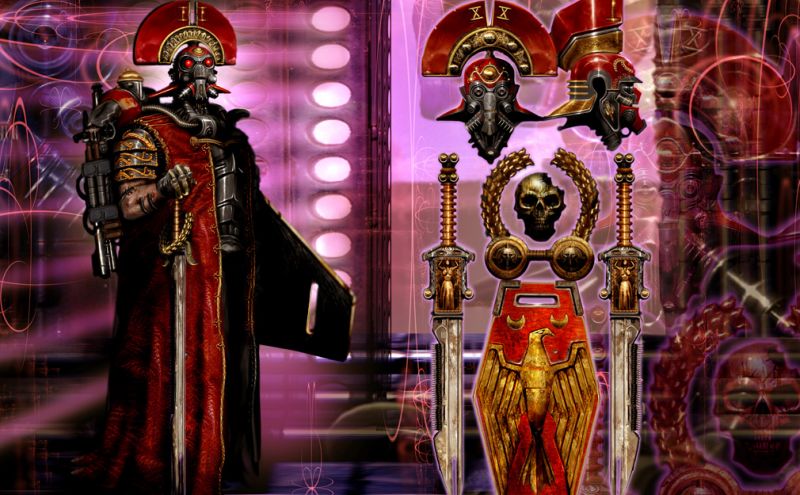 Junker troops excel at short-range and usually rely on numbers to balance their sub-standard equipment. A standard Junker tactic is to pound the enemy with artillery and then bury him in bodies. They field the largest infantry squads which are armed with shotguns, ballistic shields and flamethrowers. Junkers are the only faction with organic platoon-level artillery support and their elite Allecti Exo Suits are on par with other Special Forces units. Junkers prefer wheeled vehicles and their uncanny love for fire is also reflected in their artillery: The Draco fires large incendiary rockets. 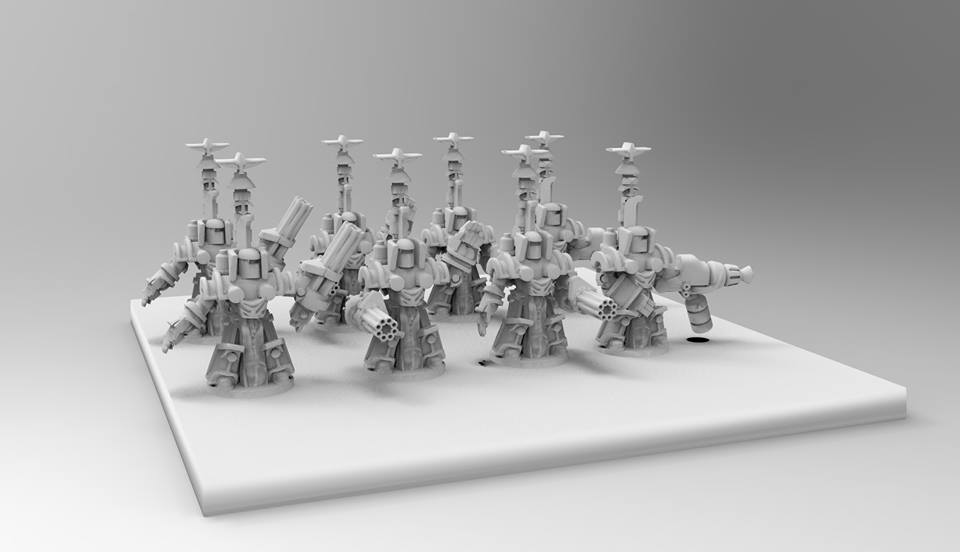 Allecti Exo Suits are reserved for convicts that served their sentences, distinguished themselves in battle and remained in the legion as free men

Junkers bases deal more damage at short range and their elite Allecti units is the only non-Syntha infantry unit with a suppression resistance of 4.

Unleash Hell is a special order that allows artilery to perform two Bombardments with just one order and Meatgrinderis the same as Parting Shots. 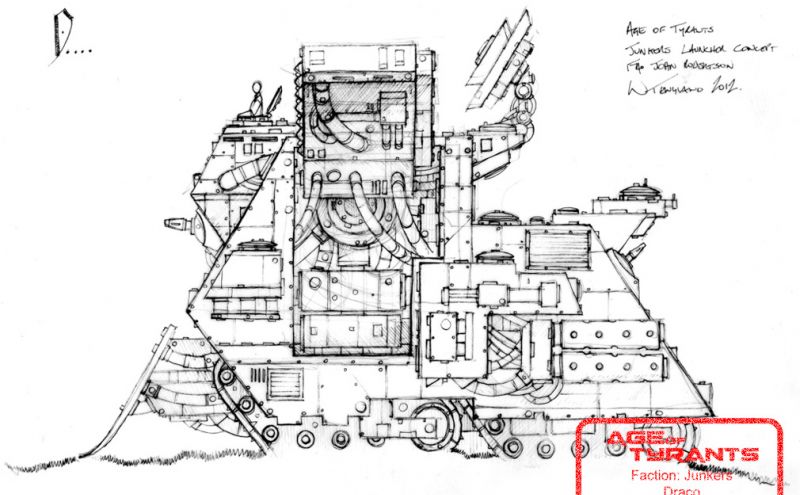 VASA was originally created to oversee the Tripartite pact between Viridian, Junkers and Syntha, and they still consider themselves to be a peace-keeping force. Their headquarters is on the ice world Vacillus, and they have several outposts controlling traffic and trade throughout the system.

The Ikon is the main battle tank of the VASA Protectorate

Their technology is centered on faster than light travel and rapid colonization, and their weapons and equipment are of the latest designs.

As a police force their platoons are trained for rapid deployment and suppression, and usually lead by an officer in a main battle tank. If this is not sufficient to handle a situation they can call in the elite Black Legion, units in power armor with deadly Ion Lances. 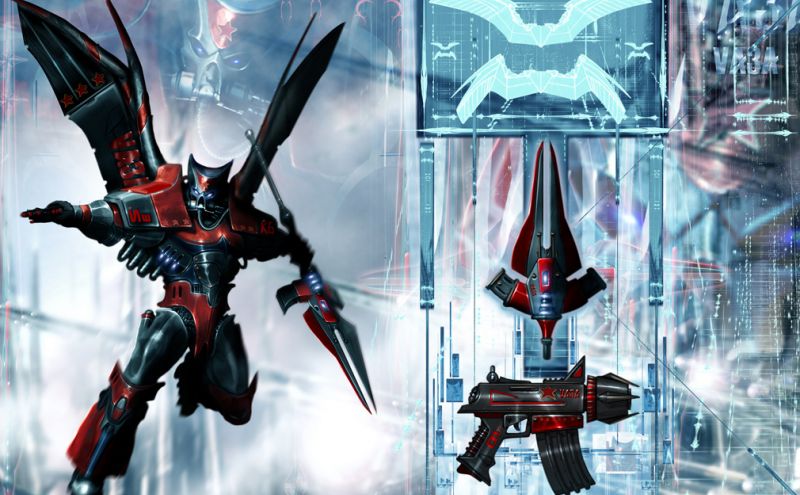 There are few things the Black Legion cannot handle

In game terms, VASA are the allrounders with stable combat stats and the ability to deal constant damage over all range bands. They have the lowest supprression resistance of all armies, too.

Their special rules are Fussilade, the same as Meatgrinder and Parting Shots,  and Tank Desant, which allows infantry to be transported as tank riders on any kind of vehicle. 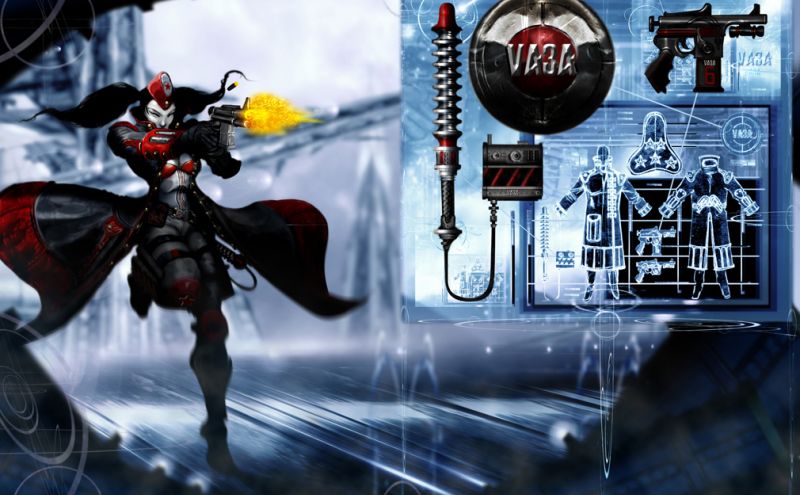 Suppressor units are called in to deal with local unrest

The Syntha are a highly technological collective society, a concept so alien to others that some doubt that the Syntha are still fully human. In fact, Syntha citizens are not born, but created through genetical and cybernetical processes. 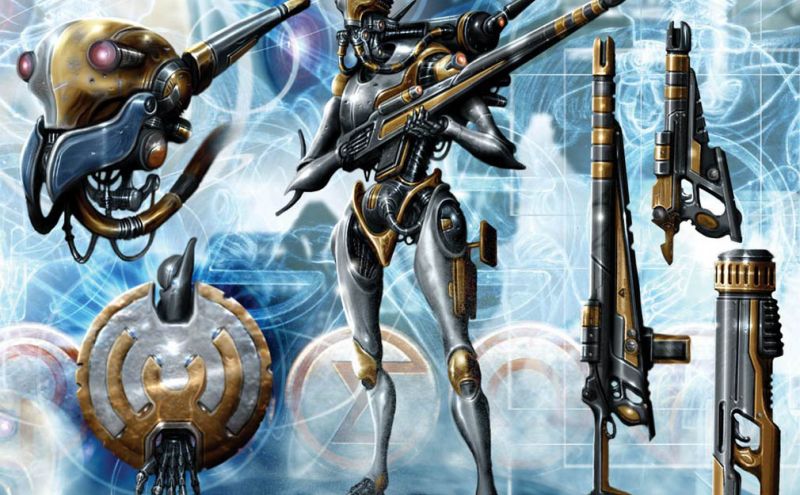 Androsynths are the backbone of all Syntha forces

The Syntha have the monopoly on Prime Obsidian, a substance that allows the development of advanced AI and other technological miracles. Syntha expansion is driven by scientific instead of economic reasons and leads them to uninhabitable worlds more often than not. In these cases, robotic miners will construct vast underground complexes providing everything the colony needs.

Because they are the smallest faction in the Viridia system, they highly depend on robotic forces in warfare. This limits the loss of human lives and makes Syntha troops immune to psychological effects, but the lack of initiative makes their armies harder to control and to coordinate.

Therefore, Syntha are not as adapted to combined arms warfare as the other factions. Their platoons have clear functions: Point Cells for assaults, Tactical Cells to fight infantry and larger Teratosynths and M-Synth walker for fire support.

Their vehicles all make use of anti-grav technology and are armed with lethal plasma weapons or autonomous hunter/killer-drones. 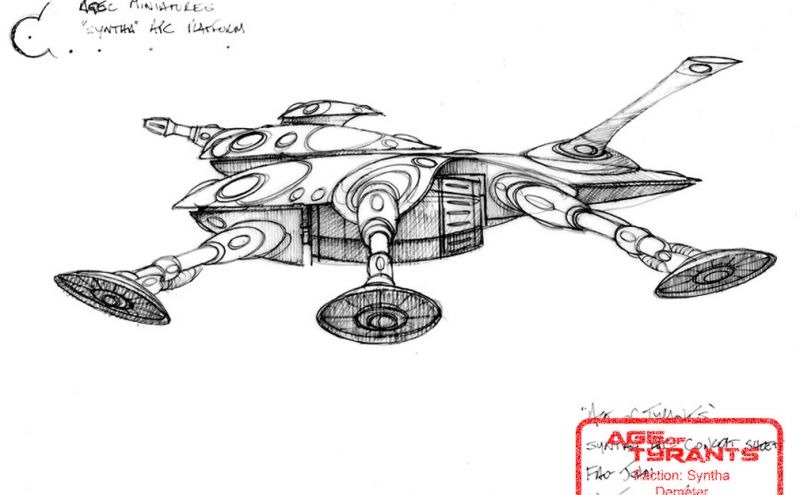 Of all factions, Syntha has the most units that can fire over 25“ and they have the most units with the Bombard special rule. They also have the highest suppression resistance. Additionally, Syntha units are controlled by a special tactical network called SPOMM. That means that their leaders only have a poo of 3 commnad pints instead of 4, but they do not suffer the additional command point costs due to suppression!

Syntha special orders are Multiple Target Acquisition, the same as Meatgrinder / Fussilade / Parting Shots, and Sync Fire, which gives an additional  +1 attack modifier for each base supporting an attack.

How does it play?

(Disclaimer: We played our games with an earlier version of the rules. But I don’t think the recent changes affect my opinion at all)

I was impressed by how easy Age of Tyrants plays. The rules seem to be complex while reading through them, but during the game you realize that they are very intuitive. The way the rules work just feels right and after a couple of turns all we needed was the unit stats and the combat score table. Despite that, Age of Tyrant is still quite a brainteaser. If you attack in the wrong place at the wrong time, you will do no significant damage, but it may very well leave your platoon in a bad position. The focus on combined arms tactics is not just a marketing tool, if you don’t use your assets in a coordinated attack, you will be first outmaneuvered and then locally outgunned by your opponent. It feels a bit odd that all units can take the same amount of damage, but the different suppression resistance values compensate for that. There are no glass cannons and no „don’t tickle me with your peashooters“ armor monsters in this game. But once you got your head around the fact that every attack is actually an extended firefight it starts to make a lot of sense again.

All in all, Age of Tyrants is an excellent large scale system with a fresh setting and a lot of potential for the future.

Join me next time when I will interview one of the developers of the game!