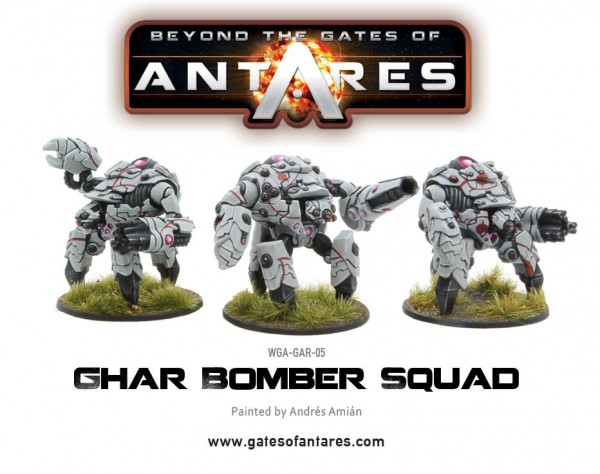 The Ghar are back and they are bringing in the heavy hitters! Check out the latest for Beyond the Gates of Antares!

I’m excited because my favorite GoA faction is getting new toys – and who doesn’t like getting more kits?! The Bomber Squad and Command Crawler are both in stores now!

We’ve some Ghar-tastic releases available today to expand your conquest of Antarean space. Here are the new plastic Bomber Squad and the superbly detailed (and huge!) resin and metal Command Crawler: The Ghar live only to destroy lesser humans, and will not rest until they finally prevail over a universe emptied of all that verminous race. They were created in ages past – even they do not know when or why – and whoever engineered them eradicated all traces of pity and compassion from their being. Out of their armoured suits they are scrawny and wretched things, but once encased in battle armour, attached to their suit’s control by neural plugs driven into their spines, they are transformed into the ultimate warriors!

The Disruptor Bomber Squad is built around Ghar armed with a deadly Disrupter Bomber accompanied by Ghar armed with Scourer Cannons to protect the squad from attack. The Disruptor Bomber is a primitive launcher use a plasma/steam mix to lob a disrupter bomb into the air and on top of the enemy. Disruptor bombs release a powerful quantum gravity blast when they explode. This tears apart physical matter, wreaking havoc with sophisticated nano-based technologies, and creating residual spacial distortion that can often render battlefields uninhabitable for years. The Ghar are a race bred for battle and physically adapted to fight from within their sinister armoured battle suits and other potent machines of war. The most important Ghar leaders direct their forces from multi-legged Command Crawlers, substantially armed and armoured machines that serve as mobile command-posts in the midst of battle. Like all Ghar machinery the Command Crawler is a primitive affair compared to the superior technologies of Antarean space, though it is highly effective for all that. Its power comes from a volatile plasma reactor that spews forth dangerous radiation, endangering friend and foe alike. The Ghar are little concerned with such trivial perils for they have little fear of death – only of failure The Crawler’s primary role is to allow its Commander to direct battlefield operations from behind the safety of the vehicle’s heavy metallic armoured shells and ancillary magnetic shielding that protects the open crew compartments. Ghar communications systems are uncertain, not least due to radiation from the plasma reactor, and often Commanders find themselves caught up in the fighting. The Command Crawler is heavily armed, carrying two Scourer Cannons each capable of shooting concentrated bursts of plasma at armoured enemies, scattering plasma widely over dispersed targets, and shooting space-warping disruptor bombs using super-heated steam generated by mixing water with raw plasma. The Ghar support force would be an excellent choice as it combines both the Command Crawler and Bombers into one complete set, and as a bonus comes with one extra plastic Bomber and more Outcasts to bolster your Ghar army! Anyone else getting their Ghar Empire Forces together? I’m working on a pair of units myself. Now I’ve just got to get them painted up and start playing!

Ghar Empire: All Your Bases…Yeah you know who they belong to.