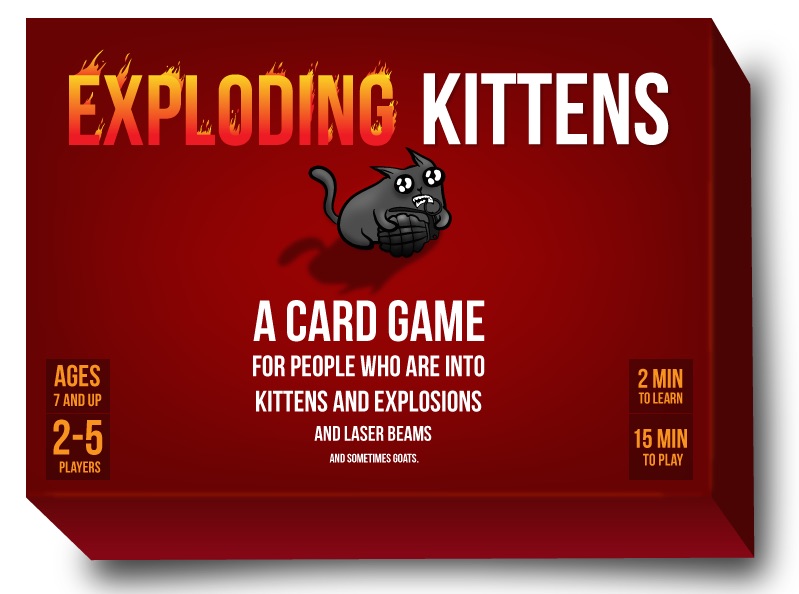 The Tabletop Spotlight is on Exploding Kittens – A Card Game!

Hey BoLS Readers – Do you have a love of kittens? What about Bomb Defusing? I’m assuming that’s a very strange intersection of a vin-diagram out there…But my friends over at Dragon’s Lair Comics & Fantasy assured me there is more to this game than just those two things. And they were right! Mostly…

If you’re not familiar with Exploding Kittens, it was one of the most successful Kickstarters of all-time! It currently holds the record for the most number of backers AND the most funded game in Kickstarter history. So if you didn’t know that, I’m guessing you weren’t a part of the kickstarter campaign…But that doesn’t mean you have skip out of the fun. This game is super easy to get into because all you need is this box and a few friends.

The game play is simple. Draw a card – if it’s an Exploding Kitten YOU LOSE – unless you have a diffuse card. You can then play the other types of cards to mess with the other players. Some let you trade cards, some let you re-arrage the deck. Some let you attack or defend. While this game is really silly on the surface it can get down right vicious! The longer you play the better your odds are of drawing an exploding kitten. Needless to say, the game goes pretty quick.

The art work is great – The Oatmeal is responsible for the Writing/Illustrations if you were thinking those cats look familiar. There is also a NSFW version of this game that has some more “adult” themes. But overall this game is perfect to have around for any of your “non-gamer” friends & family. Plus the standard version is kid safe…well as kid safe as a game that features exploding kittens can be, right? I’ve played this game with friends and complete strangers – it’s a lot of fun so go check it out! 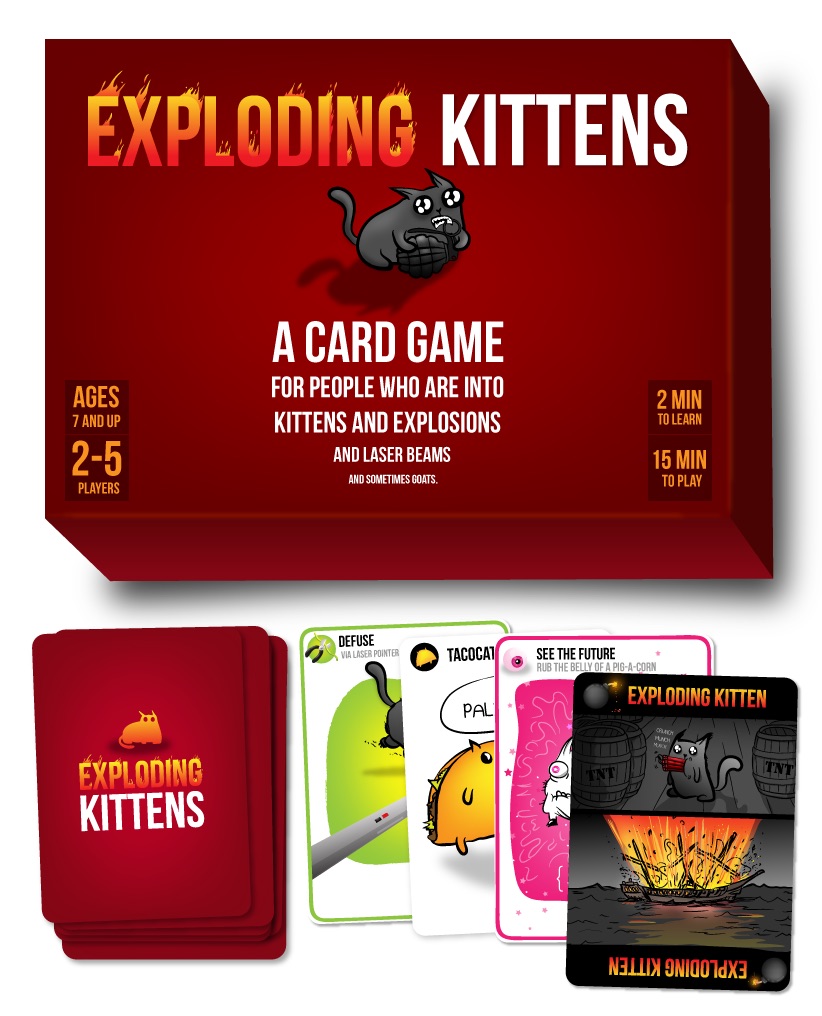 Created by Elan Lee (Xbox, ARGs), Matthew Inman (The Oatmeal), and Shane Small (Xbox, Marvel), Exploding Kittens made history when it became the most-backed game in Kickstarter history and the campaign with the most number of backers, ever.

It is a highly-strategic, kitty-powered version of Russian Roulette. Players draw cards until someone draws an Exploding Kitten, at which point they explode, they are dead, and they are out of the game — unless that player has a Defuse card, which can defuse the kitten using things like laser pointers, belly rubs, and catnip sandwiches. All of the other cards in the deck are used to move, mitigate, or avoid the Exploding Kittens.

Author: Adam Harrison
Writer, Editor, Texas Native, and Austinite for 15+ years, Adam covers all things Tabletop Gaming. Which includes Warhammer 40,000, Age of Sigmar, D&D, Board Games and everything else that involves dice, boards, cards and a table. A hobbyist, player, and collector of miniatures and games, Adam's current obsession are his Death Armies for Age of Sigmar, his Blood Angels and Tyranids for 40k, and his ever growing Arkham Horror: The Card Game Collection.
Advertisement
Card Games Kickstarter Tabletop Spotlight Videos
Advertisement