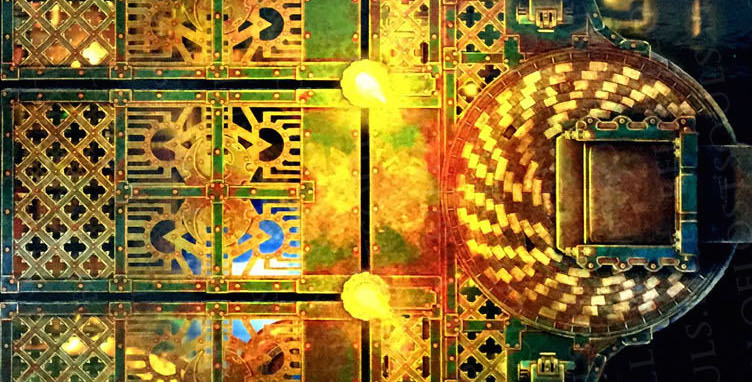 Deathwatch: Overkill is only days away! Today we look at the rulebook and what this game is all about.

Today we wade into Deathwatch Overkill rulebook and see what makes this game tick.  Let’s get started!

Special note: These are all high resolution images, click to see all the details.

The rulebook is a 48 page affair, full color with a lot of artwork (much taken from the Black Library Deathwatch series), full game rules, a 9 mission narrative campaign, and a small background section to give newcomers some basics on the grimdark forces involded. Here is just a small sample: 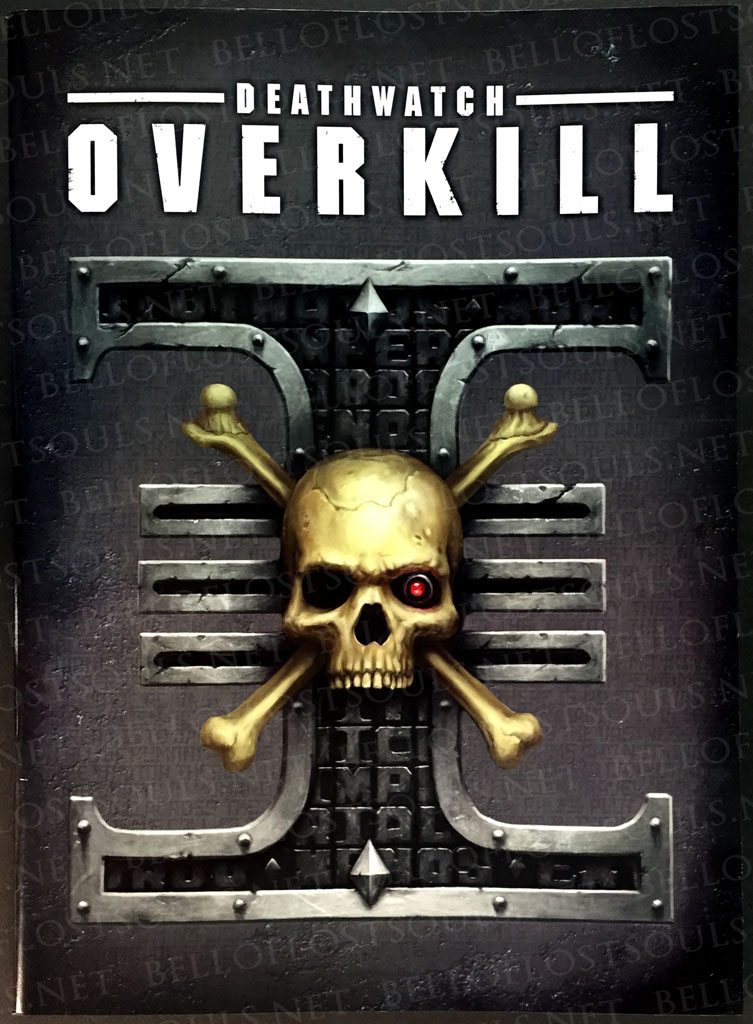 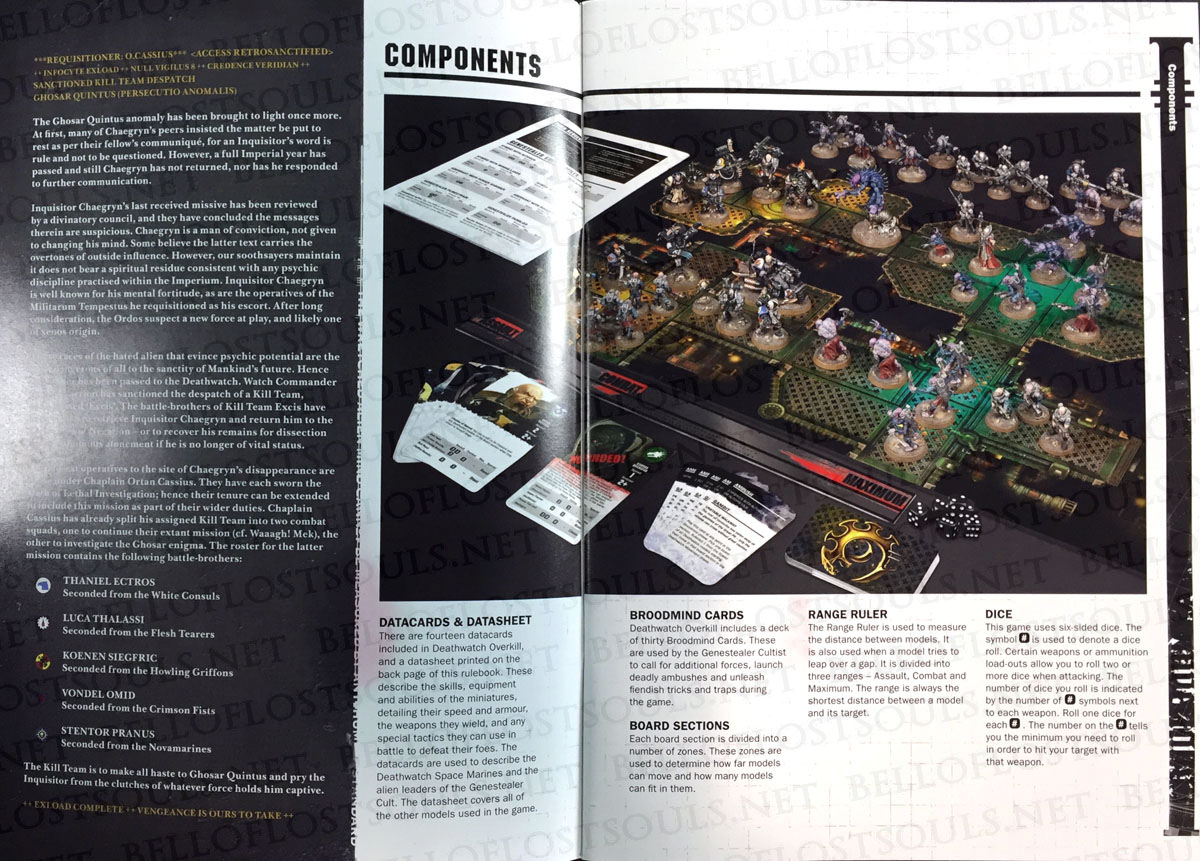 Here we see the full components laid out with descriptions of each.  On the black sections of the rulebook we get the fluff side of things.  Here we can read of the mysterious fate of the Inquisitor and the first Deathwatch Killteam sent to Ghosar Quintus. 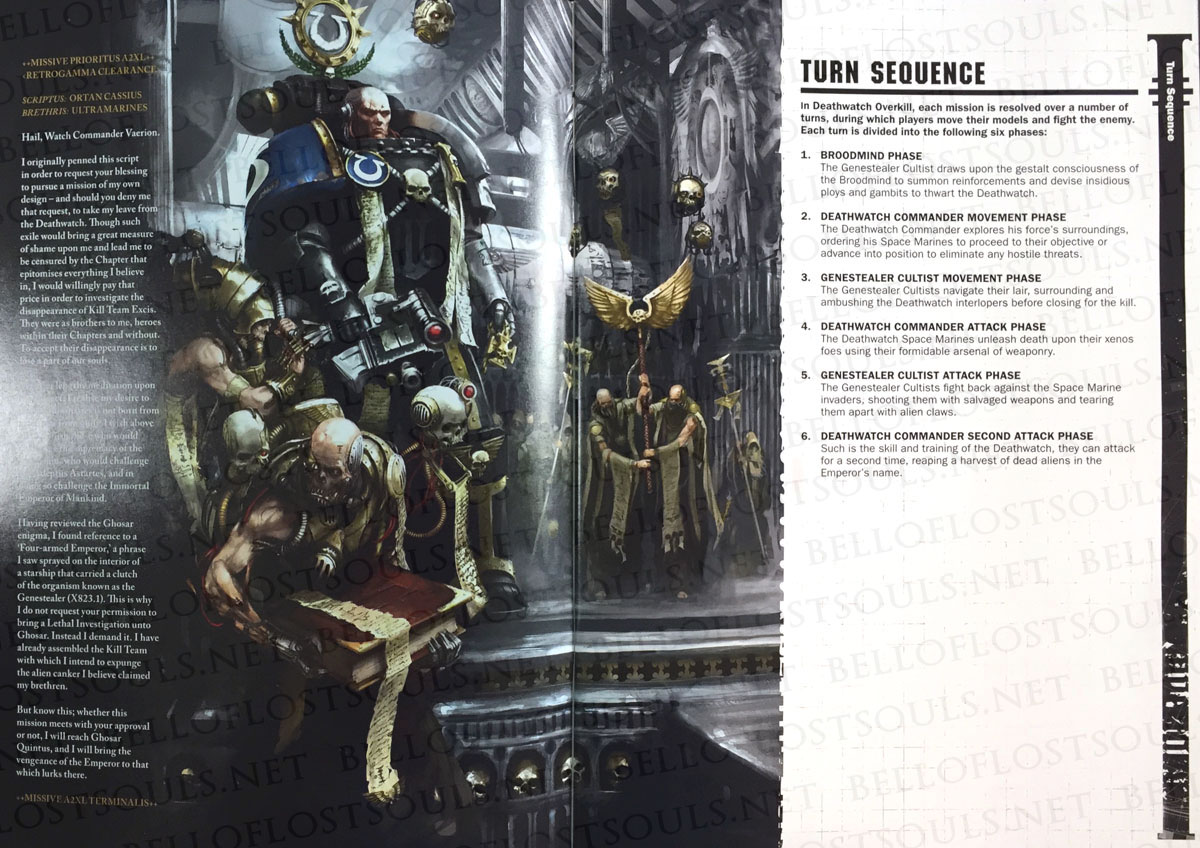 Digging into the rules, you can begin to see some of the overall asymetrical balance and tone of this game.  Note the 6 phases of the game turn.  In particular, note the TWO Deathwatch Attack Phases.  The Deathwatch player will be weilding absolute killing machines in this game, but the Genestealer Cult player has unlimited (and fast regenerating resources). 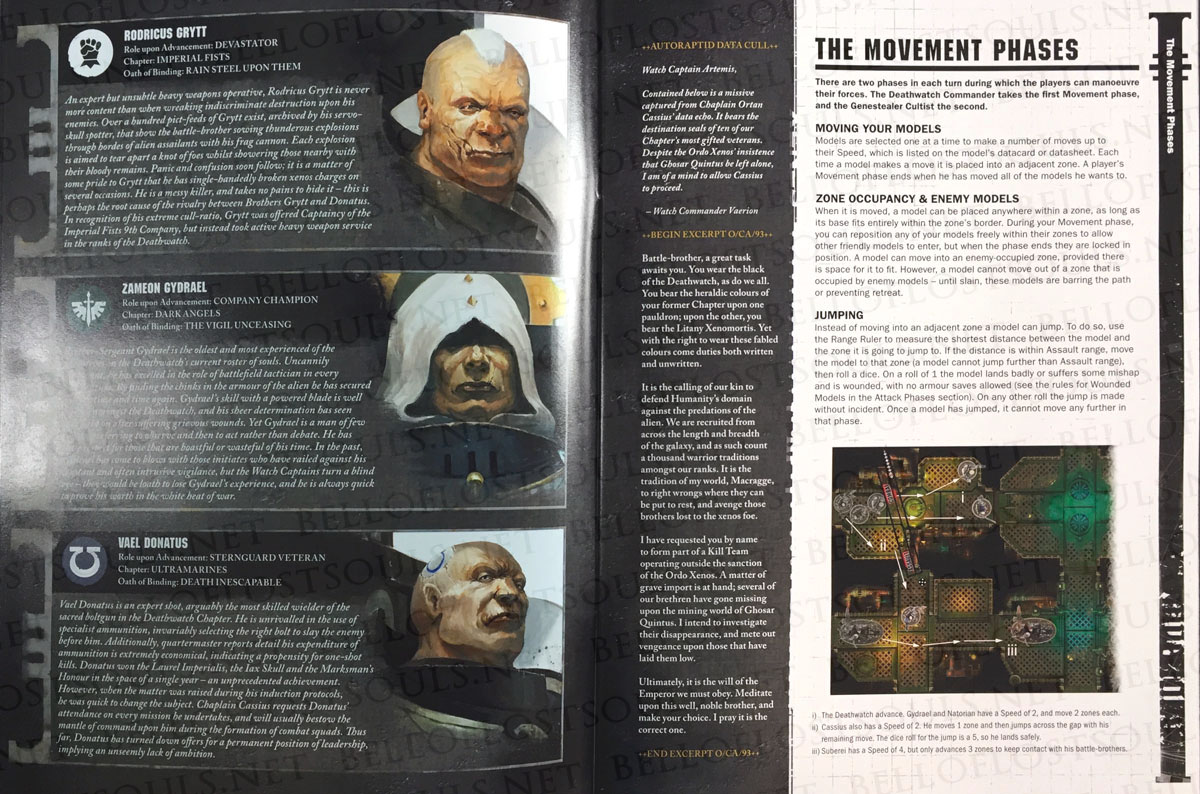 Now er move onto movement.  There is no inches or centimeters in this game. You are limited by the number of “zones” you can travel in a turn. MOdels have a move stat of between 1 (the hulking Salamander Terminator), to 4 (the motorcycle equipped White Scar).  There is also the option to jump across the black “abyss” areas of the board if they are somewhat close together – but don’t fall… A big differentiating feature from Space Hulk. 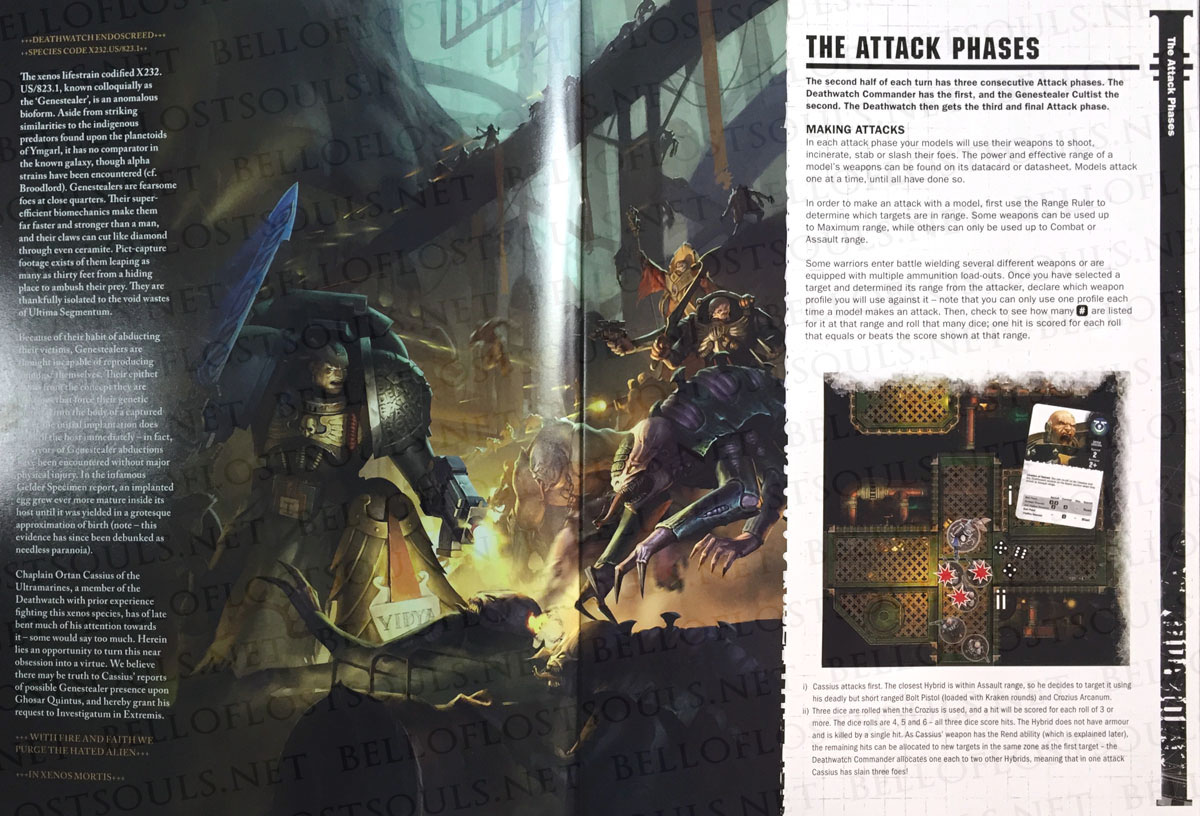 Here we see the basics of rolling attack dice, making saves and removing models. You will rarely if ever need to roll more than 3 dice at a time.  No need for new players to have to rush out and buy boxes of chessex dice for this game. More importantly we also get some sexy artwork of that Blood Raven Librarian in a tight spot! 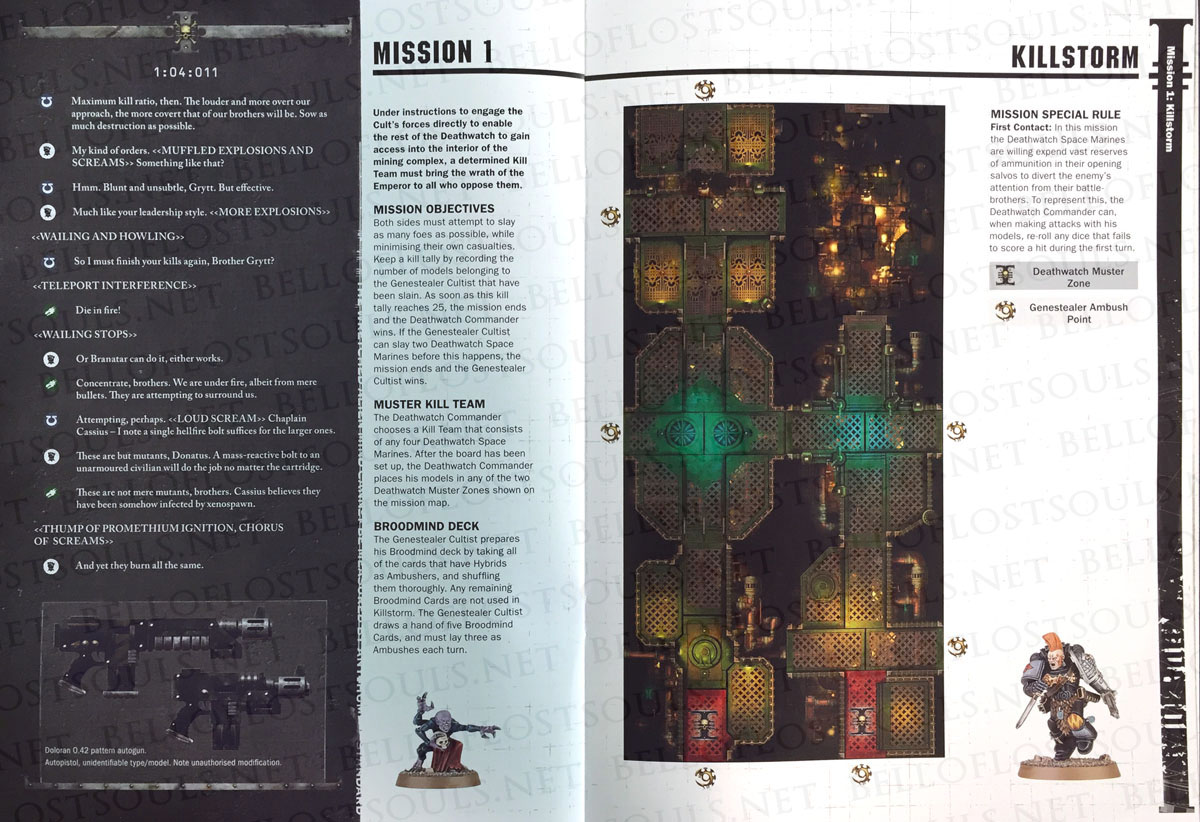 A sample mission.  Players of Space Hulk will feel right at home. We have a map, initial start positions for the Deathwatch, entry areas for Genestealer Cult models, objectives and special rules.  Note that in this mission you have 4 Deathwatch models who need to kill 25 models to win.  The Genestealer Cult player must kill 2 Marines before this happens to win.  It’s that kind of game! 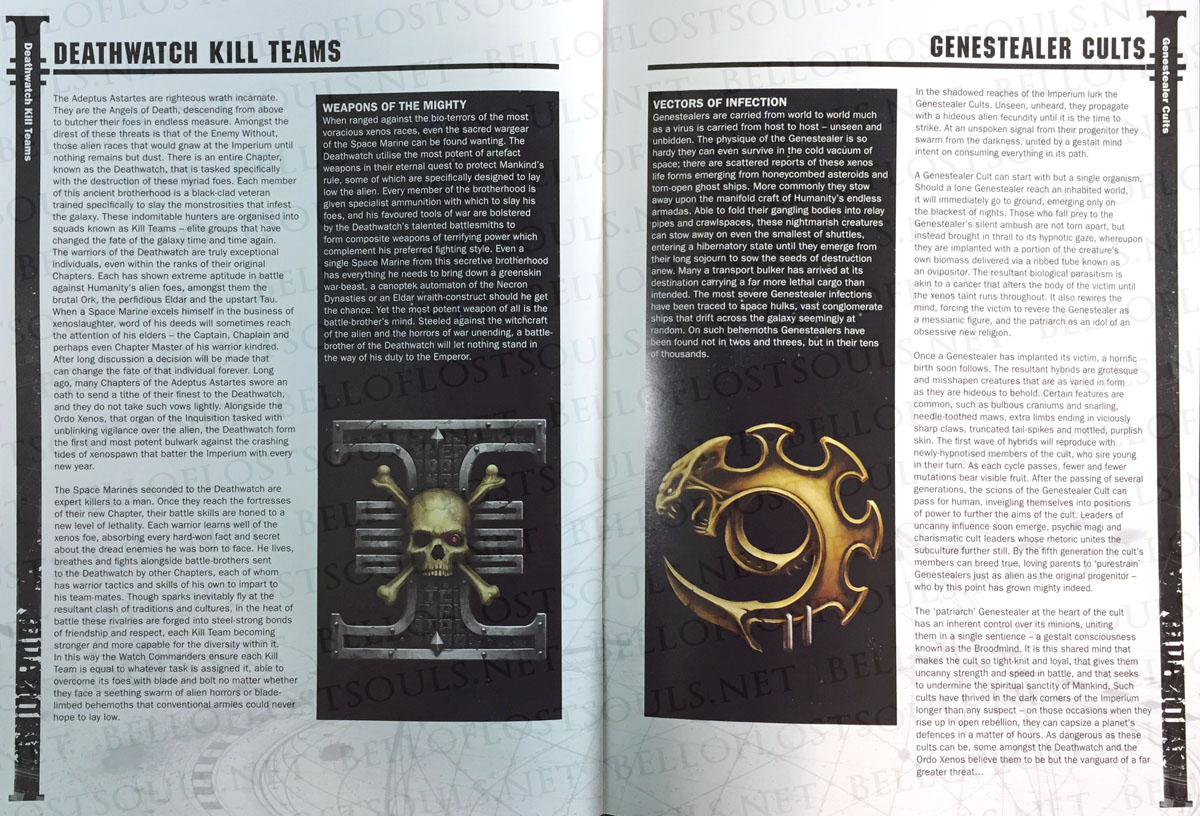 Welcome to the Grimdark new boardgame players.  Strangely this game is set in the “near past” with a young Chaplain Cassius, the the link between the Genestealers and the Tyranids Hive fleets is unknown at this time.  I bet that link will be well discovered by the time the Cult gets a full codex 🙂 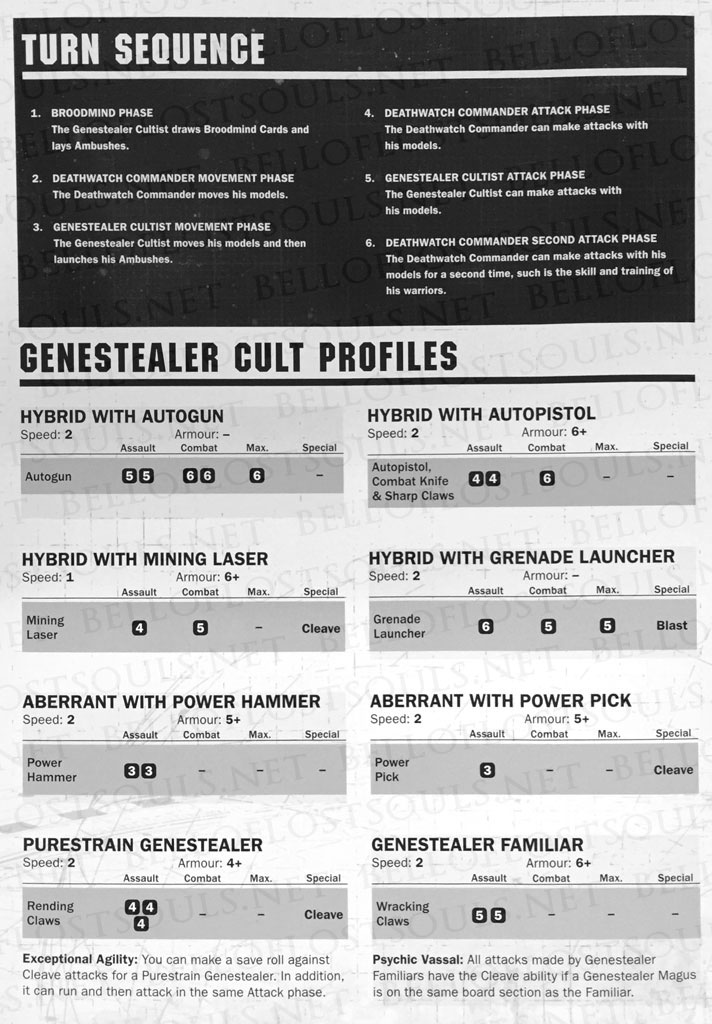 A quick reference page, giving some insight into the rank and file Genestealer Cult members.  Take note of these stats – you will get to see the Deathwatch sie of things tomorrow.

~We wrap up Deathwatch: Overkill week tomorrow with unit cards, and the stunning board itself.