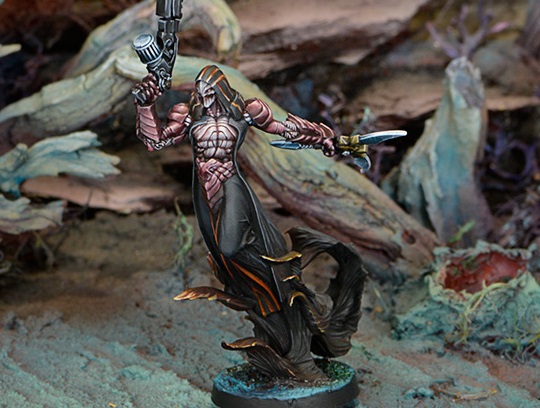 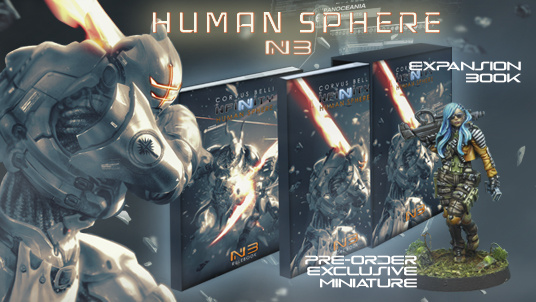 Corvus Belli shows off the new models for April!

Yu Jing advances unstoppably towards its destiny and our rivals will do anything to thwart it. This is why Yanjing remains vigilant to the outside. However, it is within, inside our own home where our enemies can easily hide themselves, spreading their venom into the ears of our citizens, corrupting them with their liberal ideas that are the antithesis of the Party’s program of well-being. To watch and monitor all subversive activity the Imperial Service has created the Kanren (Bold Edge) Counterinsurgency Group. 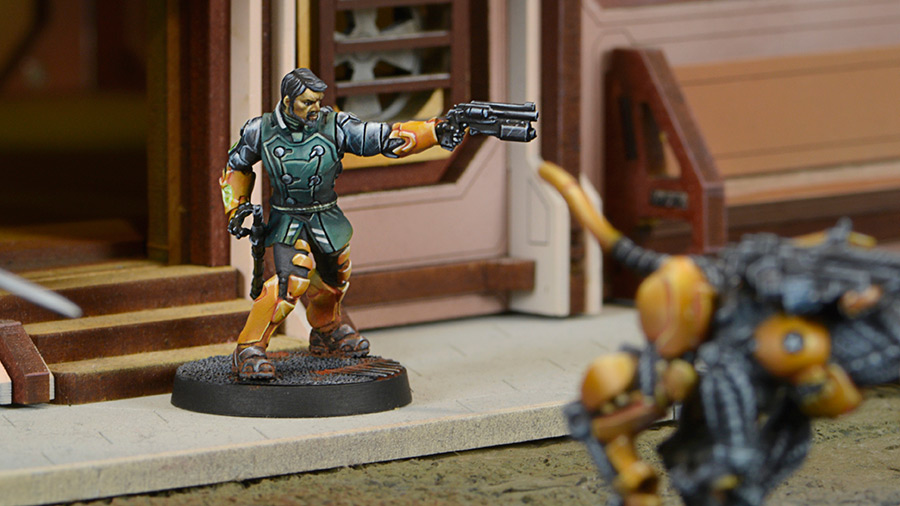 This unit is made up of brave men and women that track all kinds of insurgent, subversive, or radical groups that may want to implant themselves in Yu Jing. Their modus operandi is based on undercover infiltration into their ranks to gather information and learn everything necessary about said movements. Before delivering the blow that will break the group apart, Kanren operators identify and locate all of its leaders and members, as well as their sources of financing, support networks, and allies. In this manner, they ensure the insurgent movement is completely destroyed without any possibility of regrouping, guaranteeing the security of the StateEmpire. However, the work of these men and women is not easy, having to act without any support protecting their covers, and on numerous occasions revealing their identity as law enforcement agents prematurely in order to avoid a catastrophe. That is the type of operations they must fulfill: one of them against all of them. These operatives are therefore specialized in close combat and urban combat techniques. This is the reason behind the name of the unit, Kanren (Bold Edge), because they are the sword of justice that stands alone in the wolf’s den. 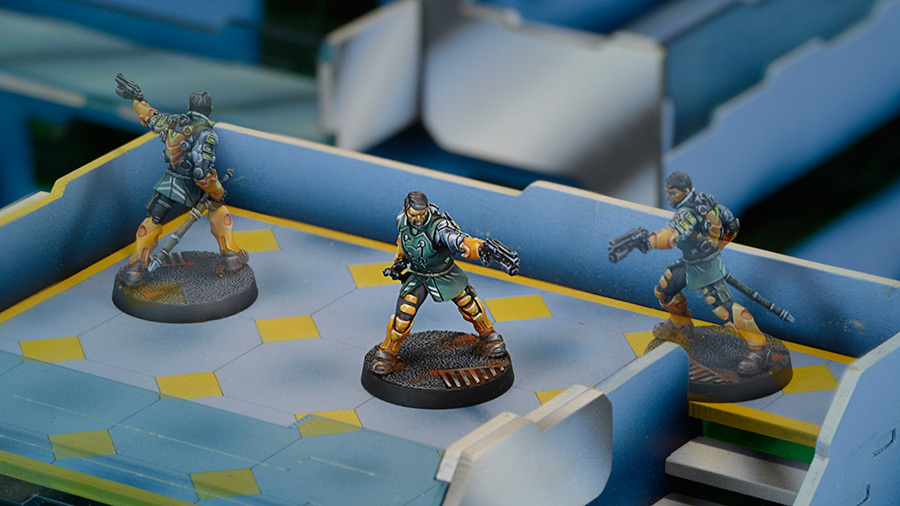 SecLock Contingencies. Online Tactic Assessment. Customer number confirmed. How can we help you? […] Are you saying that an Umbra Samaritan is following you? Can you please confirm this? Indeed. It’s not a Legate but an Umbra Samaritan. […] Understood. Now, if you have an escape route, use it right away. […] Yes, this is your certified tactical advice. Our AI confirms this option offers you the greatest chances for survival. You don’t have a clear escape route? […] 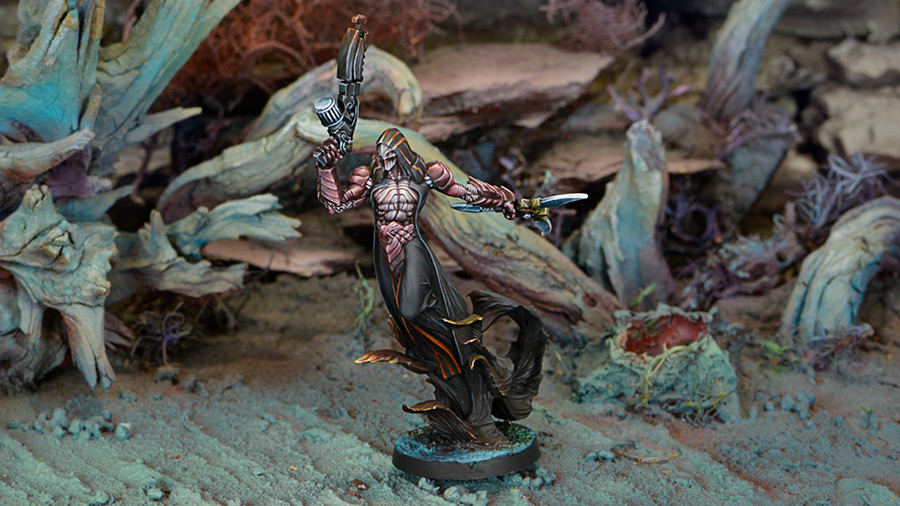 Have you optimized your skills or personal equipment since you last updated your user profile? […] Do you have boosted muscle strength, better protection, enhanced reflexes, a precise high-speed targeting system, etc.? […] No? […] Then, I repeat, find an escape route. […] Yes, sir. Your customer profile indicates that you come from a line of fighters that never backs down. […] I insist that you follow the certified tactical advice. […] Obviously, you make the decision, but if you reject the tactical advice, the compensation bonuses will be canceled in case of death. […] Okay, it’s your decision: you can follow your protocol as a private, professional contractor so that you can end up being a dead private, professional contractor. Or, you can follow the certified tactical advice to live, possibly, and finish your contract another day. […] No? You’re still rejecting the certified tactical advice? […] 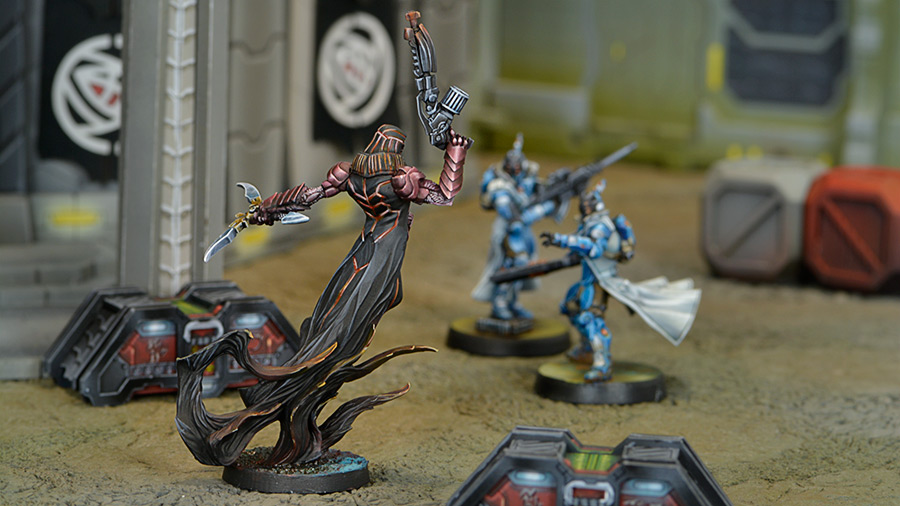 Tell me, what do you have? What kinds of weapons do you have? […] That’s not enough. […] No, that’s not enough to face an Umbra Samaritan. Our eyes in the sky confirm that one is coming close to your position… please, follow the escape route we marked through your optical visor and escape. […] No, don’t go after him! […] Professional codes of honor! They’re always an obstacle… Supervision, I confirm the death of a client… Mark it with a “Cause of Death Unavoidable: Umbra Samaritan” Code…

Foulmouthed, loudmouthed, and without the smallest sense of tact or of protocol, Colonel Voronin’s position in the Cossack Diplomatic Corps can only be understood as a façade for his position in the Stavka, also known as the Department of Intelligence. Most people think that Colonel Voronin is the living image of the type of person who only brings problems, a bearer of chaos. 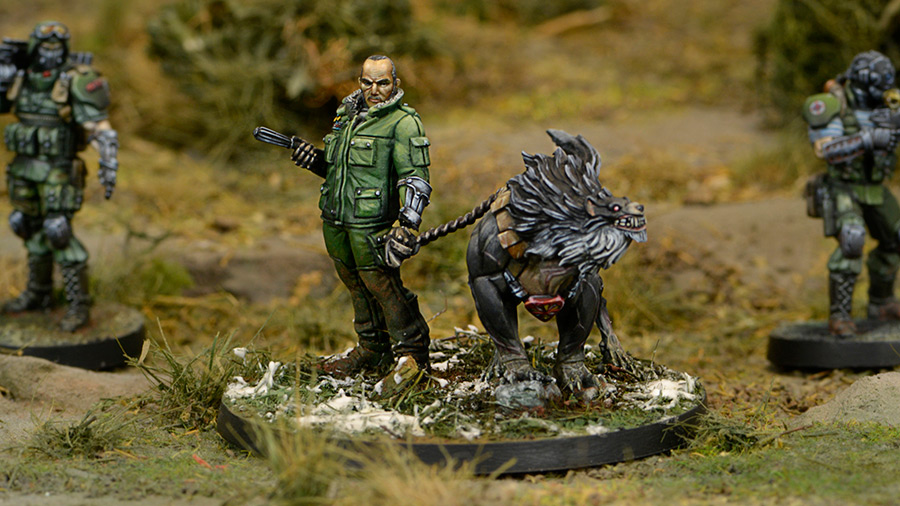 He has earned his reputation as a provocateur as much for his attitude as for his tactical and strategic planning. Voronin has a dominant personality, likes to cause chaos, and to be the eye of the hurricane: to cause everything that surrounds to him fly out of control except for himself. He has inherited the wild Cossack temperament of the steppes. When he was young he took up arms in rebellion, along with other officials of Stavka, against General Fedchenko, ending the General’s iron-fisted reign of the government of Mat’. He participated in the fourth Transtartaric Campaign, the Antipode Offensives and the Ariadnan Commercial Conflicts, and at this time, he is destined for the Ariadnan Expeditionary Corps in Paradiso. 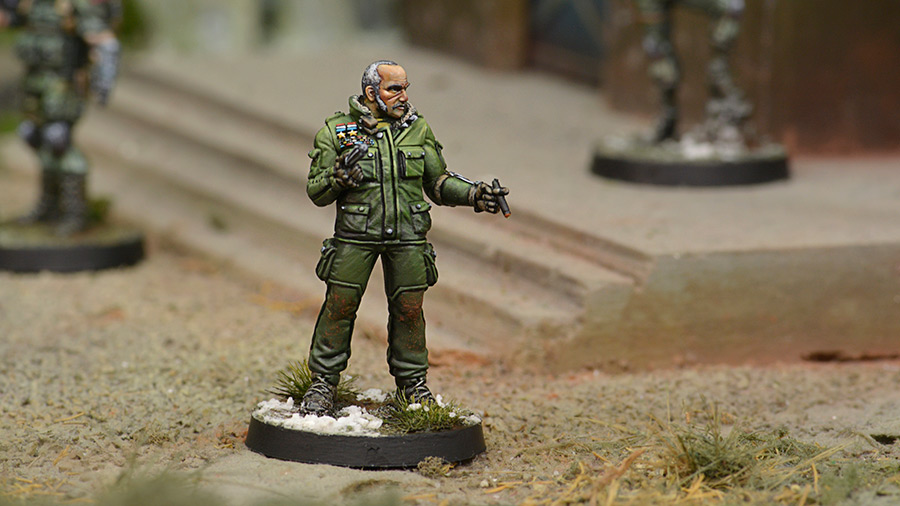 The Human Sphere is not run from Concilium. No, its destiny is shaped from the halls of Neoterra, the Great Gem of the Sphere and its financial powerhouse. 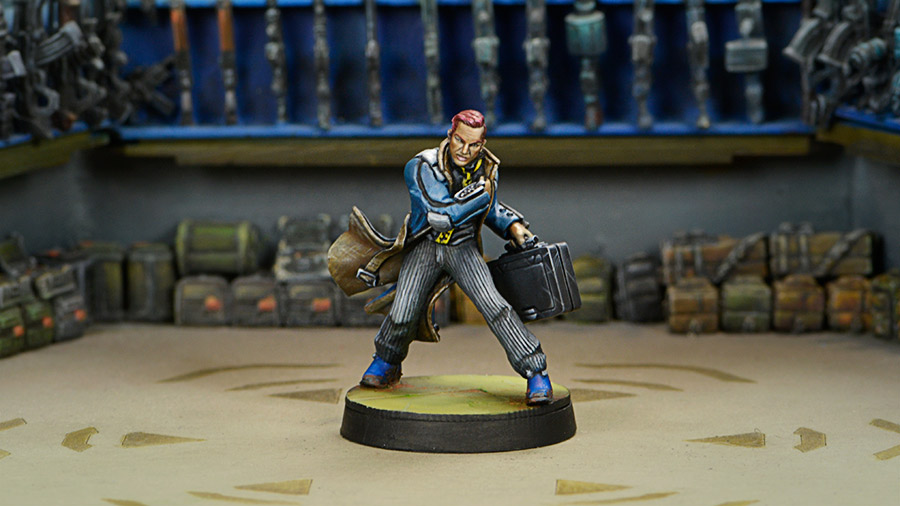 The wider issues are discussed on the top floors of Neoterran skyscrapers, where worldwide economies hinge on the ayes or nays uttered behind the closed doors of mega-corp boardrooms. Forget about policymakers, military leaders, or ALEPH; it’s Neoterran executives who call the shots, and their legions of accountants and lavishly bankrolled lawyers hammer the economic and political realities of the Sphere into submission. Considering the power at their pudgy fingertips, it should come as no surprise that the executives of Neoterran companies are some of the most self-satisfied and ambitious bastards in the Human Sphere.

Imperial Service judges are high-ranking functionaries in service of the Emperor with an authority that inspires a great deal of reverence and dread. As such, they enjoy a social standing and influence comparable to that of mid- to high-ranking Party officials. 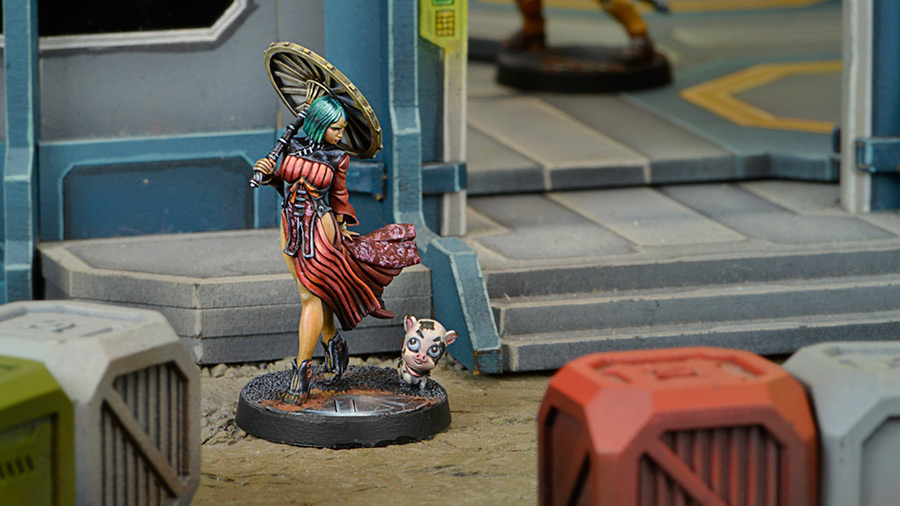 Most judges cultivate personal and professional connections to either of the two dynasties of the Imperial System. Hexahedron analysts have coined a codeword, ‘Dragon Lord’, for the small subset of judges who have consolidated most of the power around themselves via their position at the High Courts or their familial or political ties to the Imperial System.

The Tariqas are the highest-ranking counselors and advisers of the Hachib, the President of Haqqislam. They form a special advisory council with significant influence over matters of security and clearance privileges outranked only by the Hachib and the Hassassin Old Man of the Mountain. 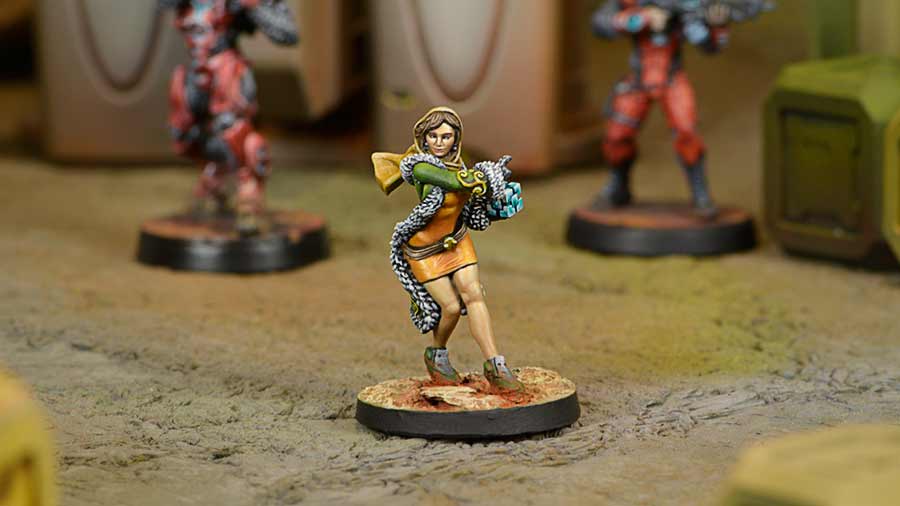 As per Haqqislamite tradition, only women may hold this rank and join the inner circle of personal advisers to the Hachib. The honorific ‘Tariqa’ connotes these women’s profound wisdom and ample knowledge, but their role goes beyond that of passive repositories of erudition; Tariqas regularly act as spokeswomen of the Hachib and representatives of Haqqislam before the O-12 Öberhaus and other international organizations.

Midnight Sun is but one of the many intelligence analysis teams employed by Black Hand. This shadowy organization opts for the application of Darwinian principles to its analysts in order to maximize the reliability of their output. Black Hand working groups are encouraged to compete against each other for the biggest output of relevant information leading to the resolution of a case or contingency. 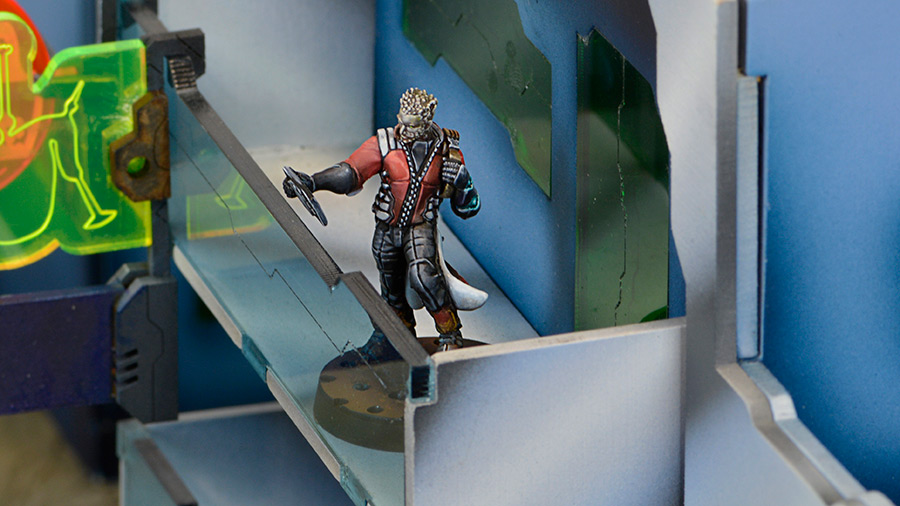 The full data stream is tapped by every analysis team, but any given snippet is comprehensibly tagged with source and usage history, ensuring equitable performance assessment. With this system in place, different teams and departments are free to share their findings without compromising the environment of competition fostered by Black Hand. With Carlos Hornoy at the helm, Midnight Sun is one of the most fecund intel analysis teams in the Black Hand retinue, and perhaps the most successful of its kind in recent memory.

ALEPH’s High Functionaries have a wide range of responsibilities as liaisons and collaborators with the upper echelons of human activity, all in service of the AI and Humanity. Depending on their specific commission, a High Functionary could be assigned by ALEPH to liaise with a government agency, take on an advisory position at an NGO, or represent the AI in the Öberhaus or any of the different O-12 institutions, among myriad possible offices. 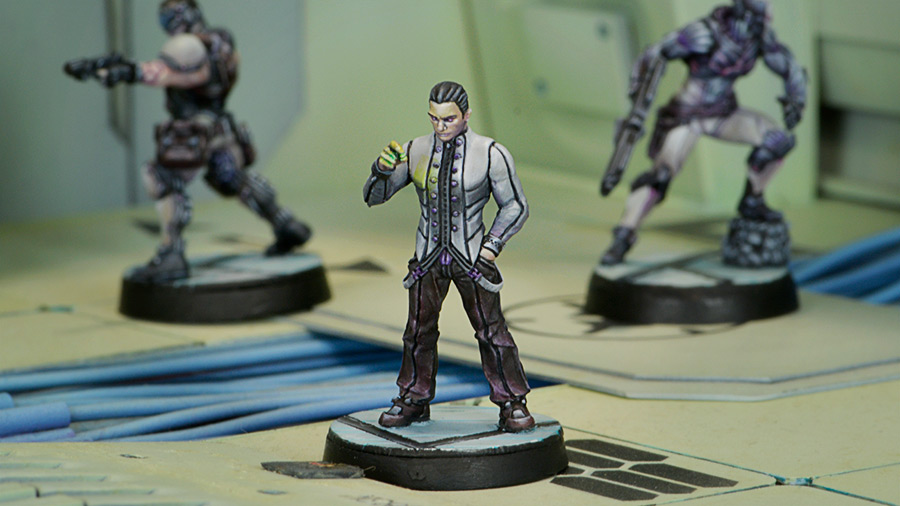 High Functionaries are generally circumscribed to purely consultative roles, but they may be asked to take on management or coordination duties, particularly when the task at hand calls for heavy data processing capabilities. Whatever their position, all High Functionaries share the same directive: to work for ALEPH and for the advancement and well-being of the Human Sphere.

This is an interesting line-up – it seems like each faction got some type of “lawyer/data hacker” unit. I guess if you’re ready to go to war in the court room or cyberspace, you’re ready for field work in the Infinity Universe! Knowledge is power after all.