Death From the Skies: Rules Spilling! 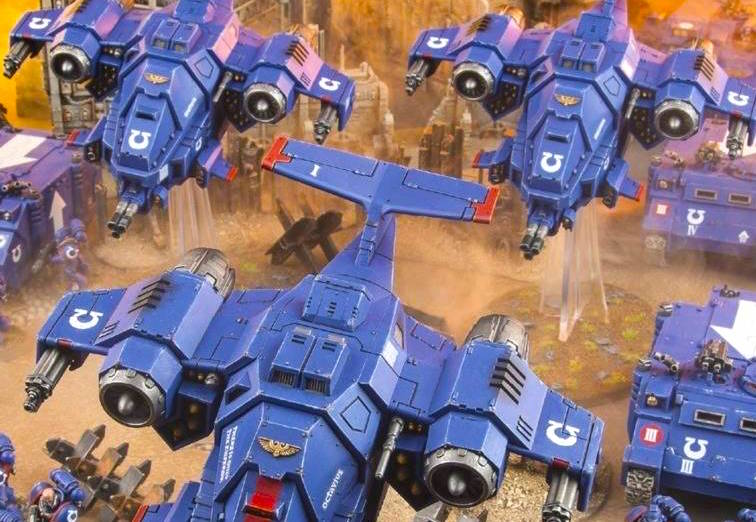 Another lucky Gamer has a copy and is spilling the bean on the rules. Come see Grimdark Fans:

Bought mine today. When are they supposed to release it anyway?

*one gets +1bs (against appropriate target) and +1 to jink save.

* Flat out and Shoot/bomb (appropriate target) at full bs

* Pick one unit that all 4 planes have LoS to. PERMANENT preferred enemy against ANY unit of it’s kind. (I.E: You pick ONE Tactical squad, You get permanent Preferred Enemy on ALL Tactical squads for the rest of the battle).

All planes in the attack pattern must be from same formation or attack wing.

Attack wing: 2-4 planes (all same). Flyers can now be bought in units of 1-4 per slot, but they only count as attack wing if they are 2+. Attack wings may use Attack patterns. One flyer gets “Wing leader”, wich is a free “Fighter ace” equivalent. Fighter ace, as we know it, is not in the book, instead, it’s a campaign bonus. (There are 3 bonuses to randomize from on the wing leader table. The campaign fighter ace has 6, and you can earn all 6 by becoming a Top Gun (Kill 30 flyers during a campaign without dying)).

NOTE: Flyers from same attack wing do not follow rules for squadrons, or count as a single unit, nor do they need to be in coherency. (unless they want to benefit from attack patterns.)

So now, you can have a pair of any flyer as a separate detachment!

2-4 razorwings is an attack wing.

1 razorwing + 1 voidraven is not an attack wing, and thus, can’t benefit from attack patterns.

However, there’s a 2 Razor-2 voidraven formation, where they all count as the same attack wing, and thus benefit from attack patterns.

The dog-fight rules only mention Flyers. So I doubt about FMC.

Haven’t looked up the vendetta (even though I have a vendetta myself. I HAVE 12 FLYERS!)

There are 6 flyer missions/Scenarios, and a mini-campaign. There’s the Flyer detachment, but no rules for turn 1 entry (unless there’s something in the missions.). So,unless you play craftworlders with FW, and have a pair of lynxes, who may start on the table, all-flyers is a no-go.

Wing leaders are pretty much on par, but slightly worse, than the old fighter aces. There are different for every army, (even for different flyers in some cases), but they are on par with +1bs vs appropriate target.

Bale flamer does what Jon Snow knows: Nothing. The whole dog fight phase, is; You roll to see who’s the attacker, the attacker picks one of his flyers (Usually a fighter), and one of the enemies (Usually a

bomber, unless facing DE shenanigans), and both must be in reserve. Then you roll dice and bluff to decide distance between the flyers, facing (Gives bonuses. If a non-fighter outmanoeuvres an enemy, it may shoot at full BS, otherwise only snap. Fighters may always shoot at full BS.), Facing affects which facing you hit and what weapons you may fire (Suddenly, rear mounted weapons got relevant), and then, who shoots first (And only shoot! No Vector strikes! Templates can’t hit flyers!). If one goes down: 2-5 It’s ded! All passengers ded to!, 1: Opponent places the downed flyer in downed flyers deployment zone, no closer than 1″ from units, then roll for crash and burn. on a 6; same, but you place your downed flier in the opponents deployment zone.

Necrons are not as fast as eldar, but fast, however, they’re not manoeuvrable, slightly more than the flying furrie containers.

Their formation lets you “Teleport” vehicles like their transport fliers teleport footsoldiers. 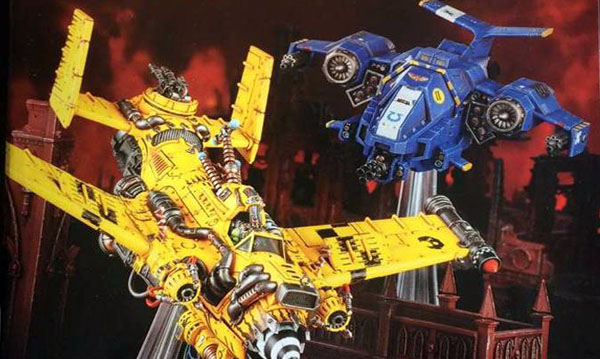 Flyer wings are 2-4 of the same flyer, or a flyer formation (of usually 4 flyers).

The Furry formation gives movement bonuses for things assaulting from the transports, and movement penalties to those hit by snowballs.

Fighters are the only ones who get to keep skyfire, but get -1bs vs ground. (the rest only snap at flyers)

Also; Bombers differ in being worse at dogfights and getting other bonuses from attack patterns.

1; The 2-flyer attack pattern gives bombers +1st on their bombs, not +1bs. And only Bombs, no other weapons. 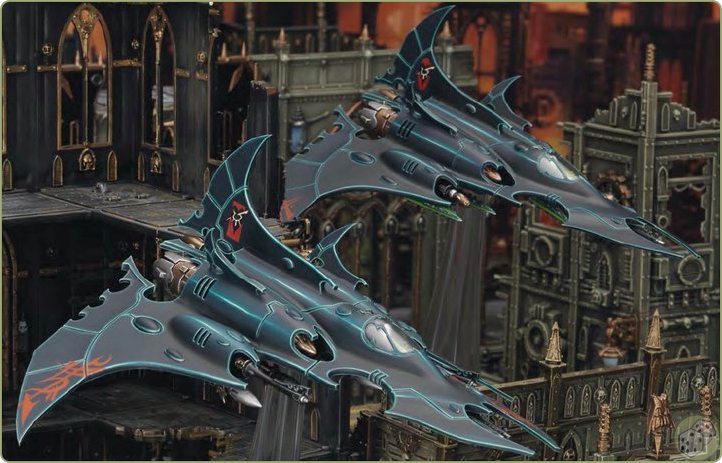 Razorwings are amongst the top tier fighter aircraft now. And -1bs on 4 large blasts isn’t that bad. (And interceptor in the DE formation).

Also, fighters do not get the -1bs against skimmers and jetbikes. Such count as “appropriate targets”(My word) for fighters, not attack craft.

FW hasn’t released their update, so I doubt the phoenix bomber will count as a bomber.

Considering that basically all flyers have been nerfed, and that razorwings “kinda got” vector dancer, they haven’t been hit as hard as every other flyer.

~More as it comes in – hit it flyboys!