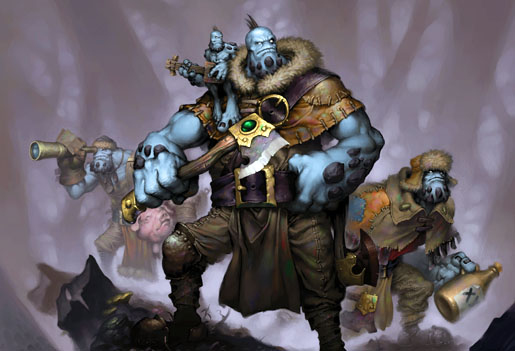 Jason Solis is back to talk all about Trollkin in V3. There is a LOT to go through:

When we approached the Trollbloods in the new editions, one of the first things we did was set about taming Tough

. In Mk II, an army of Tough models had every chance to provide a negative play experience for an opponent who faced it. At the same time, we saw Tough as a mechanism for modeling the legendary vitality of the trollkin—a concept central to the identity of the Trollblood Faction that we did not want to lose—but something had to give. And so relatively early on we settled on models losing Tough while they were knocked down. This left the potential for Trollkin models to survive blows that would fell lesser men while limiting the capacity for them to shirk off continuous blows if a player’s dice turned hot.

We also decided to streamline some of the mechanics of animi. We came to see that animi could be used strategically to reinforce the defining themes of a Faction. Instead of every warbeast in a Faction getting saddled with an ever more exotic (read niche) animus, we decided instead to repeat animi where they made sense within each Faction to give players easier access to those capabilities that we saw as central to their Factions. Furthermore, in the name of balance we also made a lot more animi “Self” only so that we could eliminate the risk of unforeseen combinations that could break the game or, more likely, limit design space. We also clearly clarified the rules for animi, closing the loophole that an animus would or would not be considered a spell whether it was cast by a warlock or used by a warbeast. Now all animi are spells all the time, no matter who cast them. With those changes in mind we went to work rebalancing the Trollbloods, starting with their warbeasts. Our primary objectives in this task were to make sure that each beast had a defined role in the army (or at least a unique set of capabilities) and to make sure that role was not overshadowed by another warbeast in the Faction who simply did the job better. Simply put, our goal was to make sure you have a reason to use every warbeast available to your Faction and feel good about using them. This is not a simple task when one considers that unlike every other Faction in the game, the Trollblood warbeasts all have a very similar anatomy and vectors of attack (claw, claw, possible vomit of death!). There is more variation even in the Farrow.

Looking over the dire trolls, we knew the Mauler would remain the go-to bruiser out of the bunch. Between possessing the Rage animus (which now only affects warbeasts) and being one of the few FURY 5 warbeasts in the game, the Mauler has remained a solid wrecking ball. Especially after having its melee range increased to 1˝. Not bad for only 15 points.

The Blitzer and the Bomber remain little changed, aside from going up to MAT 6 and getting the increase to their melee ranges. The Blitzer traded in its old animus for Irresistible Force, which grants Bulldoze to the spellcaster for a turn. The Bomber ditched its old animus for Far Strike, adding some RNG to its Powder Bombs (though Far Strike can now only target the spellcaster).

On the other hand, the Earthborn Dire Troll went through a considerable metamorphosis that firmly set it apart from the other dire trolls. Though it went down to FURY 4, its considerable elemental immunities, special capabilities, and relatively low cost make it an inviting prospect. Old age has somewhat caught up with Mulg the Ancient, and he is a lot slower than he used to be. This was another of those models that just overshadowed too many of the other options in the Faction and needed a change. We removed most of his movement shenanigans and slightly curtailed his damage output by reducing his STR to 12 and FURY to 4. His animus remained the same, and his old Affinity has been replaced with a Bond with Doomshaper that grants him Retaliatory Strike. Mulg’s a bit different, but is still hard as nails and remains the only dire troll with a 2˝ melee range.

With brutal continuity and little change, Rök simply gained a couple damage boxes (which virtually all dire trolls did) and a Bond to Borka, which grants him Stumbling Drunk. Still the stuff of nightmares at 21 points.

The Axer, Impaler, and Bouncer did not change much, while the more elemental trolls developed some keener differences in their offensive capabilities. The Pyre Troll became slightly more accurate, the RNG of its Fire Spew went up to 10, and its Flaming Fists animus went down to COST 1 and now only affects the spellcaster (as with all of the elemental troll animi).

We spoiled the Mountain King a few weeks ago, but neglected to show off its life spiral. I am happy to confirm that the beast went up to 54 damage boxes . . . as did the Glacier King. Furthermore, the Glacier King also gained Bulldoze and went up to MAT 6. In a time when we dialed back the fury mitigation across the game, the Troll Whelps remain as efficient (and chewy) as ever. Now costed at 4 points for 5 Whelps (when they aren’t being shed by Mountain Kings), these guys are like popcorn.

By this point you have likely heard that the majority of heavy infantry in the game has gone down to 5 damage boxes, and the Trollbloods are generally not an exception. However, we took some pains to ensure that the Trollbloods still stood out as an unstoppable force to be reckoned with and the Long Riders remained the only cavalry unit in the game with 8 damage boxes.

In addition to gaining 1˝ melee ranges, the venerable Trollkin Champions also had Defensive Line rewritten to provide them with +2 DEF (not ARM) while they are B2B and (still) keep them from being knocked down, meaning they retain Tough

when other models would be knocked down and lose it.

The Trollkin Warders, on the other hand, went through some changes of their own. These hardy units truly excel when supported by the Krielstone & Stone Scribes, which changed little in the new edition. That cannot be said for the Kriel Warriors, who lost their Prayers in favor of 1˝ melee attacks and Unyielding. At the same time their command attachment traded Granted: Steady for Granted: Rise (which stands models up in the unit during your Maintenance Phase), and traded In Step for Granted: Reposition [3˝] and the new Standard Bearer rule which says, “While this model is within 5˝ of its unit commander, the unit commander gains +2 CMD.”

The Trollkin Sluggers lost their damage boxes completely, as well as the Full Auto rule. Instead, they just have a flat ROF of d3, meaning they can make d3 attacks whether they move or stand still. Not bad for a point cost of 8/13.

The Pyg Burrowers went through some much needed rebalancing (as did all “tunneling” models) in the wake of new changes to the Back Strike rules . . . Did we forget to tell you about those? Well, from now on models gain the back strike bonus while they are completely within their target’s back arc no matter where they started their activation. Along with the changes to Burrow and the back strike bonus we removed Point Blank from the Burrowers and rebalanced them accordingly. In addition to the Krielstone Bearer, the Trollblood ranks are additionally supported by a number of potent solos, such as the Fell Caller Hero and the Stone Scribe Chronicler, who remain little changed in the new edition. The Trollkin Runebearer, on the other hand, traded Power Glyph for Spell Slave and a Magic Ability score of 6. Sadly, Spell Slave no longer allows models to cast Upkeep spells, but overall these changes give this model a great deal more utility (and potentially offensive punch) on the tabletop.

The previous maligned Trollkin Skinner is now a stone-cold killer. In addition to picking up Weapon Master

on the knife (picked up, not traded for), he also gained a point of STR, Ambush, and Treewalker. He did have to give up a few damage boxes, but wow! We also removed the ability to place rock walls from Janissa Stonetide. Privateer giveth, and Privateer taketh away. The special rule was just too strong on a solo in an army as tanky as the Trollbloods. In place of Wall of Stone she picked up the Raise Earth spell, which reads, “Place a 4˝ AOE template anywhere completely within this model’s command range where it does not touch a model’s base, an obstruction, or an obstacle. The AOE is 1˝ high hill terrain and remains in play for one round.”

That brings us to the Trollblood warlocks and Madrak Ironhide. It always seemed like Madrak 1’s feat was insanely aggressive and Madrak 2’s feat much more controlled by comparison, so we had them trade. That gave the guy being driven to unwholesome acts of violence by his cursed weapon the feat that changed the forces he leads into swift-moving berserkers while giving the great chieftain a more utilitarian (but still quite effective) feat. Madrak 1 was further changed when he gained . . . oh hell, I may as well just show you. While we removed Purification from all models outside the Protectorate, we have a soft spot for Doomshaper 1, so he regained an updated version of his Mk I Dissolution spell, which says, “Enemy upkeep spells in the spellcaster’s control range immediately expire. When an upkeep spell expires as a result of Dissolution, the model maintaining the spell suffers d3 damage points.” Well, we kept our word: no Purification outside the Protectorate.

We did, however, decide that it was possible to have too much of a good thing and removed Goad from Doomshapers 2 and 3, making it exclusive to the Shaman of the Gnarls. Before you weep salty troll tears for the Rage of Dhunia, it is worth noting that Doomshaper 2 picked up Field Marshal [Overtake] in its place.

How does Overtake interact with Snacking you might ask, since one triggers on boxed and removes the boxed model from play while the other triggers on destroyed? Well we made Snacking optional, so you get your choice whether to trigger Snacking or Overtake.

Calandra lost Mercy Killer. But she went up to FURY 8. That is just about the extent of her changes. Here is one more for the road.

So, we apparently also decided Captain Gunnbjorn needed to be killier. So aside from the millionth rewrite of Explosivo (which now reads, “Target friendly Faction model’s ranged weapons gain Damage Type: Magical

. If the affected model directly hits and boxes an enemy model with an attack from a ranged weapon, center a 3˝ AOE on the boxed model, then remove that model from play. Models in the AOE are hit and suffer an unboostable POW 8 magical blast damage roll

Author: Larry Vela
Dad, Gamer, Publisher, Pilot, Texan. All games all the time since junior-high. I started BoLS Interactive in 2006. I’m a lifelong tabletop & RPG gaming enthusiast, and internet publisher working to entertain and inform my readers every day. I've been playing RPGs and Tabletop Games since the 1970s. I'm been playing and covering Warhammer and Warhammer 40K for over 35 years.
Advertisement
Privateer Press Rules Tabletop News Trollbloods Warmachine-Hordes
Advertisement